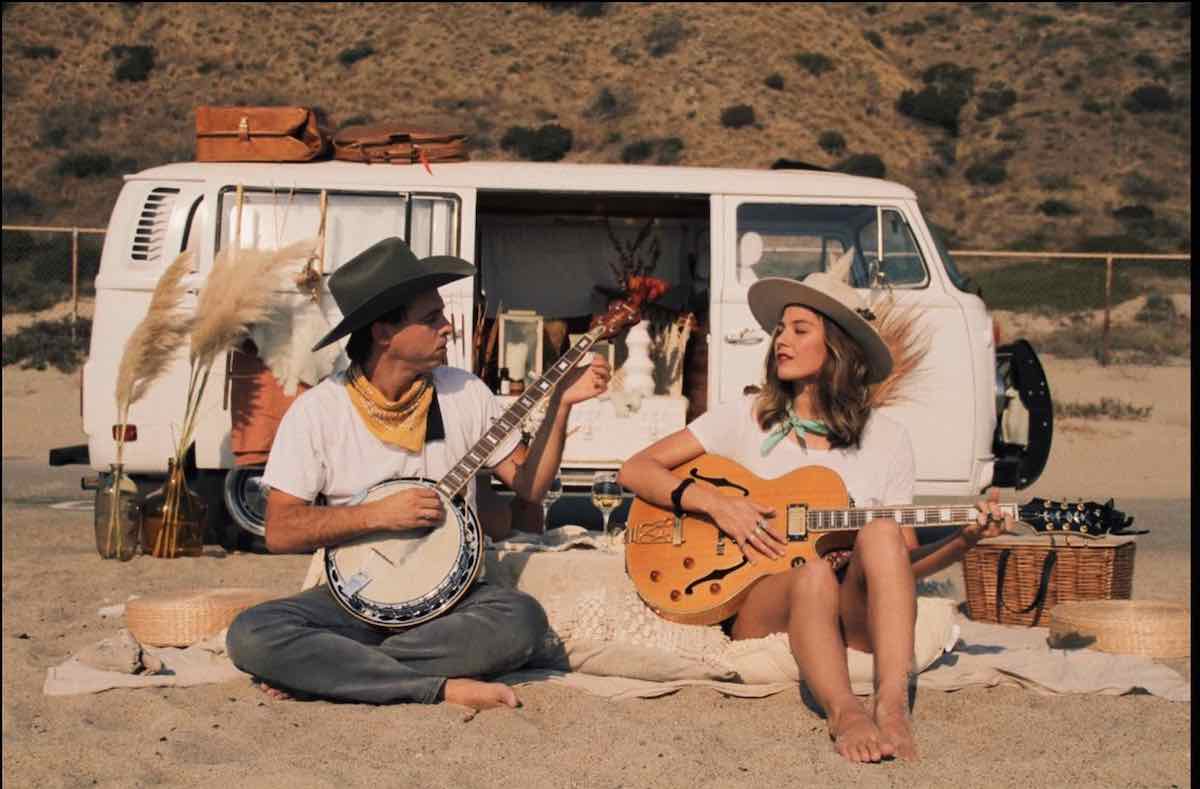 Xander Hitzig: We have a 1987 Toyota Dolphin. With surprisingly low mileage for its years, around 50,000. In short, it’s home. We were driving down by the river in the middle of the night and the timing chain slipped and snapped a tensioner and the repair had us set back for quite some time. But we got it fixed and drove it all the way back across the country to the west coast.

Nicole Olney: Yes we purchased our little dolphin 🐬 home on wheels in May of 2020. We named her Dolly. We hit the road shortly after and drove from LA to West Virginia to seek refuge from the pandemic on Xander’s parent’s farm. We made it across with no issues, but once we got to West Virginia that’s when the timing chain slipped. We were broke down on the side of the road for a couple days with no cell service trying to figure out what happened. Helpful locals would stop by and give their two cents. We would walk to the top of the nearest hill to make calls. We cooked some chicken wings on a little propane stove on the side of the road. It was special. We eventually got her towed and spent the next month or so fixing her up.

Hitzig: You don’t. Haha, truth in jest. That being said, having a full kitchen in your home on wheels can benefit you greatly in this aspect. You can save a lot by shopping at grocery stores and cooking your own meals. And if you shop wisely you can even slip in a vegetable here or there.

Olney: I try a little bit harder than Xander to get the health part in. Haha. Chia seed pudding is super easy to make and is a great snack when you’re on the road. It’s helpful having a fridge on board. But we also have a lot of fun stopping at small farmers markets along the way and getting local produce from wherever we’re at. Last summer when we drove through the Midwest in August I can’t even tell you how many corn on the cobs we ate. It was wonderful.

Hitzig: I typically wear out strings before I break them. But I would say on average I break about 1-3 strings a year. Strings are quite expensive, and so I end up playing on dead strings more often than I would like to in order to avoid spending money on new ones. If I changed my fiddle strings as often as I would like to I would probably change them about once a month, and a new set of fiddle strings is usually around 35 to 65 dollars a pack, depending on the brand. And that is just one of the four stringed instruments that I play on a regular basis.

Olney: I’m not much of a string breaker. I’ll break one a year if I’m lucky. But like Xander I end up changing them before they get to the breaking point. I’m lucky in one sense to only play guitar. Just one pack of strings to worry about and they aren’t too expensive. About 20 to 30 bucks.

Hitzig: Short answer, always changing. Wherever we are at the time. There’s usually some sort of magic in most places we dwell long enough to have a rehearsal.

Olney: Yeah we usually end up rehearsing in whatever space we are living in. Ever since we’ve been together we have been tiny space dwellers. So the spaces are pretty special in that we do all of our living in that space as well as rehearsing.

Hitzig: It was called “milkshake”, and it went “ I like strawberry milkshakes, and you like vanilla milkshakes.” I can’t remember any more of the lyrics.

Olney: It was called “no going” and it went “there’s no going where she’s gone, there’s no singing her a song, there’s no time when she’ll be back, but I’ll wait forever and after that.”

Hitzig: I can’t remember my first gig. I was probably 14. And stoned. There were a lot of porch parties and young person gatherings that I played at back then. And I can’t remember which could have been the first.

Olney: My first real musical gig was up at the Hill and Holler in Lewisburg West Virginia. Just a few days after writing the song “look at those birds”. It was like three years ago and Xander and I had just started really playing music together. I was so nervous I couldn’t believe it.

Hitzig: I’ve been doing odd jobs for years to support my music habit. From painting to construction, landscaping, tree-work, etc…But last summer I worked for one of my best friend’s tree trimming businesses called Four Seasons Tree Care as ground crew in West Virginia. Him hiring me for a couple of months helped pay to get Dolly repaired. I can’t say that I have a favorite but I definitely love being active and outdoors, so when there’s a chance to make money doing something like that it is preferable to an indoor job.

Hitzig: My last official day job I was working as a waitress at this restaurant in Venice called The Tasting Kitchen. I had worked there for the last five years and it is easily the best day job I ever had. It was a family there. Great food, great drinks, and even greater people. And the money was very supportive. I miss it.

Olney: It’s changed a lot for me because I did not consider myself a musician 10 years ago and five years ago was when I first started picking up the guitar and writing songs. It’s amazing making money to play music. Every time I make money doing it it’s so incredibly rewarding. In the coming years I expect to make some more money doing it. I hope to be playing some cool gigs where the vibes are groovy and the pay is supportive.

Hitzig: It’s hard to answer that because I feel like I am just now starting my career in music. This is the debut EP for Desert Hollow and also my debut music release in general. So it’s hard to say. If there was something I could tell my past self when I first started picking up guitar and writing songs it’d probably be ‘Don’t be too hard on yourself while you’re learning. Everybody has to start somewhere. Just have fun.

Hitzig: I wish I knew how fragile the balance of chemistry can be within a musical group, and how small a thing can shift it, and change the trajectory so completely.

The name Desert Hollow is a definition for the geographical and artistic influences of this farm fresh, California based duo. Xander Hitzig and Nicole Olney teamed up in love and music a few years back. Their story began in a jukebox country musical featuring the songs of Paul Overstreet, in which they both had lead roles. In one scene wherein they shared a song, her performance included a choreographed lap-dance for him. This play went on for about 6 months and helped to seal the deal for both of them.

Xander comes from the West Virginia countryside, and Nicole from the California desert. Both influences are prominent on their debut EP, Thirsty. Her lilting vocal seems to melt into the sturdy, eclectic musical beds of each tune. His voice is as deliberate as an old-school folkie singing with no amplification. When the two come together in harmony, it’s as if they have known each other all their lives. Flaunting a Gram and Emmylou-like confidence in their delivery, one is pulled back through the decades in a time machine made of stringed instruments only to land in present day Los Angeles’ alt-country scene.

With a gypsy spirit, the two found themselves sleeping in an old GMC van before moving into a bungalow in Venice Beach. The two consider themselves “weirdos” at heart and embrace their artist lifestyle; Xander, busking with his fiddle on Abbot Kinney Blvd, and Nicole writing poetry, stories and even a short film that got into the Cannes Festival. They can frequently be seen wearing 1950s aviation gear while riding their vespa through the streets of Santa Monica.

Thirsty was released on 14 May. Connect with Desert Hollow online and (eventually) on the road.