If you’re someone who enjoys really good blues harmonica in the tradition of Little Walter, Andrew Alli is your guy. A relative newcomer from Richmond, Virginia, when Alli blows the harp he can capture the blues vibe of the Mississippi Delta, Memphis, Chicago and points in between. 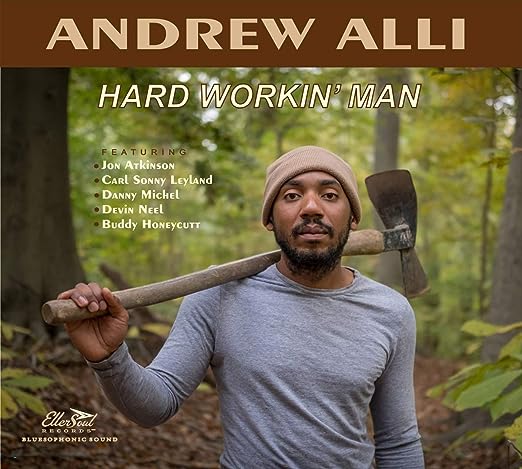 In his early thirties, Alli is part of a small youth movement in the blues that includes his occasional touring partner Jontavious Willis and Christone “Kingfish” Ingram. (Gary Clark Jr. is also in Alli’s age range, though he has arguably transcended his blues base and gained superstardom.) Alli’s his prowess on the blues harp is particularly impressive when understood that he didn’t start playing until he was about 20.

Alli is a great player who captures the sound and spirit of the music like a blues master. Hard Workin’ Man is an impressive debut (aside from an earlier self-released EP) for Alli, who wrote nine of its twelve tunes. His own songs are well crafted, and he completely captures the heart of the traditional harp tunes by “Little Walter” Jacobs, Big Walter Horton and George “Harmonica” Smith. (You can check him out below with frequent collaborator Josh Small.)

For Hard Workin’ Man, Alli was accompanied by Jon Atkinson on guitar and bass, Carl Sonny Leyland on piano, Danny Michel on guitar, Devin Neel on drums and Buddy Honeycutt on drums.