At Twangville, the Drive-By Truckers carry a lot of weight. In fact, in the post-modern, post-alt-country (whatever) era of Indie rock, they are like superstars to some. Not like in the “Oh my god, what is Britney wearing” kind of way but rather in the anticipation that comes for some in a new record. It comes from the nimble way that they have managed to exceed expectations time and time again. Each record with a story to tell or a stereotype to smash. The rockin’ three-headed songwriting team could be the best working band in rock today. It’s with that that our team at Twangville took lots of listens and found our own take on the new stuff. 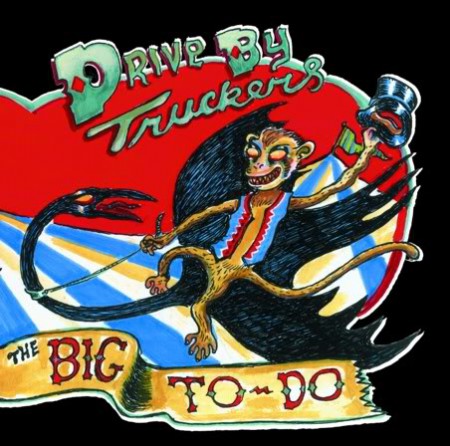 The Drive-By Truckers – The Big To-Do

If you’re a Truckers fan of the more raucous material (Southern Rock Opera, Dirty South), you’ll probably enjoy the record more than the last few. It’s a muscular rock sound that layers up them dirty guitars. It seems to lack the statement of those early records, but rocks just the same. If, like me, you love the sprawling mess of Brighter Than Creation’s Dark, you’ll be a bit disappointed. Where that record came on the heels of a lineup change and delivered in spades, the renewed expectations don’t help here.

Per usual, Cooley delivers strong rock numbers (see “Birthday Boy” and “Get Downtown”).  Patterson’s tunes are more like short stories and work sometimes (“Drag the Lake, Charlie” and “Santa Fe”), but others seem like they’d fit better in a more acoustic setting. After a surprising coming out party on BTCD, Shonna Tucker’s numbers are a bit jarring. In a record of triple electric guitar mayhem, a 5+ minute piano ballad (“You Got Another”) seems like it’d fit better on a Cyndi Lauper record (minus the 80s production). This one shouldn’t have made the cut. This record is more akin to “A Blessing and a Curse”: a shorter rock record, narrow in style and a bit short on delivery. Perhaps the songs need a tuneup on the road next time like on the Dirt Underneath tour. The record plays like that; good rock songs that don’t quite fit together in the puzzle.

If you have been anxiously awaiting the new Drive by Truckers record and have made a point to read various blog posts and magazine articles trumpeting the new album’s arrival, you have likely also witnessed the trumpeting of an alleged return to a true rocking form. While, yes, “The Big To-Do” does indeed rock out, it still possesses a few lower-key numbers; check out the album closing tracks, “The Flying Wallendas” and “Eyes Like Glue”, for examples that this new record isnt exactly 100% southern-fried Sabbath.

Ultimately, I think what many critics and bloggers are truly feeling is a sense of relief over the fact that this album is a leaner, meaner and far more efficient disc than their previous studio LP, the somehwat bloated, but still enjoyable,19 song  “Brighter Than Creations Dark.” It’s not like DBT has ever relinquished their greasy grip on their core, fist-pumping, speaker-blowing vibe, afterall. With only 13 songs on this record, they have just done away with many of the momentum killers from BTCD. Having less tracks from Shonna on this new album, along with cutting down on meandering tracks like “Bob” and “You and Your Crystal Meth” has created a cohesion that the DBT’s studio albums have lacked since “The Dirty South”.Yes, this new album rocks, but it doesn’t rock any harder than any of their other albums, it just rocks with more focus.

It started with “Southern Rock Opera,” the characters who live on the fringe of society and inhabit the haunting landscape of the Drive-By –Truckers songs became real and human. Instead of being common outlaws, badasses and drunks, they have become tour guides to the society from which they come. Racism is not the only bigotry in the South. “White Trash” isn’t treated any better.

“The Big To-Do” get’s at the heart of it. Being broke with a dead-end job and no hope of moving up can make a person desperate. The question is do you endure or start the downward spiral? The Truckers songs tell the story of the latter. We see people who out of desperation want to kill themselves or someone else; but most of them just choose to self-medicate. It may not be the right choice, but would any of us be immune given such hopeless circumstances? “The Big To-Do” will put you in their shoes, but the listeners have to decide for themselves if they would take another path. 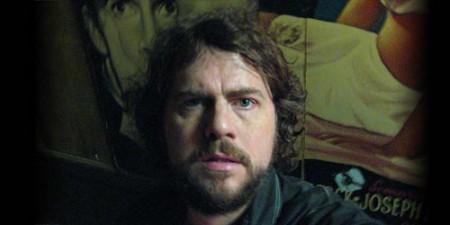 “I grew up worshipping Rock and Roll like a religion.  I know its shortcomings and strengths, but have loved in unconditionally all the same since I was eight years old.  I ran away and joined the circus and honestly, I’m still obsessed as I was as a boy.  I’m not a kid anymore, but I still remember how it felt and it doesn’t really feel all that different to me now.  I pay the price, but I get to get up there with my best friends and tell dirty and violent stories about desperate people in troubled circumstances.  I get to turn it up loud, and sometimes I even get to dance.” — Patterson Hood- January 2010

This was the last paragraph of Patterson’s note in the liner notes.  Yes, the record has liner notes.  The liner notes have the aforementioned essay from Hood as well as song lyrics and credits.  It also has a dozen or so pictures from long time DBT cover art provider Wes Freed.  My girlfriend hates the artwork.  I threatened to get a tattoo of the Big to Do’s cover.  But I digress.  It’s easy in this day and age of digital downloads and mp3s  to forget about the concept of an album,  the cover art, the mystique, and the legend.  For better or worse (and I say better), the Drive-By Truckers have never forgotten this.  They make great music, and then package it with a loving and care that makes it worthwhile to stroll down to the record store and spend your hard earned buck on a little slice of rock and roll.  It’s worth it just to savor each of Freed’s demented visions of the circus, and read Hood’s notes about recording “25 songs in 25 days” and how just “the other day my four year-old daughter asked me to play her a Clash record.”

There may be differing views on “The Big To-Do,” but just for the record, I’m for it.

See you at the Rock Show.

If there’s a pattern developing with each new album the Drive-by Truckers release in a post-Isbell era it’s that the albums are only half as good as they used to be. That doesn’t mean that brilliance doesn’t shine through, just that it’s less potent. At its best “The Big To-Do” sounds like “After The Scene Dies” where the ‘three axe attack’ is in full gear and Shonna Tucker’s vocals are best, as backup. “Birthday Boy”, “This Fucking Job”,  and “Daddy Learned To Fly” keep things alive and kicking. At its worst, the album is reminiscent of “Brighter Than Creation’s Dark” which had too many tracks that just seemed experimental. It was fun then to see Tucker take a lead role but unfortunately that playfulness is wearing thin and it sounds like “You Got Another”. All I know is I don’t want another whiny song like that. The good news is the Truckers’ songwriting is booming and a follow-up album titled “Go Go Boots” is already in the works. 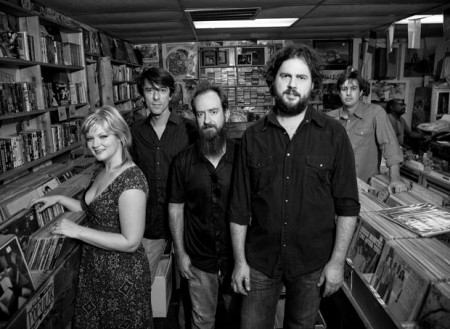 With this effort the Truckers manage to do something that hasn’t happened before…well, for me anyway.  I like Patterson Hood’s songs the best.  Especially “This Fucking Job” and “The Wig He Made Her Wear.” In the past I’d always leaned a bit toward Cooley’s and Isbell’s offerings.  “Birthday Boy” is growing on me, and “Get Downtown” isn’t bad, but Cooley has done better in the past.  As for Ms. Tucker’s tunes, well, they don’t fit and so far I’m not a fan.  It just seems to break up the album and not in a good way.

A character in a Cooley is like your favorite long-playing record from a by-gone era.  He or she is a bit warped, but you love them just the same.   Against a pounding rock beat, he tells the tale of a hooker circumspect about the life she leads.  “You got a girlfriend don’t you boy?  Nervous hands can’t lie,” she declares to the boy in question, “Married men don’t ask how much, single ones ain’t buying.”    No varnish, but with just the right amount of weathered insight.  Patterson Hood may be the more vocal “front man” for the Truckers, and a fine one at that, but Cooley is the guy that I count on to deliver the goods.