Huddie Ledbetter, aka “Lead Belly,” wrote some of the most familiar folk and blues songs of our musical heritage. Discovered by father and son folklorists John and Alan Lomax in 1933 while an inmate in Louisiana’s infamous Angola prison farm,  Lead Belly’s music was a critical link in popularizing folk and blues and, eventually, lead to rock and roll. With Lead Belly’s Gold, Eric Bibb and Jean-Jacques Milteau pay homage to Lead Belly’s genius.

Born in the late 1880s in Mooringsport, Louisiana, Lead Belly grew up in Louisiana and Texas and by his mid-teens was earning money as a musician around Shreveport. In 1918 he went to prison in Texas after killing a man, was released in 1925, but found himself back in prison, this time in Louisiana, after a stabbing in 1930. It was there the Lomaxes found him and recorded hundreds of his songs for the Library of Congress. After his release in 1934 Lead Belly went north with the Lomaxes and gained some notoriety – though never great commercial success – in the northern press as the “singing convict.” 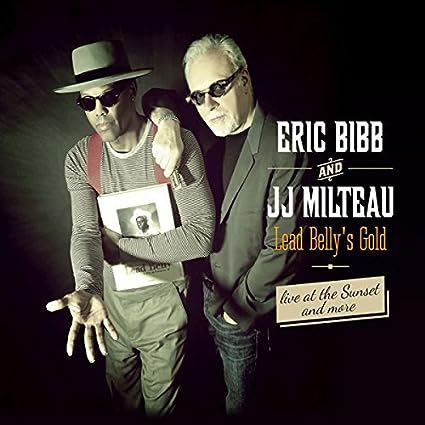 Over the years, some of his songs – many of them featured on Bibb and Milteau’s tribute – gained a second life as they were covered by many others. “Goodnight, Irene,”  “Midnight Special” and “Bourgeois Blues” are three of his best known songs.

For Eric Bibb, this homage to the great African-American folk artist is a natural step. Bibb’s father, Leon, was a prominent folk singer in New York City and his uncle, John Lewis, was a jazz composer and pianist with the prestigious Modern Jazz Quartet. Pete Seeger, Bob Dylan, Odetta and Paul Robeson were visitors to Bibb’s boyhood home, and Robeson was Bibb’s godfather. Probably destined to find some niche in the music world, Bibb became fascinated with pre-war blues.

Milteau, a french blues harmonica player, has toured the world since the 1980s. Together with Bibb, the two have woven a tapestry of Lead Belly’s great songs, along with some traditional classics and a smattering of originals, that reflects the reverence the artists feel for Lead Belly and captures the spirit of the great musician’s work. The pair were joined by drummer Larry Crocker and, on several tunes, bassist Gilles Michel and background vocalists Big Daddy Wilson and Michael Robinson.