I suppose that this review could be titled “Cooley Steps Out.” The band co-founder, who has historically contributed only a couple of songs per release, is credited with six songs on English Oceans. Ever better, they are some of his strongest songs in years.

The opening “Shit Shots Count” is classic Cooley, a guitar-fueled shot of attitude. “Pride is what you charge a proud man for having,” he barks, “Shame is what you sell to a whore.”

“Hearing Jimmy Loud” finds Cooley, well, shooting the shit with a guy named Jimmy. The song mingles tales of hardened blue collar life with life teachings like “the moral lessons of a charmed life only get through guilty ears.”

He reflects on old age with the melancholy “Primer Coat.” A jangly guitar propels the song forward as he sings, “He’s staring through his own taillights and gathering speed.”

Patterson Hood, too, serves up a fine batch of songs. His story-telling and character studies are as vivid as ever. The somber “When Walter Went Crazy” is the dark tale of a husband and wife who have drifted apart and whose lives have spiraled into darkness. “When Walter went crazy he had rattlesnake in his eyes,” Hood explains, “blended whisky in his veins and murder in his heart.”

Hood’s “Pauline Hawkins” starts with a brooding guitar and snare drum beat before exploding into a piano-fueled rave-up. The song, inspired by a Willy Vlautin novel, tells of a fiercely independent title character warning companion, “I won’t let you cage me or lock me away.”

Album closer “Grand Canyon” is an epic and moving tribute to a longtime friend of the band who passed away last year.

Dark Night of the Soul, by Jimbo Mathus 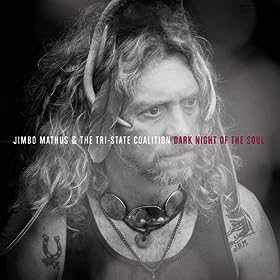 The latest album from Jimbo Mathus has an interesting backstory. The artist was given access to a studio near his home for nearly a year to work on the release. With the time and freedom to explore, Mathus emerged with an album that is a bit darker and more rocking than his recent work. As he so brilliantly describes it, it is “more ultra chrome and less sepia tones.”

The song collection hearkens back to the finer moments of the 1970’s rock era, calling to mind a number of the finer artists from that period.

“Tallahatchie” has the musical feel and storytelling style of a long-lost song from the Band while “Casey Caught the Cannonball” would fit well in the Little Feat cannon.

“Fire in the Canebrake” has a mighty fine Neville’s groove. A simmering organ and some funky guitar propel the song towards the forceful chorus.

Mathus showcases his mountain country roots on “Hawkeye Jordon,” the tale of a happy-go-lucky moonshiner.

“Rock and Roll Trash” is, well, a dirty ol’ rock and roll song with a Faces vibe. “Yo mama say she don’t like the rock & roll, your friends say you ain’t nothing but trash,“ he sings as guitarist Eric “Roscoe” Ambel joins in with a healthy dose of electric guitar and harmony vocals.

The album may have dark overtones, but it sure is a whole heap of fun.

Half the City, St. Paul and the Broken Bones (from the Single Lock Records release Half the City)

Last fall we chronicled some of the incredible music bubbling down in Muscle Shoals, Alabama (read more here). St. Paul and the Broken Bones were among the up-and-comers featured on the list. Well, fast forward a few months and the boys and have finally unleashed their debut album. Damn, if it don’t sound good.

This is old school soul in all its glory. Horns figure heavy in the mix with just the right amount of electric guitar added to usher the melodies along.

And then there is vocalist Paul Janeway. Upon first glance he looks somewhat academic with his blazer and glasses. Any impression that he is quiet and subdued, however, disappears when he opens his mouth. His voice is equal parts honeyed gospel and gritty soul shouter.

Jonny Wickersham, aka Jonny Two Bags, is known to many for his work with Mike Ness as a member of Social Distortion. Well, the time has come for Mr., um, Two Bags to step out on his own. Based on the strength of the songwriting on his debut release, one wonders why he didn’t do so sooner. These are honest and heartfelt songs about striving for, but not always achieving, happiness.

Wickersham is joined by a veritable all-star cast that includes Jackson Browne and David Hidalgo (Los Lobos), among others.

I Know It’s Wrong (But That’s Alright), Hurray for the Riff Raff (from the ATO Records release Small Town Heroes)

There’s a wandering spirit that wafts through songwriter Alynda Lee Segarra’s songs. Perhaps this isn’t surprising given Segarra’s history. She set out from her Bronx home at the age of 17, heading west and eventually settling in New Orleans. She and her talented collective of musicians perform with a loose and jammy feel. Their performances ebb and flow, filling Segarra’s songs with grace and charm.

Though Segarra is still a young 27, she has an old soul. That’s a glorious thing for a folk singer, for sure.

Adams is a songwriter’s songwriter. His songs are brilliantly crafted yet they possess a raw honesty. The title track of his latest release is a great example. A simmering tension makes for an evocative song.

Violet, The Damn Choir (from the self-released Creatures of Habit)

With a name like the Damn Choir, it isn’t surprising that this Chicago-based sextet has an edge. Yet there is a brilliant majesty to their music. Some of this comes from the contrast between Katy Myer’s elegant cello against singer-songwriter Gordon Robertson’s impassioned vocals. Robertson writes from a place of honesty and raw emotion, which the band brings to life with a sound that is as graceful as it is intense.

I like my Americana with a rock edge and damn if White doesn’t hit the spot with Old Postcards. The songs on her latest release are fueled by driving drum beats and plenty of electric guitar. Throw in White’s weathered songwriting and vocals and you’ve got a keeper.