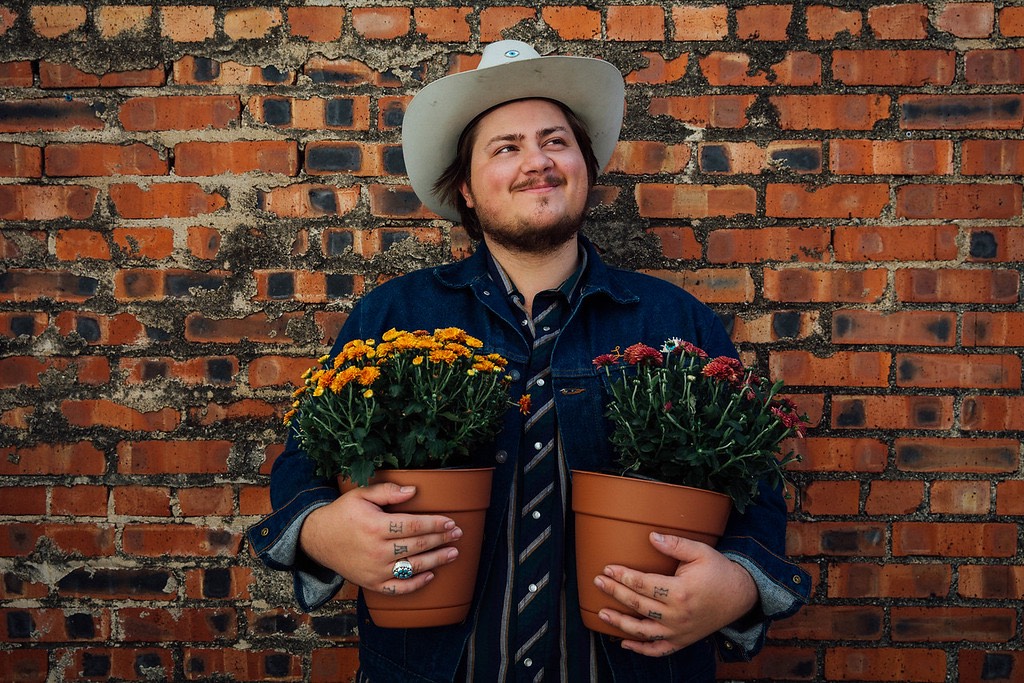 We travel in a 90’s Chevy van. It’s been very well taken care of, so we haven’t had any issues with breaking down. Before this van, we were kind of traveling in whatever vehicle we could borrow, or make due with. We were riding in my drummer Will’s pickup truck, and the wheel caught on fire. We were stuck in Arkadelphia Arkansas for a couple of days until we could get it fixed. Luckily ol’ Will is a knuckle buster.

Still trying to figure out how to do that when I’m not on tour, too.

Vegetables? Water? It’s easy to eat easy. Sometimes that’s all you can find. I usually try to carry some canned goods with me, or peanut butter. Get back to me later on this one.

Haven’t broken a string yet.

I don’t have a rehearsal space at the moment. We don’t rehearse that often actually, because we’re playing so often. And when we’re not playing, we’re usually pretty busy doing non-musical things. I’m a leather worker, and a part-time songwriter.

The first song I wrote is called “7 Come 11”. “I rolled into town, and I laid my money down, on a game that was made to lose. Everything I have, I can carry on my back. I don’t want nuthin’ I can’t use.”

I honestly can’t remember the first show I played. It might have been at The Grotto (now closed) in Fort Worth. They turned it into a fast food restaurant.

I’ve had a lot of day jobs, but I’m pretty proud to say that I’ve been making a living off of my music for about 7 years now.

I think the last one I had was washing dishes.

Money comes and goes. The thing that’s worth the most to me is being able to connect with people through music. I’ve never been great at that without it. I’ve been fortunate enough to meet a lot of great people out on the road, and in 5-10 years I hope I’ll have enough friends to fill a football stadium. That’s where I see myself.

I wish I’d started playing music earlier. I picked up a guitar when I was 18, and started writing at 20. I wish I’d have started a lot sooner. I might be a little better off now.

Vincent Neil Emerson has been playing in the Honky Tonks and bars of Fort Worth since he was 20 years old. Born in the pines of East Texas, Emerson was raised in Van Zandt County, by a part Native American single mother, of the Choctaw-Apache tribe of Ebarb, in Northern Louisiana. He left home at 16, and traveled his home state, picking up odd jobs along the way. Eventually he picked up a guitar at 18 and started writing songs, unexpectedly making a career for himself as a gigging musician and a songwriter. His musical influences range from the Texas Folk of Townes Van Zandt, Blaze Foley, and Guy Clark, to the Classic Honky Tonk and blues songs of Webb Pierce, Ray Price, and Hank Williams. With deep respect for both genres, Vincent blends these two musical styles into a repertoire of original material that can make you laugh, cry, and dance all in the same song.

Fried Chicken and Evil Women, his debut album, will be released on 13 September. Connect with Emerson online and on the road.