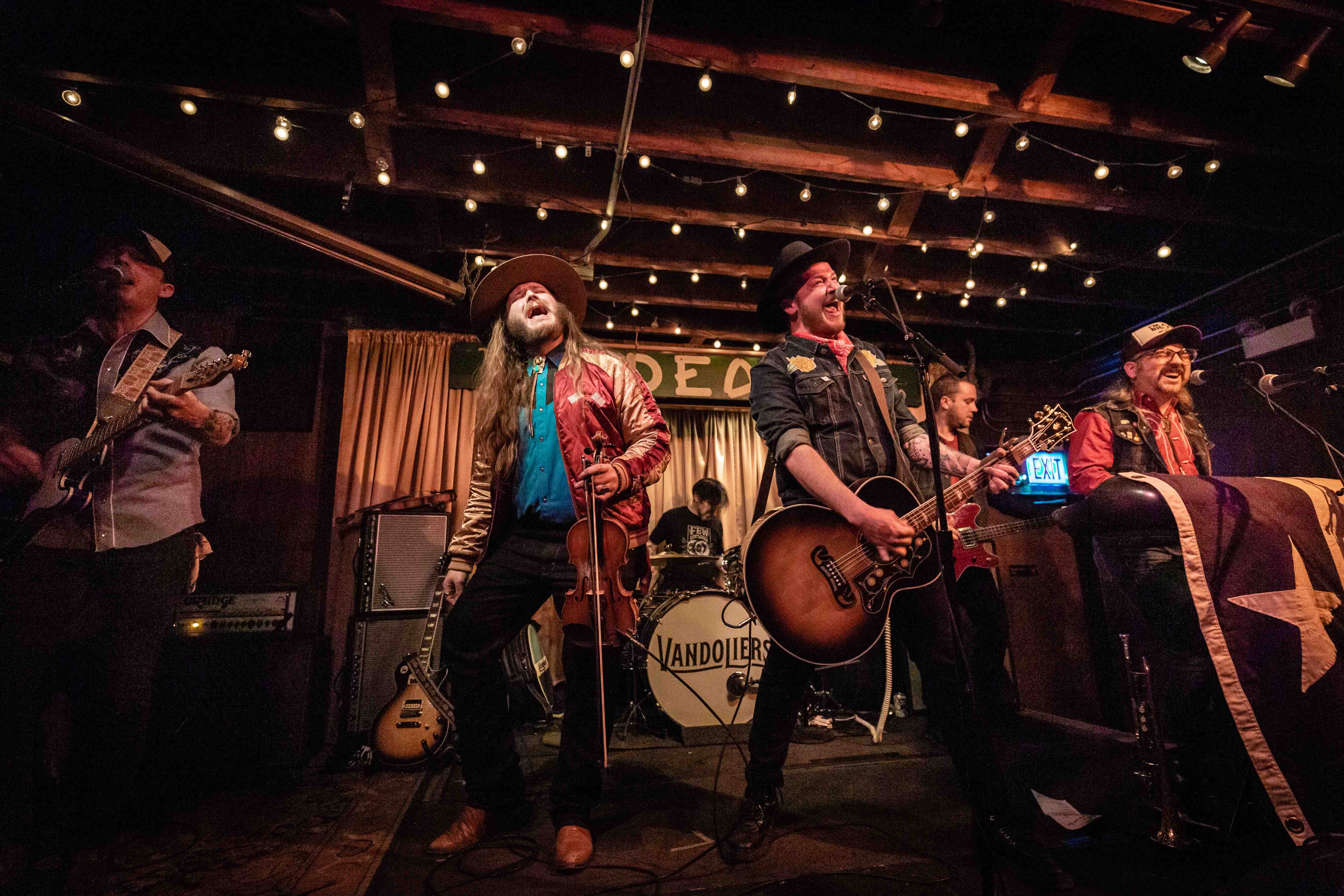 We are currently on our third van, after our first two left us stranded multiple times. This time, we decided to spoil ourselves with a gently used Ford Transit that we’ve already put 50K miles on. Her name is “Vannah Montana”, and we try to take care of her, because we know what it’s like being stuck on the side of the road.

Taco Bell and the Feed the Beat program have been life savers these past couple of runs. Travis Curry (fiddle player) is our compass when it comes to food, the man knows how to eat. We have started eating cleaner on this last trip, being out west made it easy — it’s easier on that side of the country to trade the jerky and Red Bull for fruit at the gas station.

Travis has the most expensive strings, $120, I haven’t seen Travis break a string in a minute. I will break a few, but I change my strings when the start to sound dead or won’t stay in tune, my strings are between $10-$15. I use D’Addario in the studio and Elixir Polyweb on the road.

Since we are on the road, typically we opt to just rent an hourly room to run new songs or rehearse the set after a long break. As far as rehearsal stories, we typically save all of the crazy shenanigans for tour when we are passersby with no accountability for our hedonism.

I wrote a song called “One Day Left” when I was 12 years old. It was a song about getting out of school for summer. I played at my middle school talent show.

I was in a band called Duck Tape that played a New Years Eve (2000-2001) party at a roller rink. We were one of three bands, a bunch of kids from a bunch of different school were there. I got my first kiss that night, I was hooked.

My last job was as a barber. I loved my clients, and the craft was interesting. Being a musician has been my passion my whole life and this experience has been incredible. I didn’t stop working till there was no other choice.

I assume my current struggles now will morph into similar struggles later, but we are seeing growth. People are coming to see us in every city and every state. I can’t tell you how many times I’ve performed for no one. I’m lucky people want to hear my songs and watch us play at the moment.

Somebody great recently told me “compare and despair,” which is to say you should just keep doing you and not worry so much about what everybody else is doing or how your career is advancing relative to your peers. I’d tell young me to just keep writing, and to keep in mind that no means no, maybe means no, and yes means maybe.

Formed in 2015, the self-proclaimed “Converse cowboys” emerged from a group of Dallas-Fort Worth musicians who’d already logged more than a decade in their own punk and folk bands. Vandoliers mix raw, rough-edged roots music with the focused, fiery storytelling of frontman Joshua Fleming.

Behind him, the band (bassist Mark Moncrieff, drummer Guyton Sanders, fiddler Travis Curry, electric guitarist Dustin Fleming (no relation), and multi-instrumentalist Cory Graves) kick up plenty of fast-moving dust, filling the songs with train beats, gang vocals, blasts of brass, and bursts of guitar. Vandoliers’ sound is truly a tour of the many subgenres that originated in the Lone Star State, from outlaw country to Texas swing, electric blues, and even Tejano. At the same time, it’s a twist on those familiar sounds, delivered with a wink of the eye and a bang of the head. (As the Dallas Observer amusingly asserted, it’s “as if Calexico and Dropkick Murphys got together for a fiesta.”) It’s twang and tattoos, grit and guitars, honky-tonk and horns, Tejano and Telecasters. It’s Vandoliers.

Vandoliers’ first two albums Ameri-Kinda (2016) and The Native (2017) were released on State Fair Records. The band has toured with such country and rock-n-roll stalwarts as Marty Stuart, Lee Ann Womack, Old 97’s, and Reverend Horton Heat.

Forever, their Bloodshot Records debut, was released in February. Connect with the band online and on the road.