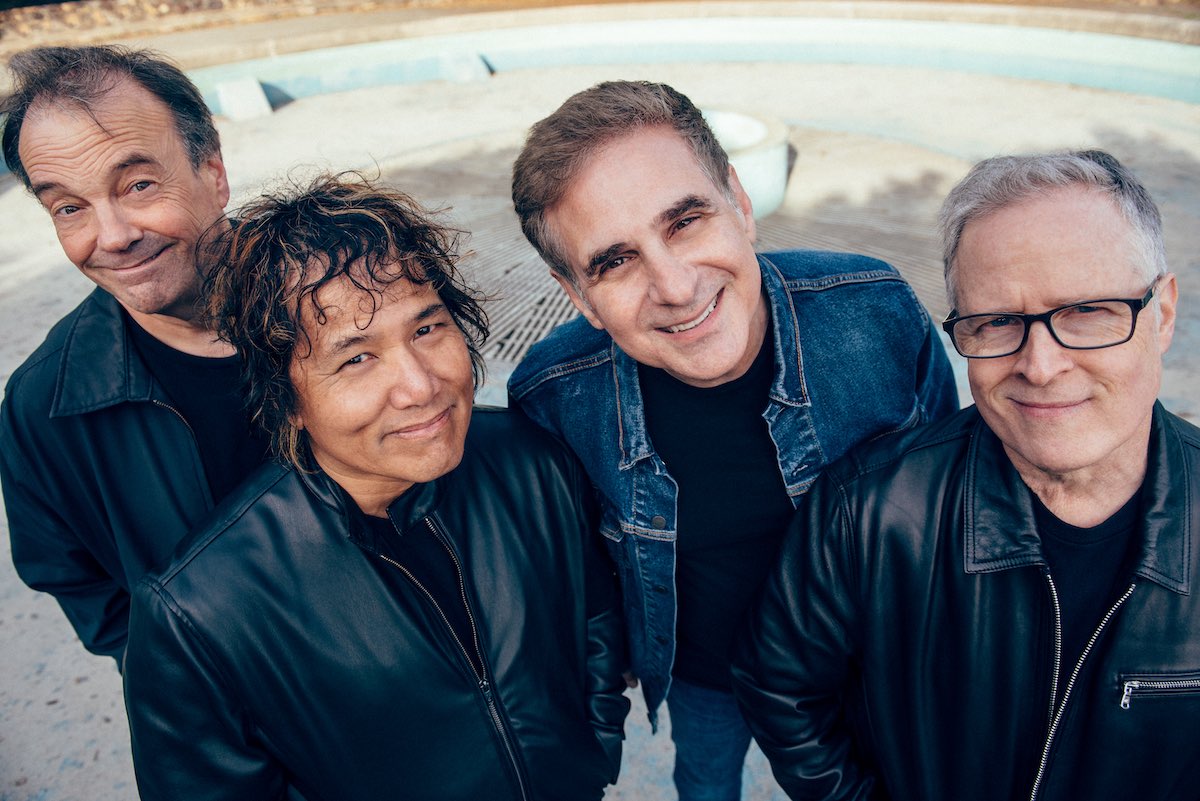 Well, our band The Rubinoos has been playing since 1970, so there have been a lot of vehicles. Since 2000, most of our touring has been in Spain, where our main man Jonathan Vidal takes us from town to town in a Mercedes Sprinter van called The Blue Whale.

Back in the late 70s we did about 15,000 miles in a Winnebago while following Elvis Costello to 56 U.S. cities on the Armed Forces Tour. I hate to think what kind of mileage we were getting! It was nice to have a bunk to curl up on for the long rides.

Right before Covid-19 put a damper on everybody’s tour schedules, we rented a Dodge Caravan to play our way from Los Angeles to Seattle. Sweet ride, no breakdowns!

Who said we eat cheaply? Don’t you believe it! It’s kind of weird, because I’m a vegetarian, but our bass player insists on eating Pork Rinds on the road. Vive La Difference! When we’re in Spain we do frequent the falafel places. Also, we dine at the Autogrill while filling the tank. Much Spanish Tortilla, fresh orange juice, and espresso. Don’t forget Patatas Bravas!

I made 2 towers from empty Dannon yogurt containers in our road manager’s kitchen one time. I was just trying to help him clean out his fridge. After that, we started staying in a hotel instead of his place. Don’t know if those facts are related.

I break about 6 strings per show, because I usually rip them all off of my guitar for the last song. (Not kidding!) Not sure how many that is per year. 6 times something!

Like so many bands, we started out rehearsing in a garage. The neighbors were pretty tolerant, although we did get a visit one time from a policeman who told us that our “impedance was too high”. From there we moved on to our new drummer Donn’s mom’s house, and after a few years there, we moved on to our bass player Royse’s parent’s house. I have to say, I didn’t fully appreciate how tolerant Donn’s and Royse’s parents (and the neighbors!) were. I can’t imagine having a loud bunch of teenagers blasting away in the basement 5 days a week. I’m sure a lot of our fellow musician’s out there have similar stories. Let’s hear it for all those tolerant moms and dads!

These days we rehearse at a place called Ice House Recording in San Rafael, California. It’s run by an amazing guitar player named Tal Morris. The room is very nice with a good P.A./monitor system. Tal also provides us with guitar amps and drums when we’re too lazy to bring our own.

The title of my first song was “You Turned Your Back On Me”. I was 7 years old, the name of the band I had with my brother was The Atmospheres. We had a cardboard box for a snare drum, and another box with a tambourine on it for a cymbal. You whack that box hard and the tambourine jumps. That’s the secret sound. The lyrics were (actually, they still are, I have made no changes!):

Dang, two Beatles titles crammed into one verse! The song was only about 30 seconds long, but that was before F.M. radio and album rock.

The chord progression was whatever chord you want to call “regular tuning” on guitar being strummed with a continuous stream of open string eighth notes. I don’t think we’d noticed the whole thing with frets yet.

We put The Rubinoos together in 1970 to play at our high school hop (The Bay High Hop.) We were playing all oldies, like Peppermint Twist, The Locomotion, Great Balls Of Fire, Let’s Twist Again…..

Come to think of it, can you call it a gig when you’re not being paid? Our first paying gig was at Fort Bragg and the pay was $80. It was about a 6 hour round trip. Since we didn’t drive yet, we had to rope our friend Chaz into driving us in Jon’s dad’s car. I think we played for 2 hours in a gymnasium. But hey, it was a gig!

My day job is doing production work in my basement studio. Other than being in The Rubinoos, it’s my favorite job. Every day it’s something new. I do tracks for singer songwriters, mainly guitars, background vocals, keyboards, whatever I can talk them into letting me play. I occasionally turn in a horn section consisting of me on trumpet, alto sax, and tenor sax. I always warn them about how foul I am before taking the gig, though! I wouldn’t wish my horn sound on anyone, but I am up for the challenge!

I’ve been lucky with the production work. It has kind of snowballed just by word of mouth for the last 20 years. No complaints, it’s a living!

I think the biggest thing I’ve learned is the importance of pre-production. When we started out, we’d rehearse 5 days a week and play out on weekends. So, when it came time to record, we’d been rehearsing and playing the songs in front of audiences for a good while. Better to work out the kinks in the practice room than in the studio!

On November 2, 1976, Jimmy Carter was elected President of the United States. The events of November 3 were less earth-shaking, although it was the day the power pop pioneers The Rubinoos recorded this album. The group walked into CBS Studios on Folsom Street in San Francisco to, as band co-founder and singer Jon Rubin recollects, “have a ‘set up and get comfortable in the studio’ kind of affair.” Guitarist Tommy Dunbar, who started the group more than 50 years ago with his childhood pal Rubin, recalls they were told “something like, ‘okay, the tape is going to run, just go ahead and play anything you want’.”

The CBS Tapes (due out on June 25, 2021 on Yep Roc Records) chronicles that occasion, and its previously unreleased 11 tracks certainly reveal a wildly diverse set list that includes, yet reaches beyond, the power pop that the band is well known for. Selections range from the Modern Lovers (“Government Center”) to the Meters (“Cissy Strut”); King Curtis (“Memphis Soul Stew”) to the DeFranco Family (“Heartbeat, It’s a Love Beat”). The Rubinoos also tackle the bubblegum classic “Sugar, Sugar,” the iconic surf instrumental “Walk Don’t Run,” and a couple Beatles tunes (“She Loves You” and “I Want to Hold Your Hand”), along with a trio of now-rare originals (“All Excited,” “I Want Her So Bad,” and “Nooshna Kavolta”).

The CBS Tapes captures something unusual — a look into the recording process before it begins in earnest. This isn’t a lo-fi sloppy rehearsal tape, a stripped-down demo, or a polished finished product. Done without second takes and overdubs, the band’s loose, unencumbered live performances exude a joyful energy that embodies the band’s spirit. These recordings do benefit from Glenn Kolotkin’s engineering and mixing on the fly. By 1976, Kolotkin had already worked with acts like Janis Joplin, Journey, and Jimi Hendrix, and would go on to produce Santana, Joan Jett, and the Ramones.

Although still teenagers in 1976, these guys weren’t inexperienced. Dunbar and Rubin first formed the Rubinoos as 13-year-olds in 1970, so they could play a dance at their school, Bay High School in Berkeley, California. Spindt took over on drums a year later while Ader became the bassist in 1974. The band joined the fabled U.S. indie label Beserkley Records (Jonathan Richman & the Modern Lovers, Greg Kihn), through Dunbar’s brother Robbie, the guitarist in Beserkley’s first signee, Bay Area rock stars Earth Quake. The Rubinoos’ cover of the DeFranco Family’s “Gorilla” appeared on Beserkley’s Chartbusters sampler.

Connect with the Rubinoos online.