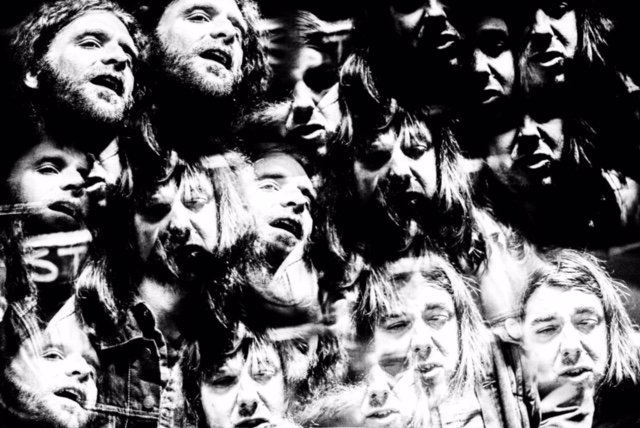 Adam Williamson: The first vehicle that I ever toured around in was a mid-nineties Mercury Mountaineer. It had an enormous eight-cylinder engine that got about ten miles to the gallon. I literally paid one dollar for it from a neighbor that was looking to get rid of it. Blake and I were once on our way to Nashville to open for Guitar Wolf and the radiator cracked. We stopped and bought about fifteen gallon jugs of water and had to constantly pull over and fill the radiator up.

Another tour van that is dear to our hearts is Lee Bains’ Ford. It has over four hundred thousand miles on it. A few years ago we were pulling into Little Rock Arkansas and the transmission went out. We could only get up to around forty miles an hour so it took us about twelve hours to get back to Birmingham. It was hysterical in hindsight. That repair cost a small fortune in Rock and Roll dollars.

Blake Williamson: For years Adam and I have used his ole Mercury Mountaineer as band transportation. It was basically a free vehicle from a friend who moved away. About 260,000 miles. It was surprisingly reliable. We did lock the keys in it, outside Egans bar in Tuscaloosa one time. We had to break in, but we managed.

Adam: As far as eating health on a budget while touring we usually look to have whatever the region has to offer for lunch and more times than not the club will have some food for the bands. We just try and avoid fast food if at all possible, except for the occasional late night Taco Bell run.

Blake: This is something that we rarely worry about. We feel that finding good regional food is one of the things that makes touring fun. Food is a great way to experience culture in different places. It’s the one thing we don’t mind splurging on.

Adam: I’ve never been a huge breaker of strings. If I’m playing every day, I’ll change guitar strings at least once a week, maybe twice. And bass strings only get changed when one breaks, which is about every two years. I love the sound of old dirty bass strings. Cymbals are a whole other animal. You can’t help but crack them because you’re beating the shit out of them every night. It happens at least a couple times a year and they can get expensive.

Blake: Being a drummer mostly, I’m good to break at least 2 maybe 3 cymbals per year. Ride cymbals especially tend to bite the dust with me. I can bargain hunt on the internet and come up w replacements for around $150. The real booger is sticks. In a week of shows I go through 5 pair at like 6-8 bucks each. It does add up.

Adam: We have a great rehearsal space. It’s actually the basement of my house. The original owner was a famous WWII gun and knife collector and he finished out the downstairs with pine paneling, acoustic tile ceilings and old school checkerboard tile. There is a fake fireplace with logs that are lit with a lightbulb and everything. It’s a wild time capsule and it sounds amazing for band rehearsal. There has definitely been a New Years Eve party or three that have gotten out of hand down there. It really is one of my favorite places in the world.

Blake: The last 11 years or so we have used Adam’s basement as a rehearsal space. Before that we rented a room in downtown Birmingham. Real cheap. It was just a room with a toilet down the hall. We had all kinds of bands practicing in there. We used to get drunk and ride the couch cushions down the stairs. Lots of fuzzy memories from those days.

Adam: The first song I remember writing was called “Tell Me Why”. The lyrics were “Please tell me why, why won’t you tell me why.” It was for my first band called Inner Stepchild. Those might have been the only lyrics in the whole song. It wasn’t great but we played it super fast and loud. We must have been about twelve or so at the time.

Blake: I honestly can’t remember, but I did have a song long ago that said “you belong in my three ring circus baby”

Adam: My first gig was with Inner Stepchild. We got together with a few other bands and rented a place called the Clay Community Center outside of Birmingham. I believe all of the bands were from different schools around the area. We passed out flyers and two hundred kids showed up. Admission was one dollar. I remember thinking we should have charged more to get in. The place went absolutely nuts. It was an absolute blast.

Blake: My first band was with Dan Sartain, and we were like 13 years old. Chemical. The first show was a house party in Dan’s basement. There were only 3 people who showed up, 2 of them were cute girls from school. We played our songs for them, and it was awful. Good times. It made me want to play a good show really badly.

Adam: Blake and I both work in a drapery workroom. We make super expensive draperies for the one percent. It’s a family business so it’s my mom, grandmother and our aunt. It really is amazing to work with a family that you adore. I know that can be rare these days. They are also sympathetic to our tour schedules. It’s a great job. We are very lucky in that regard.

Blake: I work in a family sewing shop that makes custom draperies. It’s not bad work, we can take time off for touring and such. My favorite day job was Yankee Pizza. Everyone who worked there was a fuck up. We’d drink beers and get stoned all day, make a few pizzas. Very little responsibility for anyone around there. I miss those days often.

Adam: Over the years I suppose the money has slowly gotten better. Income from touring is close to even with our day jobs. As far as what the future holds anyone’s guess is as good as mine. It would be cool to retire someday I suppose.

Blake: Williamson Brothers is new, and with COVID there have been little opportunity for making money. For the last decade I’ve been drumming for Lee Bains III and the Glory Fires. We make enough to keep the van running, and pay ourselves enough to pay the phone bill. Day jobs are most certainly needed. I think as things open back up, and shows get going again, it’s gonna be tough for a while to get good gigs with good money.

Adam: I would say focus on the things that you can control. Play as hard as you can regardless of the situation and treat people with respect. It’s all a mindset really. You can’t control the venue, the amount of folks showing up, or even the weather. I’ve seen way too many people let all the wrong things affect them negatively. Avoid falling into those traps and just play like it’s you last show on earth. People will take notice and they will come back for more.

Blake: Learn piano. I wish every day I could play keys. I just got my first piano and have made a few songs already. I think it would have made lots of things much easier along the way.

Adam & Blake Williamson have been playing music together since they were kids. They play bass and drums and tour heavily as part of Lee Bains III & The Glory Fires. They played in local Birmingham bands Vesper and Black Willis.