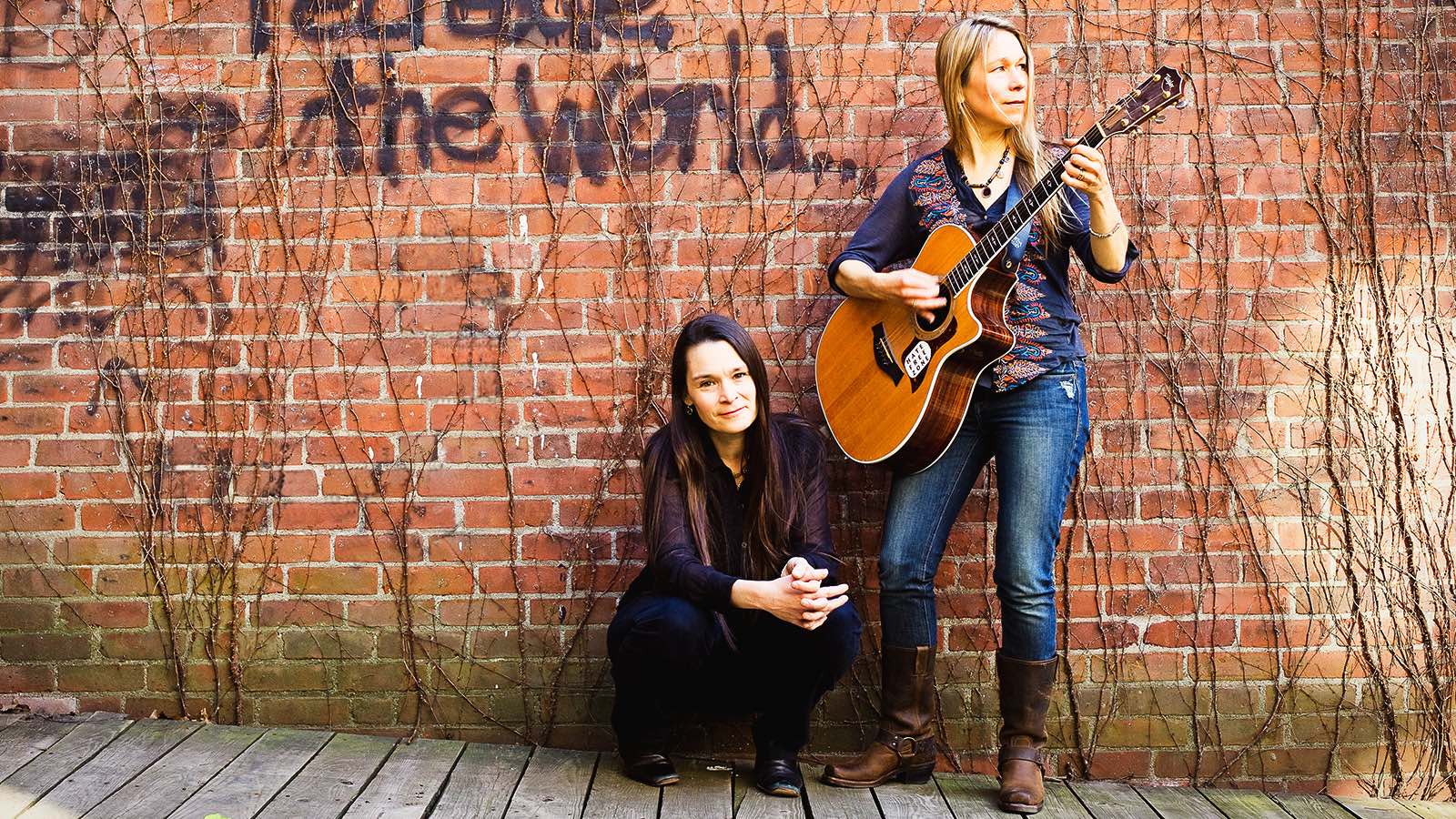 Nerissa Nields: We’ve had too many vehicles to count. Moby Juan Van Kanobe, Nessie the Loch Ness Vanster. Mama’s Purple Tar, Bessie Van Go. The constant is that Katryna is a much better driver. I am a better navigator. We have a good system when we don’t mess with that equation.

Katryna Neilds: When we started touring we were in two vehicles because we did not own a big enough ride — Isuzu Trooper and Subaru wagon. Then we graduated to a 15 passenger Dodge Ram Van with attached trailer (the vehicle of the rock band.)

First, Moby Wan Van Kenobe with Kitty Box, and then after MANY breakdowns and transmission replacements, we had a GoFundMe before GoFundMe’s. We planned a music festival with silent auctions, raffles, face painting stations, and other fundraising items like Nerissa knitting you a sweater, me painting you a picture of your favorite Nields song, or the entire band coming to your house and fixing a five course meal for you and your closest friends. We called it Jam For The Van and we raised enough money to buy a new 15 passenger Dodge Ram van with attached trailer, this time, named Nessie the Loch Ness Vanster and Astro, the trailer.

When the Nields band disbanded, we downsized to a Dodge Grand Caravan minivan called Mama’s Purple Tar- named by the first of our children. Now we travel primarily in my Subaru Impreza and occasionally in Nerissa’s electric Honda, if we don’t have too far to go. We may not be as good at naming our vehicles now, but we do get much better gas mileage.

Nerissa: I bring my own food wherever I go. We stop at Starbucks a lot.

Katryna: Nerissa always brings her own food and I eat whatever the venue provides. Keeping a stock of Kind bars and fresh fruit in the car helps too. Also, chocolate. I never travel without a stash of chocolate.

Nerissa: I am lazy about changing strings. I have a reminder on my iPhone to change strings once a month, but I usually ignore it, and then the G string breaks in the middle of a show, and Katryna has to punt while I change that one string. On the list of things we will do when we become rich and famous, I would put “Hire a person to take care of my guitars.”

Nerissa: We take turns rehearsing in our living rooms, mostly, where we have access to a piano to fine tune new harmonies. When we rehearse as a band, we do so in Dave Chalfant’s studio (which is in Katryna’s house. He is her husband!)

Katryna: Being acoustic, we can really rehearse anywhere. We often rehearse in the CAR on the way to the gig if we are learning a new song and wanting to make sure we’ve nailed down the harmonies. We rehearse in dressing rooms, living rooms, around campfires, in our kitchens… but when we arrange songs, when we are learning them for the first time, we tend to do that either in our living rooms where there is a piano and few distractions or at our studio. The studio is where we recorded November. It was originally a mother-in-law apartment with a bedroom, bathroom, laundry room, and sewing room. We turned it into a big drum room, a vocal booth, a guitar amp booth, and a console/mixing room. There are windows on almost every wall and it feels like Laurel Canyon in the late seventies- or as close as you can get to that while still being in chilly New England.

Nerissa: My first song, which I wrote at age 13: “Don’t say goodbye yet/Because we might someday need a friend/Forever is too long a word, babe/And I might just need a friend.”

Nerissa: Hmmm….depends if you count a paid gig or unpaid. Our first gig as “The Nields” was on June 7 1991, at Trinity College. Katryna had just graduated, and we were hired to sing a show for the alums, I think. We grabbed Katryna’s friend Mary McCormick to join us on “Black Boys on Mopeds.” Mary went on to be a super successful actress. But I remember that gig as being really fun and also lucrative. I think we used those earnings to buy popcorn and ramen noodles, our food for the next month!

Katryna: Yeah, our first paid gig was for Trinity College reunion weekend right after I graduated. My friend and fellow graduate, Mary McCormack, who is now a successful actor, but who ALWAYS has had one of my favorite singing voices, joined us. We sang some Nields songs and a bunch of covers by Sinead O’Connor, 10,000 Maniacs, Indigo Girls, Suzanne Vega- all the greats of the late 80’s early 90’s. I think we got paid $75 which was a huge pile of cash for us to split between us.

Nerissa: My favorite day job is the one I have now! I run writing workshops and retreats out of my studio in our backyard, and I also run three youth choruses, one for little kids, one for medium kids and one for teens. In all three choruses, we sing socially conscious/political/hopeful music from the folk and rock traditions. Our mission is to bring joy and hope to our community.

Katryna: My favorite day jobs are also my current ones. I get to teach music in three different places to kids age 0-18. I love how each age group challenges me to find music that will excite them and listening to all of their voices is never boring. There is nothing I enjoyed more as a child than singing. Whether it was at school, camp, or sitting around our kitchen. I basked in the joy that music brought me. It is an honor to get to try to provide that for the next generation.

Nerissa: See above—we’ve both figured out a way to parlay our music careers into making a living in our beloved (adopted) hometown of Northampton, MA, to be mothers present for our children as they go through the school system. So my income has increased. Though CD sales are nothing compared to what they once were. I expect when the youngest of our four children leaves for college (in 2026?!?!?) we might hit the road a bit harder than we have over the course of the past 18 years. I hope we keep making an album every year and a half or so.

Katryna: Our income used to come probably 50%-50% CD/merch sales and touring. Now very little comes from actually selling music. As we said above, we also both teach. When I was in my twenties, I think I would have been disappointed to think that I wasn’t making my income primarily from touring and selling CDs, but the truth is, what I am now doing is closer to what I wanted when I was a teenager. I imagined making a difference in the world. I assumed that would be by running for office or being a Supreme Court Justice. As an artist, you have a really unique opportunity to influence your community. If we were still touring 330 days a year, we would never get this chance to be part of our neighborhood.

Every year my kids were in elementary school, I volunteered my time teaching music to all the kids at the school. We had yearly Beatles sing-alongs in June, May Day celebrations in May, and every January, I taught songs from and about the Civil Rights Movement. I couldn’t have done that if I’d been on the road. This isn’t so much about income, I guess, but about time. By having many streams of income, I have the time to use music to give back to my community.

I think Nerissa is right, we will likely tour a lot more once all our kids are grown, but I hope that we never stop getting asked to show up with our voices and our guitar when the community needs some music- whether it’s for a protest or a fundraiser or a school sing-along.

Nerissa: You don’t need to be young and beautiful to have a successful career.

Folk music fans are super loyal and knowledgeable and passionate.

Katryna: Be generous. Be generous with your time, with the art you create, with your appreciation for others’ art. It will probably help you professionally, but more than that, it will make you happier along the way. Back in the day, I wish we had given our CDs away more frequently. Now, it’s more about giving away my time and attention. I am always richly rewarded for that kind of generosity.

The Nields have been lighting up the indie circuit since 1991, originally traveling the continent as a five-piece band. Today, Nerissa and Katryna perform as a duo, with about five or six full-band shows a year. With 20 albums, major and independent record and publishing deals, performances with 10,000 Maniacs, The Band, James Taylor, and the Indigo Girls, the Nields have lived the Rock & Roll life. The Nields have been lauded for their gorgeous, lilting, sibling harmonies, their wise, classic, folk/pop songs, their hilarious banter on stage, and their generosity and warmth in performance and engagement with their fans.

November, their latest album, was released on 31 January. Connect with them online and on the road.