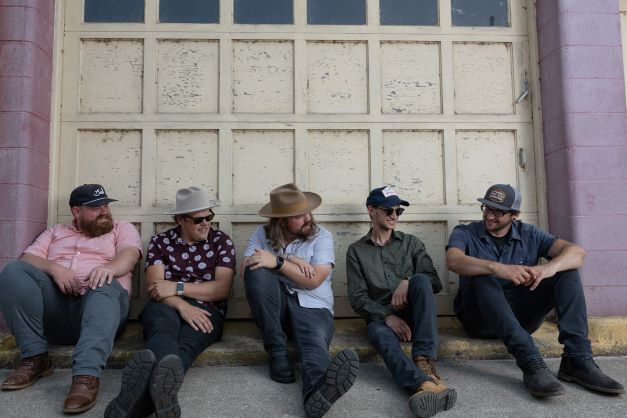 We are downright blessed to have a Ford Transit these days, through the generosity of a community member. We got help from them, having heard of our numerous breakdowns in Clifford (our ruby red 15 passenger Dodge modified for a touring bike team). We had broken down in Idaho, Nebraska, Iowa, and more, which for a Wisconsin band, was certainly not ideal. But gone are the days of no AC, in our boxers treks to shows. We’re thankful to have what we have now.

Tortillas are the lifeblood of this band. The ability to contain just about anything we put in them makes tortillas ideal for on the road snacks, and believe me, we put ANYTHING in them. We have learned to never turn down a meal, and to grab everything from the green room we can. We have cheap covered. Eating healthily is an entirely different story.

This used to be a bigger problem with our lesser equipment, when we would regularly break 5-6 strings a night leading to hundreds over the year. I remember having to carry a box of 25 sets of strings with me on stage just in case. But since we’ve gotten better equipment and adjustments, I personally go through about 14-15 sets a year, costing about $200.

Our rehearsal space is part of this incredible studio called Artisan Forge here in Eau Claire, WI. We share the space with metal workers, painters, chocolatiers, and luthiers. It makes for an interesting spot to write and rehearse. The craziest experience we had in that space was when we were raising money for our Kickstarter, and held a hot wing eating contest. I sincerely doubt that space had ever had so many grown men crying in the same small space. But hey! It funded this record. We can’t complain.

The first song we ever wrote as Them Coulee Boys is called “Big Slough” named after the road I grew up on in the country in the Coulee region of Wisconsin. One lyric that isn’t cringe inducing these days is:

Our first gig was booked by my dad, Bryan, at the ski hill where he was a ski instructor. We tucked ourselves back into a corner of the chalet and the three of us sat down on chairs and played acoustically. We played 2 original songs, paired with some Merle Haggard, CCR, and about 7 or 8 Avett brothers tunes. If I recall correctly, they let us use the tube hill as payment afterward. All in all, a pretty fruitful evening.

Currently we are all holding other jobs outside of music, be it teachers, day care providers, maintenance men, or store managers. The reality of being a touring musician is that unless you’re at the top, you have to do something else.

Our favorite day job for 3 of us probably would be the 4-5 summers we spent as camp counselors at a Bible camp in northern Wisconsin. That’s where Beau and I first became friends, where Beau met his wife, and where we started the band that became Them Coulee Boys. We would play in front of middle schoolers 4 times a day, 6 days a week, for 10 weeks a summer. I mean it when I say we cut our teeth as a band trying to keep 13 year olds entertained.

We went from playing 4 hour shows for $100 to now employing 5 band members, a manager, an agent, PR, and advertising people. It’s still not enough to make a living on, but it’s really incredible to look at now compared to then. We expect (or at least hope) that we see continued growth so we can make music our full time pursuit and support the people we love.

I wish I had known how important it is to take care of your health, both physically and emotionally. It’s easy to think “I love creating and performing music, why would I ever get sick of that?”. I know now that you can still love something and have it hurt you. Once I started taking care of myself, we became a better band, I became a better musician, and I became a better person.

Them Coulee Boys craft a brand of Americana that blends folk, punk, bluegrass, and rock & roll. They sing their conversational songs in 4 part harmony, often with a banjo stomp and rhythm section punch that drives the audience onto the dance floor and into community. Their trusty van has propelled them thousands of miles across the country and into the hearts of strangers, who tend to leave each show as family. It’s music that creates community through the shared experience of joy and giving a shit.

The story is true. Soren Staff and Beau Janke met as counselors at a bible camp in northern Wisconsin in 2011. Having both grown up amidst a stretch of glacial melt-carved river valleys in the upper Midwest (called coulees by French fur trappers), they were fast friends. At camp, another counselor took to teasing them saying “them coulee boys are at it again.” The name stuck. Spending their weeks playing songs with kids around a campfire led to weekends figuring out an Avett Brothers tune or classic country song. In 2013, they added Soren’s brother Jens on mandolin, and a rough-around-the-edges, stomping 3-piece folk band played their first show as Them Coulee Boys. Four years later Neil Krause joined to play acoustic and electric bass, and in 2019 when Stas Hable joined on drums, TCB evolved into the full-on americana rock band they are today. The live band straddles the line between pure and genuine ballads and a sweaty, leaping take on countrified rock-n-roll.

With three full length albums and an EP behind them, including 2019’s Die Happy (produced by Trampled By Turtles’ Dave Simonett on Lo-Hi Records), the band has garnered international attention and earned press in American Songwriter and The Bluegrass Situation, as well as tours with TBT and a spot on the songwriter’s Cayamo Cruise. In 2020, they were named Milwaukee Journal Sentinel’s Band to Watch, and were nominated for band of the year by the Wisconsin Area Music Industry. When the world stopped in early 2020, the band holed up in their practice space and began writing, and the result is their brand new effort entitled Namesake.

Namesake is Them Coulee Boys following a new trajectory, combining their take on a punched up version of folk-grass/americana with a comfort in electric instruments and rock & roll. The record lives and breathes, is both intimate and bombastic. It’s your sweet aunt who makes delicious pies and your wiley uncle not afraid to hit a bit of the hooch. At bottom is the acceptance that comes with family and old friends: none of us are perfect, but there’s enough love out there to make up for it.

Connect with Them Coulee Boys online and on the road.