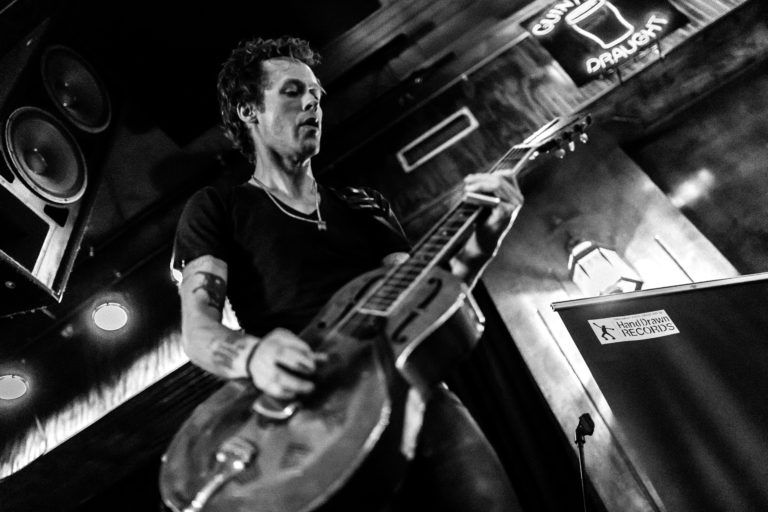 2007 Toyota Sienna Minivan — it’s the fourth van we’ve had, and second Toyota Sienna — I would recommend it to any touring band if you travel light and don’t have a horn section. Great gas mileage, will run forever, and reasonably invisible to thieves.

I can’t ever recall the van breaking down actually. One time, somewhere in Indiana, a semi-truck directly in front of us on the highway had a blowout and the tire tread smashed into the windshield at 70 mph. Glass went everywhere. I couldn’t see through the windshield, but somehow I slowed down and made my way from the fast lane to the nearest exit and we pulled over. We couldn’t get it fixed immediately, and we had a gig, so Jeremy drove the next four hours to Cincinnati with his head hanging out the window like Ace Ventura. The show must go on, as they say…

In my experience, there’s cheap and there’s healthy, and never the twain shall meet. But there are loopholes…we try and stock up on ready to eat fruit, bananas especially, and nuts and stuff like that at the grocery store. Never pass up a chance to eat a salad. I drink tons of water. And peanut butter. A lot of peanut butter. You’d be surprised how long you can survive and thrive on this diet. Also, in New York, a slice of cheese pizza is like $2.50, and even one topping will cost as much as a dollar extra or more. I just get cheese pizza; those toppings don’t fundamentally alter the essence of what a slice of pizza is.

I use extremely heavy gauge strings, about .016-.060, so they hardly ever break. I change them when they sound dull, but I’m also lazy about it on the road — I probably change them once every 2 months on the road, and I should probably do it every 2 weeks. Strings are about $10 a pack I think? I can’t ever remember how much they cost. I can remember that it takes time to change them, and changing strings is quite possibly my least favorite thing about being a guitar player.

The Sideshow Tragedy has never had a fixed rehearsal space for very long…I guess the longest one was an extra room at Jeremy’s old house, which doubled as his office, guest bedroom, and bicycle storage. So there was a bicycle hanging from the ceiling, a futon, and a desk, in addition to drums and cases and amps everywhere. It was beautiful. We made some good demos in that room. I used to work at a music venue in Austin called Momo’s, and we would rehearse there on the stage, in the daytime before it opened. That was a good one too.

Hmmm…I’ve been making up songs since I was like 5? I’ll take this question to mean the first song I played in a band: it was called “Why.” Sample lyric: “Drifting on a sea of despair/the flame of misery has been lit.” I was 12. Not sure I knew what I was talking about.

My first gig was at a church talent show. I wore a satin shirt (a la Keith Richards on the 72 STP tour) and bell bottoms that I found in my grandparents’ attic. I was 12, and kind of a quiet, bookish kid, real shy. Invisible. Suddenly, after that gig–for a few hours anyway–girls wanted to talk to me. I wasn’t a compelling performer, I couldn’t sing and I was an even worse guitar player, but after that talent show I decided I’d keep practicing.

I’ve worked in bars and music venues on and off for about 12 years now — I think my longest stretch of having no job other than music was about 3 years. But I find that work to be ideal for a touring musician, as you can basically just do it whenever you want to or need to.

There’s been a general curve upwards over the years, which has obviously flatlined in the past year due to the pandemic — Our principal source of income was performing, and that hasn’t been much of an option as of late…as for 5-10 years for now, who knows? I’m taking everything 5 to 10 days at a time right now…

Even if it seems like a good idea, do not compromise AT ALL to get money or popularity or whatever. Getting money and fame is a longshot, and after you’re dead no one will care anyway. All that will be left are the records you made. So make music exactly like you want it to sound. Nothing else matters. This seems obvious, and it’s a cliche at this point, but everyone will try to change you, and sometimes you’ll listen to them because you think “why not? maybe it will work.” Try to resist.

Singleton grew up playing in blues clubs in East Texas as a teenager, where his dad was (and is) an acoustic blues fanatic and collector of vintage National resonator guitars. Nathan devoured old blues music, while at the same time, gravitated toward listening to rock, punk rock, funk, new wave, and legendary songwriters and musicians too numerous to mention.

Named after references in a Rimbaud poem called “Parade”, The Sideshow Tragedy has been captivating audiences with their “unadulterated energy” (KUT) and “distinctive, dark, and ultimately uplifting” (Austin Chronicle) tunes across Texas and much of the U.S. for over a decade, sharing the stage with the likes of Cheap Trick, Joan Jett, Black Joe Lewis, Bob Log III, King Khan and the Shrines, Conor Oberst, Joseph Arthur, Leon Russell, Foghat and Afghan Whigs. They’ve earned raves for their past albums and comparisons to artists as fierce and powerful as Led Zeppelin, Nirvana, Chris Whitley, Bob Dylan or The Waterboys, among others.

After the Fall, the group’s latest album, was released in October. Connect with the band online and (eventually) on the road.