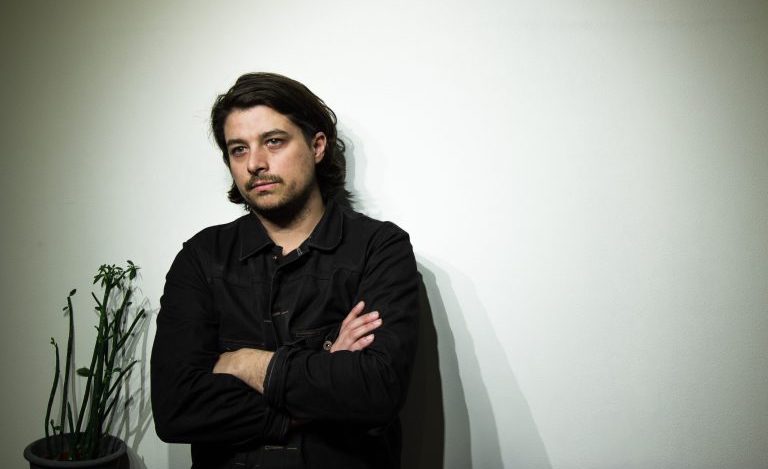 2007 Ford Econoline e150. There’s a new-ish engine with about 270k miles on the vehicle altogether. “Manny the Van,” has seen better days but he’s hanging in there! *Knock on wood* I had a trailer catch on fire outside of El Paso, TX and we put it out with a bunch of Red Bull. The tow company was called Camel.

Also, one time our driveshaft broke in Sayre, Oklahoma. We were stuck there for five days with nothing to do, that was some years back. Funny enough, my future wife was with us. She was dating my guitar player at the time.

Let’s just say my plate gets a little lighter between the Whole Foods buffet and the cash register. Also, they have a lovely sample section of sprays and lotions. The Hobo day spa tip came from Kelsey, from Sir Woman.

Not sure… but I always have a back-up guitars and strings. I buy all my string at South Austin Music, they have quality strings for a good price.

Most notably, the Delta Spirit rehearsal space we had in Greenpoint, Brooklyn was flooded by Hurricane Sandy. It was pretty sad. We lost about $20,000 worth of gear. Ultimately, it was just stuff. Some folks lost a lot more than that during Sandy.

Man I have no idea. I was 10 years old when I started writing songs. I definitely went through my share of phases. Nirvana, to new metal, to hard core, to Christian, to Dylan and Waits. It took me a long time and a lot of bad songs before I feel like I started writing the good ones.

It was at the Galaxy Theater (now The Observatory) in Santa Ana, California. It was a pay to play first of four on the bill. I was 17 maybe 18 years old.

I worked with special needs students after I graduated high school. I did that for a couple of years. By the time I was 22, I was able to get my hustle going enough to become a full-time musician. This is the only thing I’ve really wanted since I pick up a guitar at age 7.

Financially, it has remained pretty steady (*knock on wood again*). It takes being on the ball and keeping yourself busy a year ahead of time, but it can be done. 5-10 years from now we’ll see… I can only plan a couple years ahead. I hope to write better songs, play some really fun shows, and produce a couple talented people along the way.

I wouldn’t tell the younger me a thing. Even if I met my past self, he wouldn’t have listened to me anyway. I’ve had an amazing career and life, I’ve got nothing to complain about over here 🙂

Best-known as the co-founder and frontman for shape-shifting heartland indie rockers Delta Spirit, Matthew Logan Vasquez’s fiery delivery and thought-provoking lyrics draw from a huge and versatile well of influences, including Gram Parsons, Kurt Cobain, Neil Young, and Iggy Pop. As a solo artist, he juggles elements of indie rock, electronic pop, R&B, and soulful Americana, flirting with despondency, but ultimately succumbing to beatitude, especially on 2017’s home recorded, yet vibrant sophomore effort, Does What He Wants.

After releasing Delta Spirit’s critically acclaimed fourth studio album, Into the Wide, in 2014, Vasquez moved with his wife and newborn son to Austin, Texas and began working on what would become his debut solo outing. The resulting Austin EP, which finds Vasquez manning every instrument and offering up a blistering set of outlaw psych rock, arrived in 2015, with plans to issue his debut long-player, Solicitor Returns, in early 2016. In January 2017, Vasquez issued “Same,” the driving single from his sophomore solo outing Does What He Wants, which arrived later that April. The following year saw Vasquez release the EP Texas Murder Ballads.

Light’n Up, his latest album, was released in February. Connect with Vasquez online and on the road.