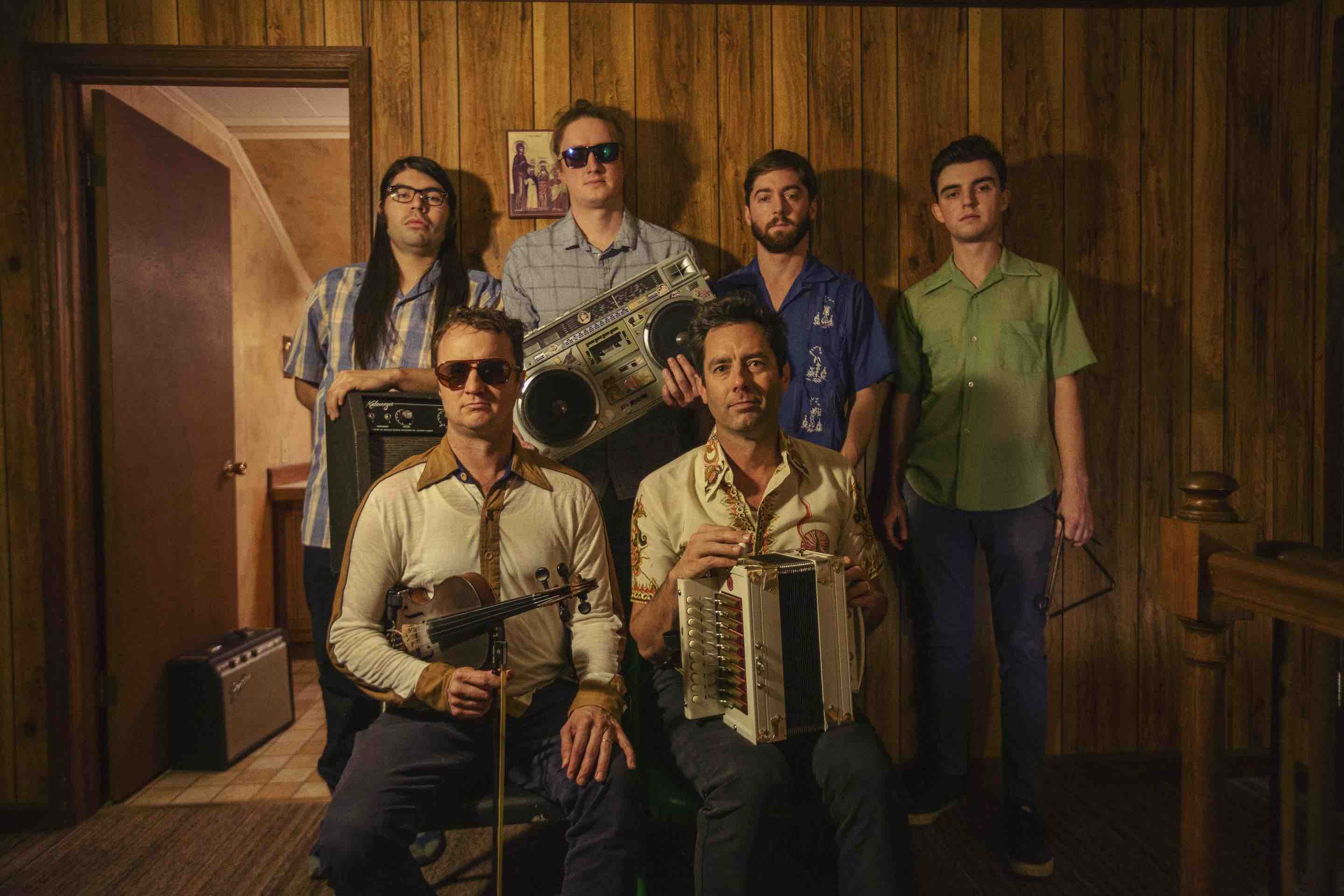 Andre Michot: It’s a 2006 Chevy Van with about 350,000 miles on it and almost as many dents! The paint regularly peels off in spots so every few months we roll some new paint on it.

A year or so back, Louis and I were driving back to Lafayette after a gig in New Orleans. Around 3:30AM, just outside Baton Rouge, we blew a tire, pulled over on the shoulder of I-10 to change it and realized that the jack was too tall to fit under the van when it’s resting on the tire rim. We looked around and found an old pallet floating in a ditch, pulled it apart and made a ramp to drive the van onto. After a few tries we finally got the van up the ramp and the jack under that.

Next, we just had to lower the spare tire down from under the van and put it on like we’ve done more than a few times in the past — easy…except that the cable that holds the tire up was rusted tight, After 20-30 minutes of trying to un-stick it, we ended up taking turns, one holding the flash light, the other beating the metal attached to the rusted cable with the tire iron enough so the spare could would come off; all this lying on our backs on the shoulder of I-10 kinda wet from getting the pallet out of the ditch.

After that it was smooth sailing and we made it home about sunrise, just in time to shower and go to Louis’ son Julien’s Confirmation mass.

Funny thing is I was telling the story to a friend and his response was “…and that was after y’all won the Grammy?”!!

Andre: We work pretty hard when we’re not playing with LBR and touring is hard work in itself; so we take that opportunity enjoy ourselves and eat whatever we want and taste whatever food and libations are available. It definitely makes touring more tolerable.

Louis Michot: Probably about one or two fiddle strings per gig. I probably go through about 25 packs of fiddle strings a year. Luckily I’m sponsored by Red Label Strings, so what would cost about $600 a year costs a good bit less!

Andre: Well, accordions have metal reeds, about 100 in a Cajun accordion. It’s rare that I break one, but then again it takes about four hours to tune an accordion up when it’s time…I’d call that breaking even.

Andre: Rehearsal!? Only if absolutely necessary…and if so it’s usually at one of the LBR’s houses

Andre: Our first gig was in the Summer of 1999 at Cafe Rue Vermilion in downtown Lafayette. Louis and I had been playing accordion and fiddle without the other knowing (he was living in Canada) and decided to try out a gig; we’d each been playing less than a year.

Louis booked the place and I printed copies of an Iry Lejeune photo on my printer and put them up around town. I think it just said Cajun Music and the date and time of the show. Along with the original LBRs -Oscar Courville, Nonc Dav and Matt Doucet – other friends and family joined us on clarinet, rub board, triangles etc… We ended up leading the crowd out the Cafe’s doors and around downtown, playing the Mardi Gras song like we learned growing up playing with our dad and uncles’ band, Les Freres Michot. Louis got it all on record too!

Andre: I’ve done carpentry and built and repaired Cajun accordions for the last 15 and 12 years. It’s important to have your own schedule if you’re a musician. My job before that was as a bookkeeper/property manager/mechanic/fishing partner and a few other things for my grandfather.

Andre: It’s looking better each year (a long way from coming home with $200 after 10 days in NYC) and I wouldn’t mind if that trend continued!

Andre: That it’s the personality, outlook and musicianship of the musician that matters more than what chops they have. It is to me and Louis too. You spend a lot of time together and if you’re having a good time playing with someone that you can enjoy hanging out and having a drink with, that comes across in the music more than if you’re playing 10,000 perfectly timed notes while wearing a cool scarf in a steamy club while blowing people’s eardrums out… but then again some people like all that fine too and good for them.

The Grammy award winning Lost Bayou Ramblers’ evolution as a perversely progressive band rooted in Cajun traditions continues to excite, challenge, and redefine both genre expectations as well as cultural preconceptions. Founded in 1999 by brothers Andre and Louis Michot, the last 5 years have brought LBR a feature on Jack White’s American Epic, score contributions to the Oscar nominated film Beasts of the Southern Wild, a Grammy award for their latest album Kalenda and tours with both Arcade Fire and the Violent Femmes. Lost Bayou Ramblers stand at the crosscurrents of Louisiana culture by inhabiting the gray area between Cajun and Creole, convention and innovation, mystery and a revelation, experimenting and growing the show to what it’s become today: an eclectic mix of modern sounds and rhythms with ancient Cajun melodies and lyrics. World Café says “The Grammy-winning group plays a revved-up version of Cajun music, shot through with punk energy and psychedelic fuzz.”

The group recently released Asteur, a live album recorded at various venues in New Orleans. Connect with them online and on the road.