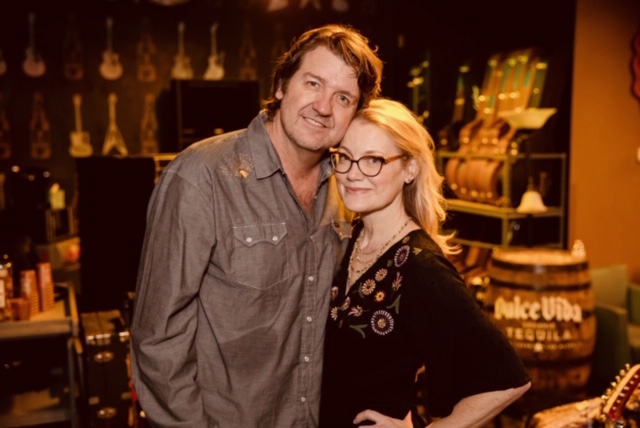 Kelly Willis: We have a Sprinter Van that has been outfitted with a bathroom and kitchenette.

We’ve had many things fall off or get knocked off. Someone tried to drive it under a low tree. A little duct tape and we’re back in business. But if it’s raining you definitely don’t want the captains chair behind the driver.

Willis: I am NOT the health nut in the group but… I try to eat salads as much as possible because they offset all the milk duds.

Willis: Good question for Bruce since I change my strings every 4 months whether I need to or not.

Bruce Robison: One time me and Kelly didn’t get into a fight and the music sounded good. It was crazy!

Robison: I remember a song called “Hurricane Mary” and it was a play on a female hurricane name that was crashing through town. It was horrible, I try to forget about it.

Robison: First gig. That was at my seventh grade spring fling with my garage band called High Voltage and it was a huge success! They put our picture in the paper. The set list had ZZ Top, Merle Haggard, Grand Funk Railroad

Willis: My last day job was working for a cult/b-movie rental in Alexandria,VA called The Video Vault. It was my favorite job because of the co-workers and the crazy films.

Robison: That’s a good question. Making more money off the road now than I did 5 years ago, but I have high hopes for my new music label, The Next Waltz, and really hoping that I can be chasing tour the way I want to.

Willis: It’s a lot more fun being in a band/duo than being a solo act. Stress cut in half, laughs doubled.

Bruce Robison and Kelly Willis are each renowned for crafting some of the most enduring music on the vast country and Americana landscape. But when this Texas couple combines their talents, something especially powerful happens. Like a chemical reaction, their musical fusion generates a special form of energy, and for only the fourth time in their history, they’re unleashing it in recorded form. Beautiful Lie arrived on the summer solstice, June 21, 2019, on Robison’s The Next Waltz label.

For Robison, it’s always about the song. He’s written plenty of great ones — and ridden several to the upper reaches of Billboard’s country charts. (Tim McGraw and the Dixie Chicks hit No. 1 with “Angry All the Time” and “Travelin’ Soldier,” respectively; George Strait reached No. 2 with “Wrapped” and No. 6 with “Desperately.”)