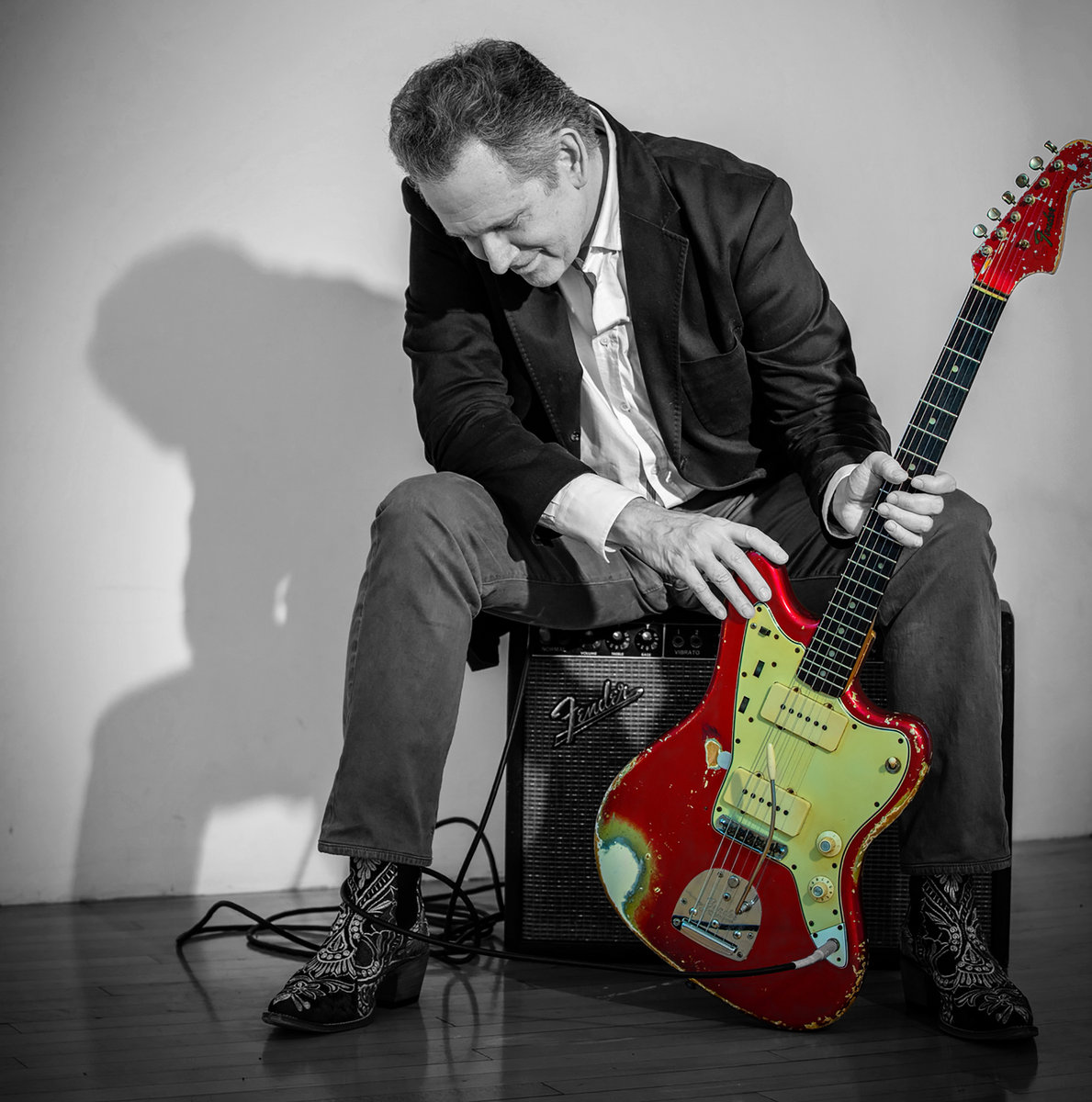 My current vehicle for solo shows is a 2019 grey Honda Accord with light road wear (11,000 miles), scraped in all the right places and souped up with a portable CD boom box and an orthopedic pillow.

I have a fond memory from years past of breaking down/waking up at a goat farm. It was quite pleasant and pastoral.

Through the kindness of friends and friendly strangers.

I have a pretty light touch, so I don’t break many. I usually change strings every 3 months or so; a set of strings is around $6 a pop. Is it gross self-promotion to say that it would be cool to have a string endorsement?

My current rehearsal space is at home, a 9’ x 10’ room that doubles as an office. There’s a computer on a desk, a Vox AC4C1 amp on the floor, and some pictures on the walls for inspiration (Dan Hicks, Johnny Mercer, Otis Clay).

My wildest rehearsal-space experience was in a room in downtown New York rented by my first band, The Individuals. The water pipes in the building broke, and we had to go down there and remove the equipment. It was like The Poseidon Adventure; I used my Fender Super Reverb as a raft.

I wrote my first song when I was around 7 years old. I sung the melody while I beat on a box of Kleenex tissues with a pair of chopsticks. I don’t believe the song had a title, but the chorus was: “Is your phone / ringing right now? / It could be an important person / or it could be Elsie the Cow.” Elsie the Cow was, of course, very important — she was the face of Borden milk. What is it about goats and cows? Maybe farming is my true calling.

My first professional gig was with The Individuals. I think it may have been at the much-loved Tier 3 in NYC. The show was probably sparsely attended, but I’m sure some musician friends (the dB’s, 8 Eyed Spy?) were there in support.

Currently, I’m fortunate to have a day gig working as a copywriter in the entertainment industry. My favorite day job was when I was 19, working for the extraordinary Alan Betrock, founder of the legendary paper, the NY Rocker. Alan hired me to help archive his collection of music magazines. My favorites were the old 16 magazines. Paul Revere and the Raiders! Dino, Desi & Billy!

My music-related income has been negligible over the past 5 to10 years. I don’t expect the release of my new album, Fabulous Twilight, to substantially change that (although I do urge your kind and discriminating readers to check it out). More than money, I hope the future brings greater opportunities to share my music and to collaborate with artists whom I admire.

I wish I had realized the immediate benefits of seeking out opportunities to play with more accomplished musicians — to play above your level. When you challenge yourself that way, you develop quicker and stay sharper. Oh, and did I mention the orthopedic pillow?

Klages’s own musical history began in the 1980s, when he was the lead guitarist for the acclaimed band the Individuals. Along with the Bongos and the dB’s, the Individuals led an influential new wave of N.Y.-based indie rock that influenced generations of bands to come.

After releasing two albums with the Individuals, Klages left to make his own well-received solo EP for Coyote Records, In a Dream, which featured the recording debut of Yo La Tengo’s Ira Kaplan and Georgia Hubley. Soon after, Jon realized a personal dream when he joined forces with one of his guitar heroes, Richard Lloyd, from the legendary band Television. For two years, Klages toured with Lloyd, and then, looking for a change of musical scene, moved to Los Angeles.

After laying down roots on the West Coast, Klages quickly established himself as an in-demand musician, performing/recording with such L.A. notables as ex-True West member Russ Tolman, Steve Wynn (the Dream Syndicate and the Baseball Project), and Stephen McCarthy (the Long Ryders), and having his songs appear on albums by artists including power-pop favorites 20/20 and on TV series such as Knots Landing.