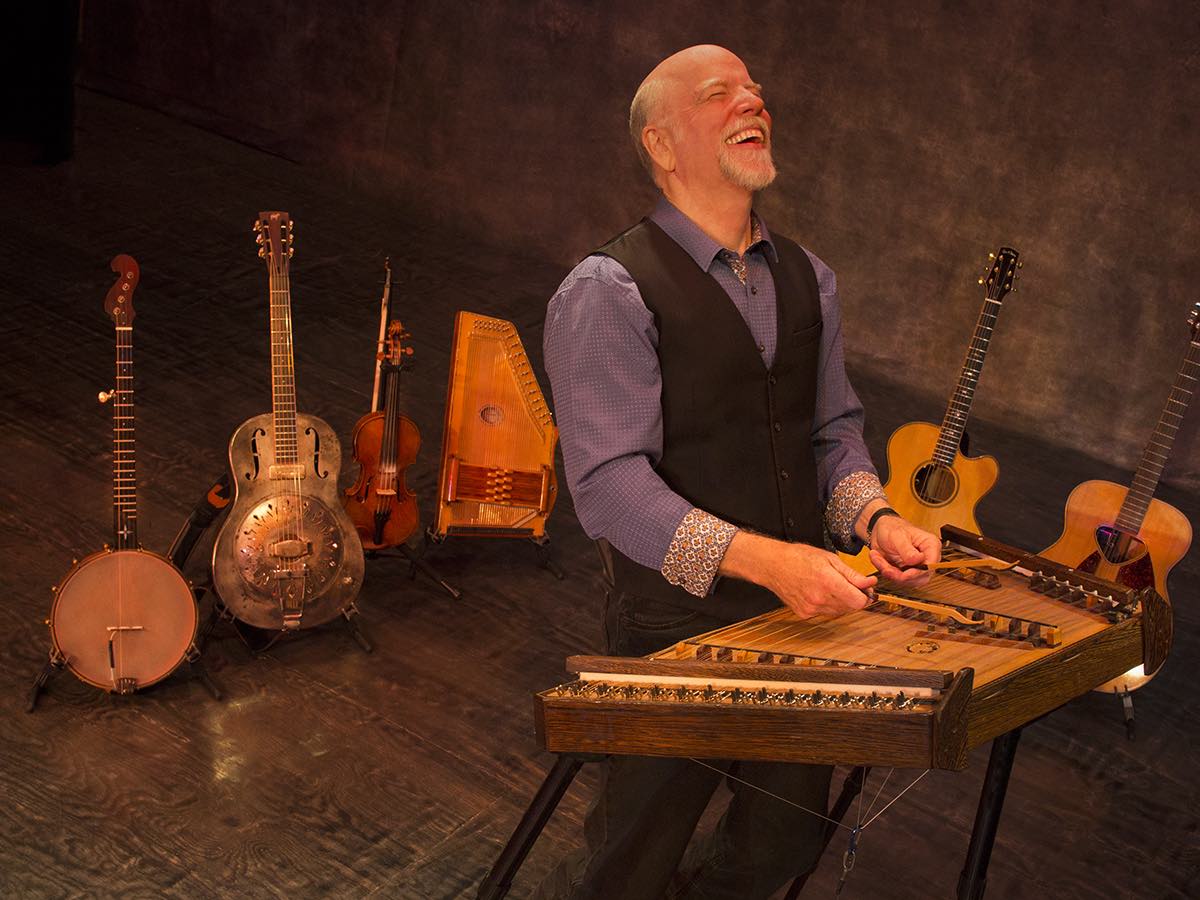 John Hartford once told me that his tour bus (a unusual luxury for a solo artist) cost him $400/day, whether it was on the road or sat in his driveway. That was probably 1980. That inoculated me from any dreams of touring by bus.

At a party in Charlottesville (where I lived for 20 years) one night, Dave Matthews told me he has to move 72 people to do his gigs.

The luxury of being a solo artist is that I don’t have to move any more than myself and a roadie to do dates. So my touring is normally confined to weekends. I fly into a central point to the gigs, meet up with my roadie (who lives in Rochester, NY), we rent a car (usually a large sedan, but sometimes a van), do the gigs and fly back home. Repeat the next booked weekend.

Finally, because I live in GA and my roadie in NY, I will sometimes do gigs around the southeast on my own and drive. Since about 2004 I’ve owned a string of Priuses. (Prii?) With the back seat folded down it carries a remarkable amount of gear. It’s plenty comfortable (outfitted with an upgraded stereo system and leather seats), has all the room I need and the mileage I love. My current Prius has about 120K on it. No major repairs or breakdowns. I’m lucky.

This has been one of the biggest changes in the 48 years I’ve been touring. There’s lots more healthy food available. Plus, I’ve learned to make time to eat before the gig because, afterwards, it’s pizza or convenience store crap. Or, if you’re touring in the UK, Indian, which I love. If you’re going to stay healthy on the road…and/or hope to have a long career…it takes planning and discipline.

I rarely break strings. I change guitar strings pretty frequently, banjo less often, everything else only as needed. Can’t remember the last time I broke a fiddle, hammer dulcimer, or autoharp string. Though I did break a string on a piano somewhere out in CA, I seem to remember. But I don’t think that was actually my fault.

I replace them at minimal cost. I’m an artist for D’Addario and they give me a pretty sweet deal.

In 2012 I bought the first house in my adult life that had either a garage or a basement. And, it turns out this place had a basement and 2 garages, as the original owner/builder was a car freak. I converted one of the garages into a studio space. It’s 2-story (a 2-story garage??), so my wife, who’s an author, has a space upstairs. In my space, I have a lot of my instruments out and around…on the walls, in stands, etc. which allows me to respond to the siren call of some too-long-neglected Cajun accordion or nyckelharpa or oud. I have a grand piano at the center of things, and basic recording equipment to capture the stray demo of a new song.

These days, I have a little video setup, as well, for live streaming concerts and the too-fucking-many Zoom meetings I have these days.

I started writing at 14, the same day I got my first guitar. I wrote lots of terrible songs. Still do, but now I have the sense to recognize their awful-ness and confine them to the dustbin of my writing archive, never to see the light of day in my lifetime.

The first song anyone took notice of (I won my high school talent show) was called “The Ponderosa No Cream in My Coffee Blues.” I wrote it in our local high school philosophers’ hangout the night our favorite waitress was working her final shift. She was fired for not kicking us reprobates out after ordering a single cup of coffee and hanging out all night. I seem to remember that the first verse was something like:

I’d been playing for about 2 weeks when a neighbor guy, Jerry, knocks on our door. He works…like almost every adult male I know…at a local paper mill and wants me to play for the union’s Labor Day picnic. Offers me $25. I thought, “I’ve been playing for 2 weeks and I’ve got my first gig! This music business is easy!” But I confess that I only know 3 songs. He says, fine that’ll do, because no one’s gonna be listening to me anyway, so just sing those three songs over and over. However, he tells me I have to absolutely sing this one song. “It’s to the Battle Hymn of the Republic!” he says. So, I figure, how hard can that be? But I found out it has a B7 chord in it…and I’m still struggling with F.

Anyway, I learn the song in question, my Mom presses my little polyester white short-sleeve shirt, I clip on a tie, and go to the picnic. Sure enough, not a soul is listening to me. Everyone is sitting around talking about football, drinking beer. Jerry gives me the high sign that it’s time to do that damn B7 song. So I start up, my cheat sheet of lyrics under a Coke can on the picnic table in front of me, “When the union’s inspiration through the worker’s blood shall run…” And something amazing starts to happen.

I remember wanting to figure out what made these men do this uncharacteristically non-male, but profoundly masculine thing. I guess I’ve spent the last 50+ years exploring that dynamic.

A memorable first gig, to be sure.

For one year I was hired to establish a traditional music program at a small southwest Virginia college. It was fun, intense, and exhausting. It was during that year that my performing career started to take off. I turned down a contract from the college to return the next year, figuring, “I’ll ride this performing pony for the five years it’s likely to last and then come back to teaching.” Been waiting ever since.

The biggest thing is the precipitous drop in CD sales. Happened about 2005. Sales just went off a cliff. Happened to everybody. The formula of touring changed immediately. No longer were you touring to promote album sales. There were almost no album sales. You were touring to pay your basic bills. Downloading, at least, provided some income. Streaming is larceny, plain and simple. No musician makes any significant money from streaming. This downturn has been offset a little by the fact that, despite what I expected, I’m attracting generally larger audiences than I used to. Maybe people figure they need to see me before I croak. Who knows?

5-10 years from now? Hell, I can’t predict, in this COVID-19 era, what my income is going to be 5 months from now. Or if there will be any. But like most musicians, I’m stumbling my way through this new reality. I’ve started a Patreon page. Do the odd livestream. I’ve got a little leg up in that I’ve been a lifetime union member (remember that first gig?) and am now collecting my union pension, which is a life saver. But, income-wise, that’s not really the metric I’m using at my age (67). I’ve got some financial wiggle room, so I have the luxury of simply trying to be useful for as long as I’m able.

That there is more than one model for success. I was lucky enough to start off in the backwater of the folk music revival (1972). There was no gold ring. So I got my joy from being able to play for audiences that paid attention, play music I loved, plus, I hit the street at the same time that public radio and the independent record industry were starting up, so I had a means and an access to an audience. Synchronicity.

But more to the above point, I was able to introduce my children to people and experiences around the world. I was able to be involved in things and participate in events that have changed me and, in some instances, changed the world. I was able to feed my family and send a son to college and have him graduate debt-free, thanks to my performances and my songs. I would have heroes who became comrades, who became friends. I’ve been able to feel as though I’ve created music that touched peoples’ lives and been useful and sometimes helpful to them. None of that was on my radar at age twenty. I’ve survived in the trade long enough to see that, though. If that isn’t “success” I don’t know what is.

In a career that has spanned nearly fifty years, McCutcheon has frequently been on the cutting edge of change in the folk music world. He is credited as one of the major forces in the revival of the hammer dulcimer. His 1983 album Howjadoo is widely cited as the beginning of the revolution in high-quality children’s music in the US. He helped found and, for a decade and a half, lead the first non-geographic local union, the American Federation of Musicians. His song “Christmas in the Trenches” was named one of the “100 Essential Folksongs” by Folk Alley. His work in both children’s books and a one-man play are further evidence of why the Washington Post dubbed him “folk music’s rustic renaissance man!”

The songs on Cabin Fever: Songs from the Quarantine, his latest release, were written over three weeks of self-quarantine after returning from an Australian tour in mid-March. Connect with McCutcheon online and on the road.