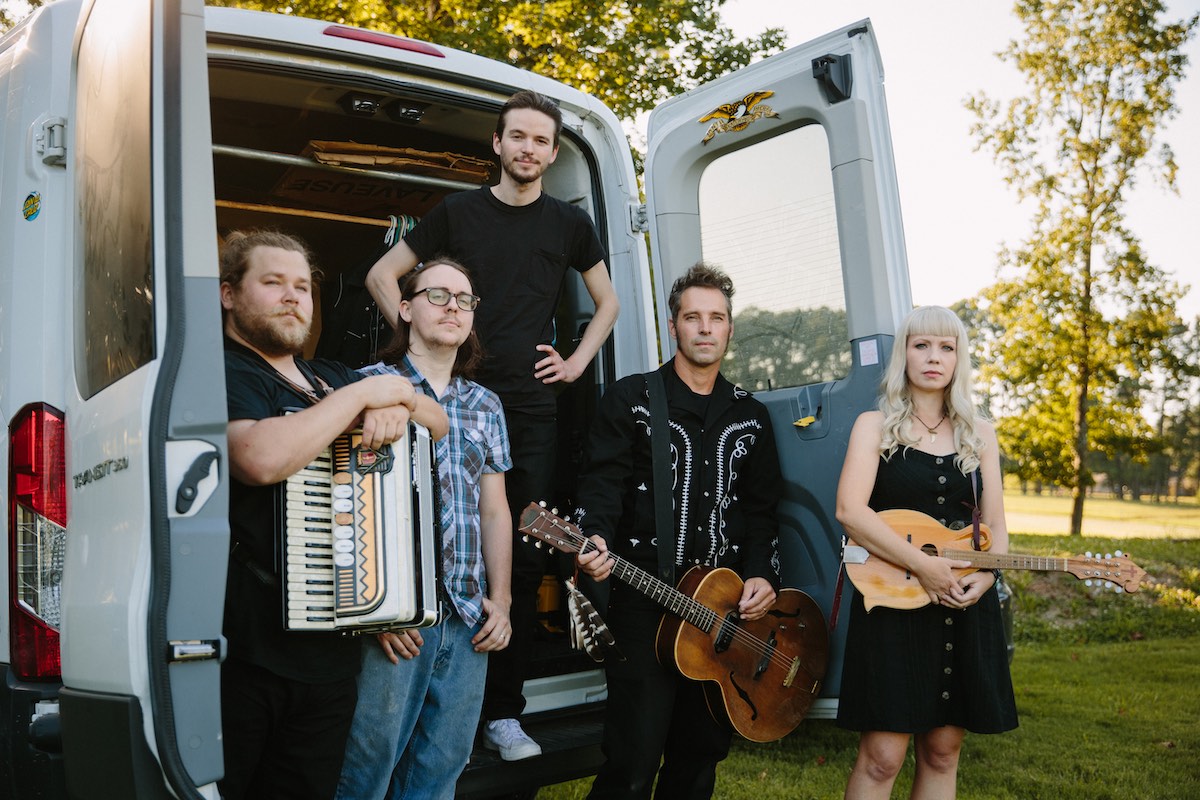 I would describe our tour vehicle as a comfortable, cozy, gas guzzling beast. It’s a 2016 Ford Transit.

The best way to eat healthy, the only way for us at the moment, is to get to each town a little early and cook out with pals/homies. We know enough folks in most places where we can just go to the kitchens of various friends and cook food.

I break little to none. Maybe a string a year. I enjoy playing old strings; I just have figured out how to make ‘em last longer I guess…

We have no rehearsal space…I guess our rehearsal space would be the stage! We play a lot of shows “off of the books”, like fish fries and that sort of thing, so we can usually learn out in the woods, or out in a field, making music while some event is going on.

Well, the first Haints song would be “What is a Haint”…I had written songs for bands years and years prior. “…what is a haint….please tell me great grand maw…well a haint ain’t nothin but distant kin..the ghost of an old Choctaw…”

We played a number of shows with no band name. The first official show, where we were on a flyer, was in Auburn, Alabama at a place called the Malformity House, with an incredible band named Milemarker.

I’ve been self employed for 20 years, as a screen printer (Black Owl Trading Company), and a record label owner (Arkam Records).

It’s so small…I’ve never made much at all playing music. But it was a big deal to go on tour, and finally start making money as opposed to losing money. So I guess it’s slowly increasing. But still waaaay below minimum wage for sure.

I sorta wish I had been a bit more serious about the dark terrible side of it all. Tried to fight a little harder. I truly believed it was a “us against the system” type of situation, and that the underground was gonna forever exist in its own way. Idealistic, foolishly romantic I guess. I could have tried harder to get “bigger” a long time ago, but I still just don’t care. I just love music. Period!!!

On the Pine Hill Haints’ latest long-player, The Song Companion of a Lonestar Cowboy, they go there and to other colorful places on the Americana and Appalachian trail. The fifteen song sequence kicks off with “Fall Asleep” and “Back to Alabama,” a fiery pair of rockabilly-meets-Irish-jig rave-ups, then winds through standout tracks like the Bo Diddley-grovved “Pretty Thing,” a pounding tom-tom and fiddle take on the traditional “John Henry” and the catchy, cajun-flavored squeezebox pop of “Lone Star Kid.” There are excursions into Sun Records-style country (“Midnight Mayor” and “Louise”) and swampy blues (the saw-singing “Wade in the Water” and “Downtown Blues,” which features guest J.D. Wilkes on harmonica).

Throughout, Barrier’s strong tenor voice rings familiar and friendly, with deep echoes of everything from John Lee Hooker to Buddy Holly to Johnny Cash. And the band plays with a sense of abandon that comes from thousands of gigs behind them. It all sounds deceptively simple, but anyone who plays music knows better.

Connect with Barrier and The Pine Hill Haints online and (eventually) on the road.