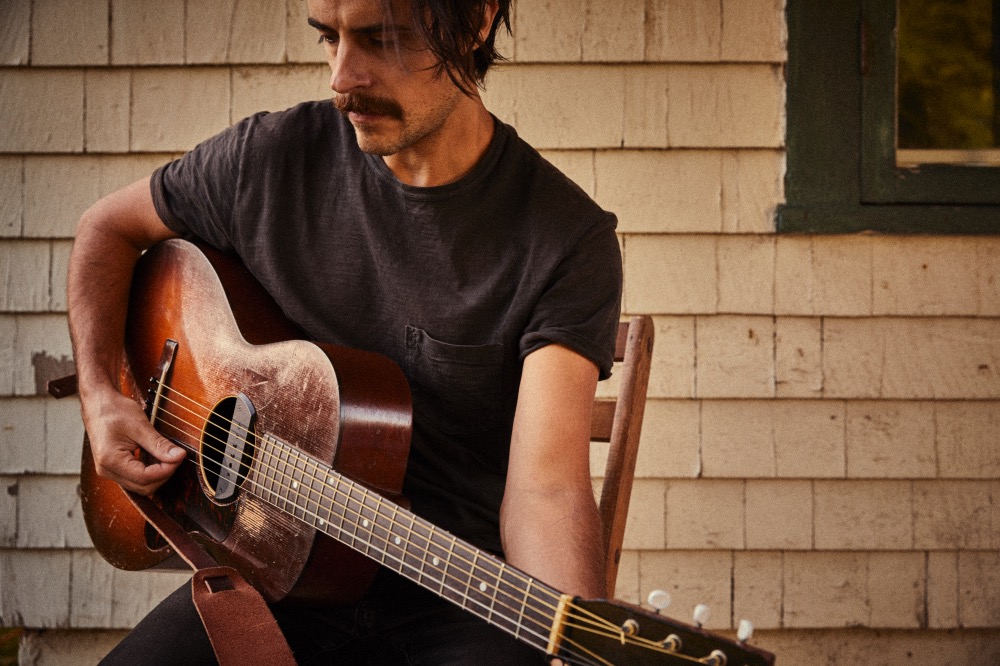 The majority of the time I travel by myself so I don’t need an incredible amount of room. These days I drive a 2016 Subaru Outback, generally covered in mud.

Happily nothing major to repair on this one just yet. However, my last car broke down in the middle of South Dakota. My tire blew out in the middle of nowhere. I went to the trouble of taking out all of my equipment on the side of the highway so I could get to the doughnut. Got the doughnut on and took the car off the jack only to find out the doughnut was flat too. I sat there for 5 hours before a tow truck came and got me, which towed me to the closet town which was another hour away. I always make sure the doughnut is full now.

Ha! I don’t. Or at least not the healthy part. Generally I get comped a crappy bar meal at my shows for dinner and in the morning, if I can find a decent cup of coffee I consider the day a win.

Countless. I am always questing for the perfect set of strings. As I write this, I realize that’s sort of a fool’s quest. Considering I always break the same string I try to be as economical about it as I can, but I generally spend about $8-10 on a set of strings.

These days, my rehearsal space is my attic. It’s the quietest and most removed part of my house so I can play the same song 100 times over and not annoy my wife (fingers crossed). Nothing extraordinary has happened… the only thing I would mention is that my house is old and crooked and so goes the floors. After sitting at the drum set for a while and playing you realize things start to shift towards the center of the house, because the house is that crooked. I’m constantly chasing my floor tom.

“Shine On Me”— Lord Lord won’t you shine on me. I know I ain’t the worst that you’ve seen. Make me believe.

I’ve been playing music for a long, long time. If we are truly talking about my first ever gig, it was for my crappy teenage punk rock band. I was probably around 14, hair colored blue and myself complete with studded belt and angsty whiney music. The show was at nunnery of all places. A room of full nuns watching some teenage privileged punks rail against the government. I always get a kick out of that. I have no idea how we got that gig.

I have been a full-time musician for almost 5 years now. Pretty incredible when I think about that. By far my favorite day job was as a baker. I have had a lot of good jobs, guitar tech, bartender, teacher, printmaker… but then one that satisfied me the most was the baker. People would be so happy to have a warm loaf of bread. Something so simple could brighten someone’s day…. I loved being able to provide that.

I have little expectations. Almost every year I expect to go back to my day job as I really never know how long I can keep this up. Being an independent musician I just kind of always feel like I’m living from quarter to quarter. Haha. My income as a whole has provided me with a chance to pursue this, that’s all I can say. Is it sustainable? I have no idea.

I think everyone knows what they are getting into when they choose this line of work… or at least I hope they do. I remember a mentor of mine, once likened the music industry to a knife fight. You are going to spill a lot of blood, the trick is not collapsing. I’m just trying to outlast everyone else. I knew that going in, and I remind myself of that daily.

Over the course of three full-length albums and two EPs, Jonathon Robert Linaberry — the songwriter, storyteller, visual artist, and one-man band behind The Bones of J.R. Jones — has woven his own tapestry of American roots music. It’s a classic sound for the modern world, influenced not only by blues, soul, and forward-thinking folk, but also by J.R.’s environment.

From the bustle of New York City, where he launched The Bones of J.R. Jones with 2012’s The Wildness, to the rustic solitude of his current home in the Catskills, J.R. has always looked to the world around him for inspiration. Few places have left him feeling as inspired as the American Southwest, an area whose desert panoramas and infinite horizons inspired the songs on his newest release, A Celebration. Written during trips to Tucson, Bisbee, Joshua Tree, and other desert destinations, the six-song EP is everything its title promises: a celebration of the thrill of getting lost in something new, whether it’s a landscape, a sound, a perspective, or all of the above.

Connect with The Bones of J.R. Jones online and (eventually) on the road.