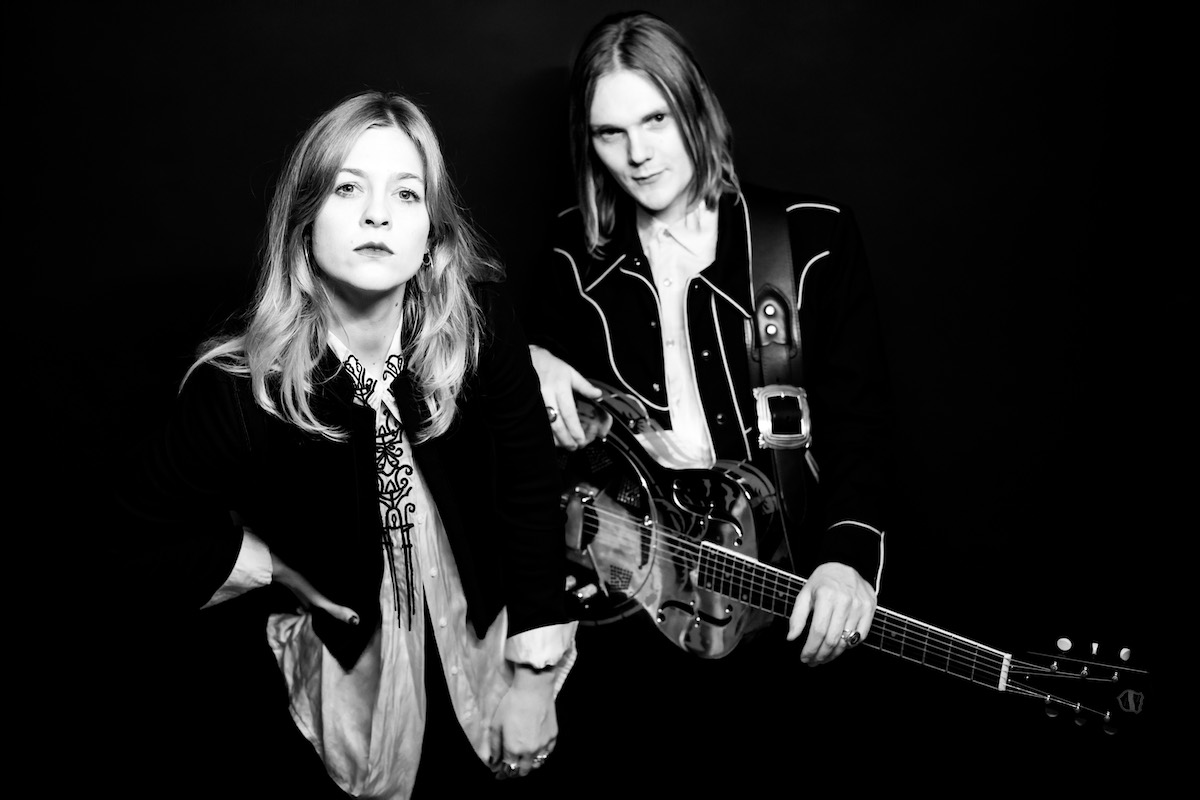 We have had so many over the years! From ex highway- maintenance LDV Vans, Ram Truck and 90s Volvos to touring the breadth of the States in a four door Kia sedan!

We try to check out cool local areas for heathy restaurants en route and then try to stop at large stores or supermarkets rather than rely on service station food. The occasional early morning drive through Egg Muffin breakfast is essential.

Chris is lucky enough to have Elixir Strings endorsement so despite breaking strings constantly (as he uses a thumb pic!) we are sorted on that front.

As a duo we just tend to rehearse whenever we may be! At home, hotel rooms, backstage. Occasionally we would hire a space to rehearse from if we needed a full band set up but we are also professionals at winging it!

I have no idea. I think the first full song I ever wrote was probably at the age of around thirteen and had lyrics written by my mother!

On stage at 3am at a dive bar in Shoreditch (London) to a very drunk crowd! And a ‘Disco load out’ to make it truly stressful – We thought we had made it!

We have been very lucky to have been full time musicians in various capacities for a very long time now but in our formative years Chris worked trading vintage and rare guitars and I was a nanny and waitress- all the cliches!

We have really seen our live fees really increase as our profile grows but the pandemic has been a struggle for all touring musicians and a real eye-opener as to how streaming has desecrated the working musicians’ earnings. We hope we’ll see a fairer distribution of streaming royalties.

We were lucky to start our careers when we were young so had a lot of time to learn about the highs and crashing lows of the music industry the hard way but without it being irresponsible! I think it’s good to realize early on how much of yourself you have to commit for often little gain and that you should never have to compromise on your art. To be honest I think it was better to go in a little blind as a teenager with completely pure intentions of playing live music with friends. I would always advise anyone going into the industry to have a good lawyer though..!

For nearly two straight years following the release of their critically acclaimed debut, Chasing Lights, Ida Mae lived on the road, crisscrossing the US from coast to coast as they performed hundreds of dates with everyone from Willie Nelson and Alison Krauss to Marcus King and Greta Van Fleet. And while those shows were certainly formative for the electrifying British duo, it was what happened in between—the countless hours spent driving through small towns and big cities, past sprawling suburbs and forgotten ghost towns, across rolling plains and snow-capped mountains—that truly laid the groundwork for the band’s transportive new album, Click Click Domino.

Written primarily in the backseat of a moving car, Click Click Domino embodies all the momentum and possibility of the great American unknown, offering up a series of cinematic vignettes full of hope and disappointment, promise and regret, connection and loneliness. The songs here are raw and direct, fueled by an innovative mix of vintage instruments and modern electronics, and the performances are loose and exhilarating to match, drawing on early rock and roll, classic country, British folk, and 50’s soul to forge a sound that’s equal parts Alan Lomax field recording and 21st century garage band. Turpin and Jean produced the album themselves, recording primarily on their own in their adopted hometown of Nashville during the COVID-19 pandemic, and while the collection is certainly bolstered by appearances from high profile guests like Marcus King, Greta Van Fleet’s Jake Kiszka, and Ethan Johns, the heart and soul of the record remains Ida Mae’s enthralling chemistry, which has never felt more vibrant, ambitious, or self-assured.

Now married, Turpin and Jean first met a little over a decade ago while attending university in Bath. The pair bonded immediately over their love for the sounds of bygone eras—Turpin, the old-time guitar work of Robert Johnson, Charley Patton, and Mississippi Fred McDowell; Jean, the timeless vocals of Ella Fitzgerald, Billie Holiday, and Bessie Smith—and quickly earned rave reviews everywhere from the BBC to the NME with their raucous first band, Kill It Kid. Starting over fresh with a new group named for Sonny Terry and Brownie McGhee’s “Ida Mae,” the first song they’d ever harmonized on, Turpin and Jean relocated to Nashville in 2019 and released Chasing Lights to similarly widespread critical acclaim.

Connect with Ida Mae online and on the road.