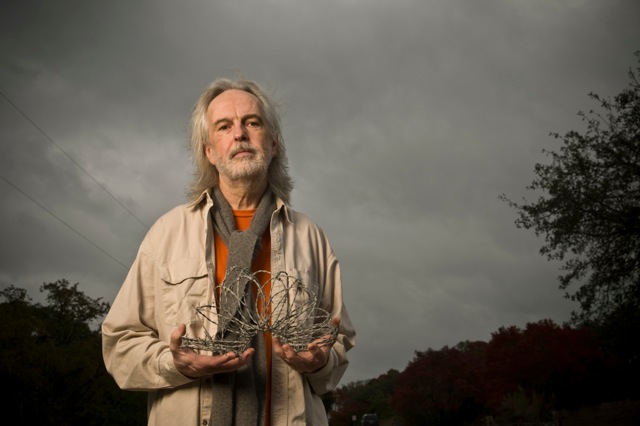 The desire to tour in a stretch Prius limousine sadly seems to be fading from my consciousness, and the days of the tour buses is long over. I usually tour in a rent car. Whatever I can get that has a trunk big enough to fit 2 guitars and a couple of suitcases. Words of advice: NEVER leave anything of any value in the back seat. Ever. Not even just while you go in somewhere for 5 minutes.

It’s important to eat well out there on tour. Try to make sure you can at least have a nice dinner every day. Traveling on the road is very stressful, and you need to treat your body well. Obviously, there are days when you have to eat lunch in the rent car. A sandwich, or something, that you bought in a gas station. But the show, that night, and the audience’s reaction, will make all the sacrifice worthwhile. Standing ovations go a long way toward easing the rigors of touring.

If you break strings, something in the equation is wrong. Most likely, you’re playing too hard. Probably because you can’t hear yourself well enough. Get the monitors to sound exactly like you like them to, and make sure they’re loud enough. No matter how long it takes. Very important. I haven’t broken a string in decades.

My rehearsal space is inside my mind. I can rehearse on a drive to the next city. Of course, that being said, when you write a song, it’s important to play it over and over. Hundreds of times. To make sure that every syllable is as perfect as you can make it, and to get used to singing it.

I wouldn’t even want to try to recall that. I’m sure it was horrible. Robert Earl Keen told me a story once about Butch Hancock judging some loose kind of songwriting competition. After a person played their song, Butch would write a number down. Numbers that didn’t make sense to Robert. One might be 15, and the next one might be 500. After one song, Butch wrote the symbol for infinity. Robert asked him what scale he was judging them on. Butch said he was guessing how many songs the person would need to write before they got a good one. That’s an important lesson. I figure I wrote at least 200 before I wrote one that people responded to. With persistence, the hard work pays off.

I was probably 15. A rock and roll band called The Plague. We were probably terrible. We made $40. $8 each, and we were ecstatic! The buzzing finally simmered down a bit, but I still get a bit of that feeling after every show. Takes me a few hours to stop vibrating.

Never had one. Unless you count record producer as a day job. That’s a pretty good one. I did used to tune pianos. That was a bit of an informal day job.

It was pretty easy out there when I started. Gigs were plentiful, and rent was cheap. It has gotten harder and harder ever since. There are so many people out there trying to do exactly what I am trying to do, which is write songs, record them, and then play them for people. When I have a criminally under-attended show, I try to remember that I have a 20 year plan. By the time I’m 87 I’m gonna be filling rooms wherever I go.

One of the benefits of having been around a long time is that I’ve learned what’s important, and what’s not. This comes, of course, as a result of making many mistakes over the years. I’ve learned from each one of them. There are no deadlines. I’ve learned to like the sound of them, as they whoosh past.

Buffalo born, Texas bred Gurf Morlix has created countless indelible musical moments in the last 40-plus years: his exemplary guitar and production work with Lucinda Williams; his instrumental accompaniment to artists ranging from Blaze Foley to Warren Zevon; his production of watermark albums for artists such as Ray Wylie Hubbard, Robert Earl Keen and Mary Gauthier – and, since 2000, a series of eight solo records that have a singular worldview and can be both harrowing and heartening, often at the same time.

Morlix will release Impossible Blue, his 10th album, on 8 February. Connect with him online and on the road.