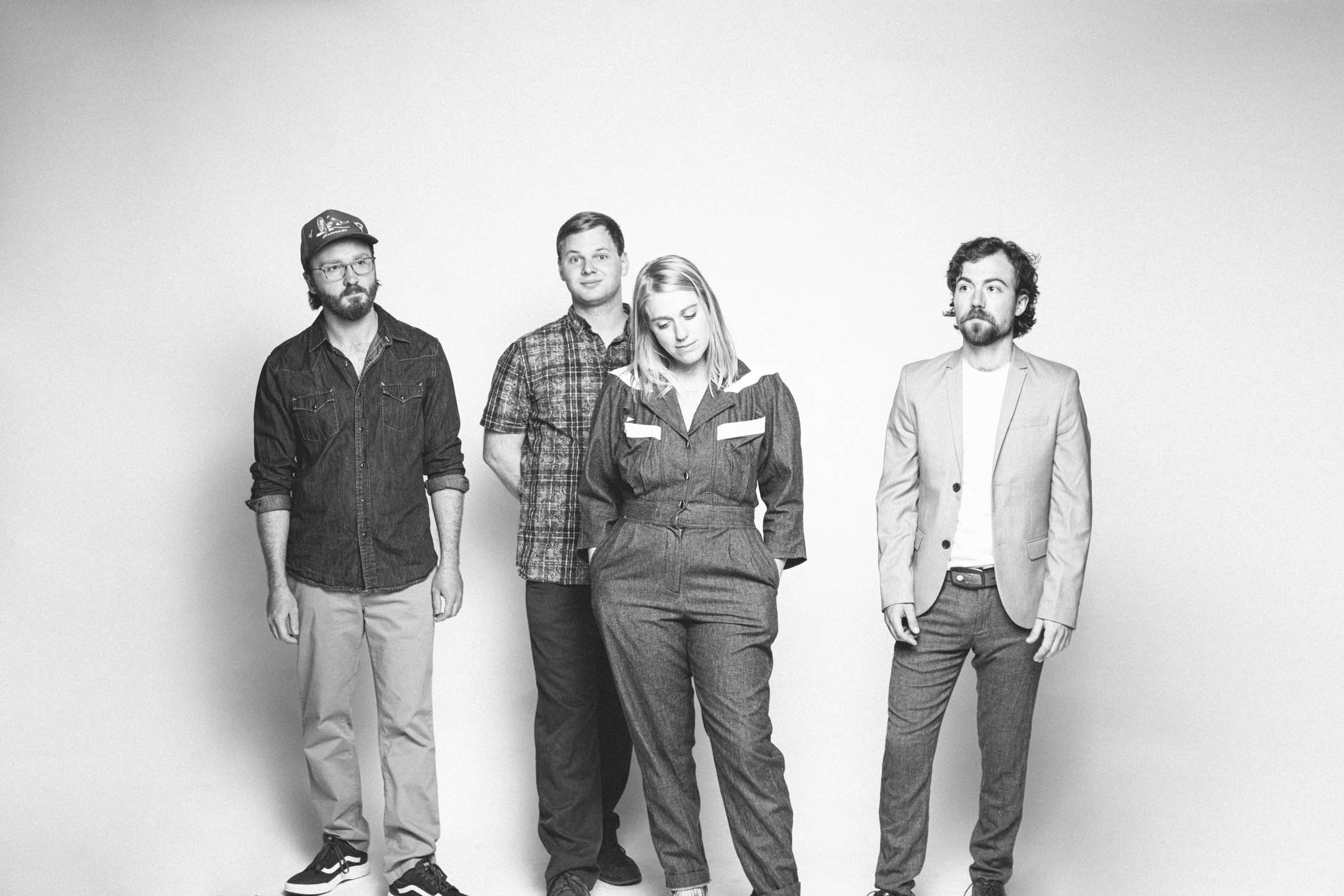 We have a 1996 Ford Econoline Van. Up until 2018, it belonged to Allen Cooke (dobro player’s) family, and I bought it off his dad. She’s got a good 144,000 miles, and the Cooke family took great care of her. Fun fact: Dylan McCarthy (mandolin player) and Allen drove to Texas in that very same van when they were 18.

The most notable breakdown story is when we were on 1-80 in Wyoming and the axle snapped on the back right wheel. We got to the shoulder safely and watched the wheel roll in huge circles around the highway until it landed in the median. We got out of the van and the place where the wheel was was on fire, and Dylan was trying to put it out with a bottle of Topo Chico. That image always makes me laugh, even though at the time we were pretty stressed. We had to get towed to the nearest town and rented a minivan for the rest of the tour.

It can be really hard! Last tour we hit up a Whole Foods in every city we went to. Not necessarily cheap, but at least we could all get some greens. I wish I was better at food prep, but for the most part it’s the pizza that the venue gives us and salads from Whole Foods.

That depends on which instrument you are talking about. I (Erinn, the guitar player) used to break strings frequently when my technique wasn’t as good, and it would always upset me on stage. Dylan and Allen (mandolin and dobro) replace their strings probably once a week on tour.

We don’t exactly have a rehearsal space. We don’t have a drummer, so we are much more portable. Lately we’ve been practicing at my house in Golden. Two band members live in northern Colorado and the other in Denver, so Golden is a nice middle ground.

One of my first paid gigs was when I was in college and there was some sort of health fair outside of a strip mall where I was living in Seattle. My best friend accompanied me, and I played after a band of big biker dudes. I realized I forgot my capo, and after their set one of the guys hopped on his motorcycle to go home and get a capo for me. I’ll never forget that guy!

Currently, I teach guitar lessons to kids, but I also just got a part time job hiking dogs on Colorado Trails. It sounds fun, but there is a definite art to walking four dogs at once and I am still learning.

In the past 3 years, I’ve been able to make more money playing music than with any other job I’ve had. I’ve only worked food industry, childcare and pet care jobs, which don’t pay much, but every day I look around at my apartment, instruments and clothes and feel lucky that music has allowed me to support myself and my lifestyle. In 5-10 years, I am going to buy a house in Golden (where I live in Colorado) with money from a hit song – I know it!

When I started out, I was extremely naive. I’m the only musician in my family, so I had no basis for what a musician’s life is like. For a very long time, I was under the impression that I would play a coffee shop in NYC and get “discovered” and life would be gravy from there (thanks musician biopics). I would say I wish I had known that the music business is not like that anymore, but I’m actually glad I didn’t know better when I was younger. Being so dreamy and green gave me a lot of stamina to survive a lot of unpaid, terrible gigs that I will never do again.

Erinn Peet Lukes has an angelic voice that soars over a blanket of acoustic sound. Thunder and Rain’s music lives somewhere in between folk, country, bluegrass, and pop, made cohesive by Peet-Lukes’ “nimble, yet devastating” vocals, heartfelt lyricism and a high level of musicianship from mandolinist Dylan McCarthy, bassist Ian Haegele and Allen Cooke on Dobro.

Peet Lukes didn’t know anything about bluegrass or country when she wrote her first song at thirteen in her hometown of Redondo Beach, California. She pursued her love of performing original songs through major music hubs like Seattle and New York City, until she landed in Golden, CO in 2013. She began to explore bluegrass jams in the Denver area, where she would eventually meet bass player Ian Haegele and her co writer and then band member, RP Oates. Thunder and Rain recorded their first record, Holler Out, in 2014.

Since their first effort, the band has toured across the US, Canada, Ireland and the UK. They were finalists in the Rockygrass Band Competition in 2014 and named #1 Bluegrass band by the Denver Westword in 2016. In 2018, Peet Lukes became a New Folk Finalist at the Kerrville Folk Festival.

Thunder and Rain released their third album, Passing in the Night, in January 2020. The album was written after Peet-Lukes went through a break up within the band. If the band’s third album was a movie, it would be a series of vingnettes, detailing the different ways two people can meet, connect, and then disappear from each others lives. This music is inspired by a whole host of genres, from classic country to old time, bluegrass, pop, and folk. The strings add dynamic shifts for the confessional songwriting that comes directly from her life.