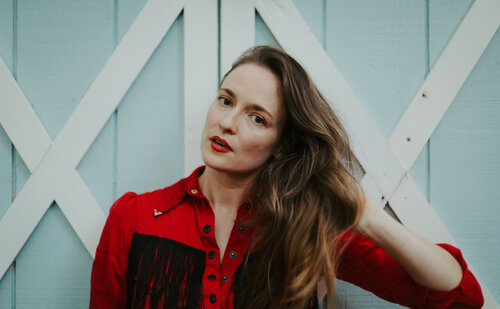 Oh my. I’ve had many a touring vehicle, VW wagons and busses, rental vans, other people’s tour busses, a stint owning a Sprinter (while living in Brooklyn, parking was tricky to say the least!). For my most recent European tour I took trains for the first time and that was really nice.. easy to do when you’re traveling as a solo act, not so easy with a band.

Quite a few notable breakdowns- one that comes to mind was en route to a gig in Wisconsin in the middle of a winter blizzard. I was touring with a drummer and bass player when we got stuck in traffic on the interstate for over 7 hours, our heat went out and we had to climb in the cabin of the Big Rig behind us to keep warm. The driver shared his snacks with us and we listened to his CB radio for updates. Apparently a truck had overturned on the county-line and neither county wanted to pay to send help. It was pretty scary for us and others too. I learned the next day that one woman had to deliver her baby in a car, stuck in that same epic traffic jam.

It’s tough. If there’s time I’ll seek out the cool healthy spots but most of the time unfortunately it’s gas station food, God Bless Marks and Spencer’s on the motorway in the UK, I wish our gas stations had healthily options like that in the states. As long as we have some good food on the rider, fruits and veggies will make their way into the van. I rely on Yelp and promoters to recommend good spots in the area. Also, playing the same towns over the years, I’ve got some favorite stops.

I try not to change strings that often and hardly ever break em. I love the sound of the dull salt-worn ones. I probably change my strings two to three times a year and still haven’t finished the box of D’Addario’s I’ve been working on for a few years now.

I had a basement rehearsal space in Brooklyn for many years which was necessary because I always had roommates! Since moving out of NYC I’ve been able to rehearse at my house or musician’s homes for smaller configurations and rent out a space here and there if there’s a full band gig coming up.

“Today I got my wisdom teeth out and it reminded me of how much I hate you.”

From the song “Gretchen” written for my brother after he got his heart broken by, you guessed it… a girl named Gretchen.

My mom was a wedding coordinator when we lived in Branson, MO and I sang at a few of the weddings she put together. I was 12 or 13. “A Whole New World” was definitely in my repertoire!

The last day job I can remember was over a decade ago. I had a temp job at Pratt University in Brooklyn, answering phones in the tech department. I liked the crew down there, we were a motley mix of Ren-Faire goers, fishermen and wizards… it felt a little like Freaks and Geeks. My favorite day job of all time was working at Unoppressive Non-Imperialist Bargain Books on Carmine Street in the Village. I worked there on and off for about 5 years and still love the place.

It’s consistently inconsistent enough that it seems not much has changed in the past 10 years but now I have a lot more expenses (a house, a car, a wonderful kid and family)… I hope to stay afloat, but I really have no idea what’s coming next, especially in the middle of this pandemic. I hope that streaming services will eventually pay a fair rate to songwriters but there’s no guarantee. I just feel lucky to be here.

Slow down on stage. It’s so easy to get carried away in the excitement of a gig that the songs can speed up too much. When your heart’s racing the tempo often follows.

Dawn Landes is a Nashville based singer-songwriter whose music you might have heard if you watch The Good Wife, House or Gossip Girl. Along with releasing five albums since 2005 (and an EP inspired by yé-yé, ‘60s French pop music), she’s a frequent collaborator with contemporaries such as Sufjan Stevens, Norah Jones and composer Nico Muhly. She has appeared with the Boston Pops, the NYC Ballet and on the TED main stage performing songs from her musical ROW about fellow Louisville native Tori Murden McClure’s quest to become the first woman to row across the Atlantic Ocean.

Landes recently released her recording of the soundtrack from ROW. The musical was originally scheduled to premiere at the Williamstown Theatre Festival but was delayed due to Covid 19. It will soon premiere instead on Audible, in partnership with the Festival.

Connect with Landes online and (eventually) on the road.