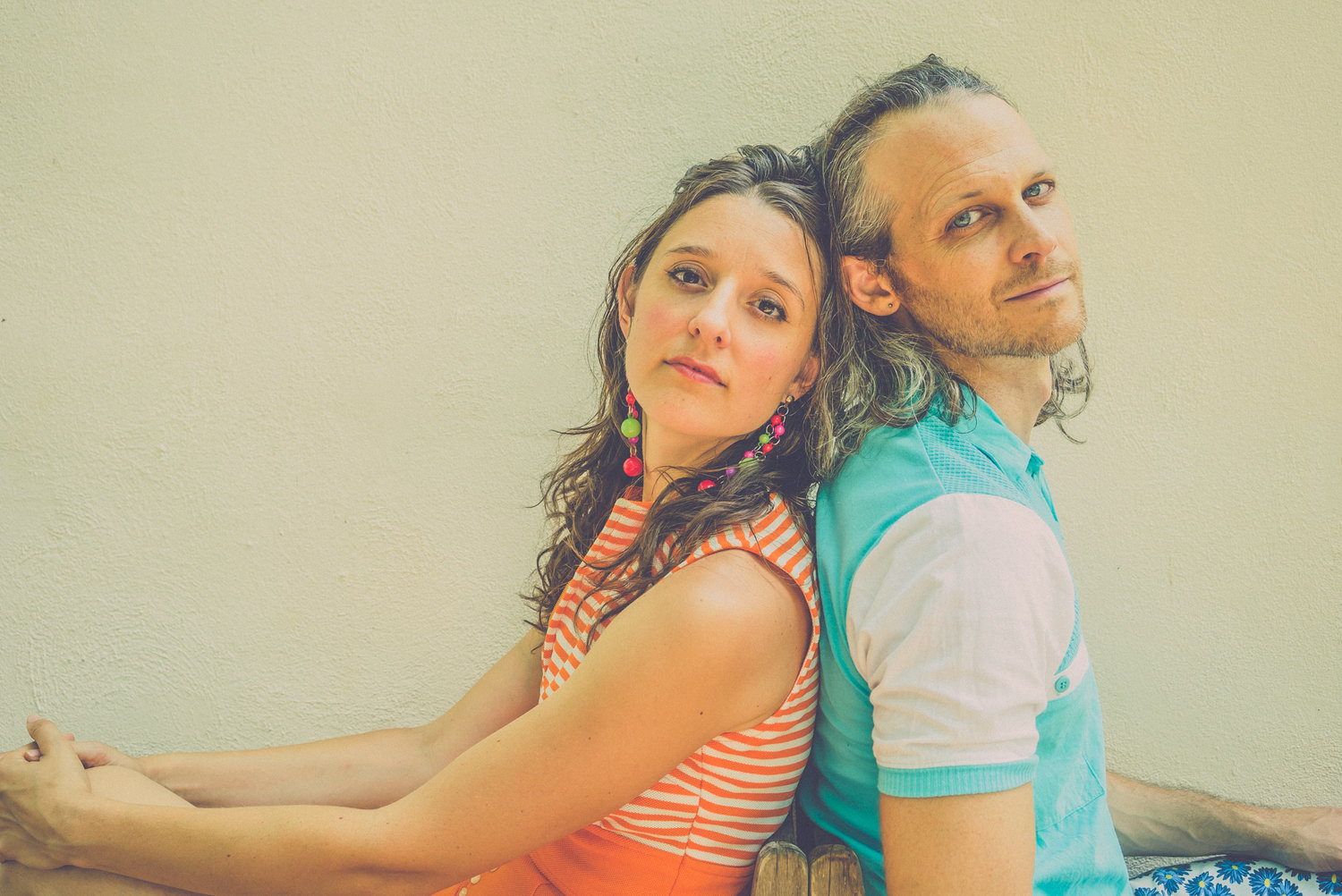 El Burro Blanco, a white 15-passenger Ford Econoline van with 275,000 miles on it. We bought it used in 2011 with 40,000 miles on it. The transmission died two summers ago just as we were pulling into our hometown of Charlottesville after driving to Missouri and back. It has a bunch of quirks now. The air conditioning only works when it’s on full blast. The front passenger door doesn’t open from the outside. And you have to jury-rig the gas pump to get a decent flow of gasoline.

We often make a version of this special road salad: pre-washed greens, ripe avocado, radishes, seeds/nuts, a dollop of kimchi, a hard boiled egg, a spray of Bragg’s amino acids, goat cheese, & top it all off with sardines.

I often strum too hard because I never get enough of the acoustic guitar in the monitor, and so I easily can break 2-3 strings/set. But I’ve really been working on playing more gently. I buy strings in bulk (a 12 pack for $70) about once a year.

It’s almost impossible to break strings on my jarana jarocha, and so I end up strumming away on the same strings for a year or two. Once we have a recording session on the books, I’ll finally change the strings. I order them from a company that specializes in Mexican stringed instruments called Guadalupe Custom Strings in East Los Angeles.

Unfortunately, we don’t have a consistent rehearsal space besides the living room of our house. This is particularly challenging for us because we have two kids, and they’re often at home while we’re trying to rehearse. We’ve had many rehearsals with one of our kids in a bouncy seat with a huge pair of baby headphones on for the noise. Now that our kids are a little older, they don’t like when Mom and Dad rehearse because it takes all of our attention away from them. As a result, they’ve devised different ways to disrupt the rehearsal, ranging from banging on drums or the piano to getting in a tussle that we have to break up.

I started writing songs with my cousin Jordan when we were thirteen. We were at summer camp and had just learned how to play guitar. The first line was, “I find I’m always looking / but I never can be sure.”

A classmate’s birthday party. Our drummer’s dad was in a band, so we set up his Peavey PA in the basement and played every song we had written in our first six months as a band. I actually have a photo from that gig. We were using music stands and reading the lyrics. Very punk rock! 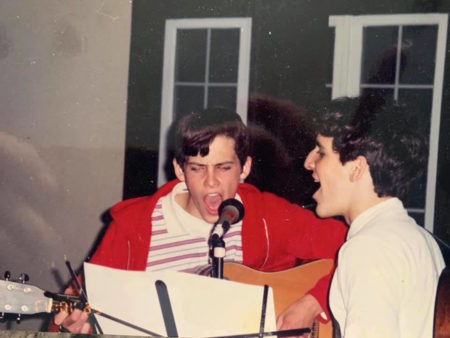 David Wax and cousin Jordan Wax of The Cat’s Pajamas band, circa 1995. (Photo by Susan Flaker)

The last job I had before the band touring took off was as a teaching fellow for a sociology class at Harvard — “Life and Death in the USA.” For many years I thought I was headed down an academic track, and in some ways, I was keeping the door open by hanging around Cambridge after I graduated and picking up random research assistant jobs. It was flexible work that I could fit in with open mics, busking, and weekend tours around New England. As much as I had loved my experience in academia, I got such a kick out of the hustle of starting a band, chasing down gigs, and, in general, just being a creative entrepreneur. And I felt so invigorated by where music took me. While studying Latin American history, it was easy for me to spend all my time in dusty archives, scanning through microfilm for hours on end. But, as I started studying Mexican folk music, I found myself chasing down inspiring musicians and lively fandangos (Mexican musical gatherings) in far-flung towns throughout rural Mexico. It gave me a taste for the life of an artist, and there was no turning back after that.

One of the most striking things about our income these days is that the majority of it comes from the DIY duo tours that Suz and I organize ourselves. When we tour with the full band and crew, we are still lucky to break even. The costs just add up so quickly when we have several musicians with us, a road nanny (because we tour with our two kids), and a tour manager. We love putting on the bigger shows at rock clubs and nightclubs and think it’s important to keep putting the dream version of the band out into the world. But the reality of it is that when Suz and I set up DIY shows, sell the tickets ourselves, bring the PA, and crash with whomever is hosting the show, we find that we come home from tour with something to show for it. Between record cycles, it seems like the DIY duo touring is the best way to keep ourselves sharp and stay engaged with our biggest fans.

I know it’s common for musicians to lament the loss of CD sales that used to help independent musicians like us eke out a middle-class life. And, sure, it would be great if we could count on more income from CD sales at stores or online. But, it’s a different reality now. And in this new world, there is even more hustling and creative problem solving about how to survive. We’ve had to develop several different side projects and side hustles to pay our bills, but it means we’re always stretching ourselves in new directions, building relationships throughout the arts community, and reinventing the model for how to be artists. There’s no formula that works. Everyone has to figure out their own version of success as a working musician.

It never truly gets easier to focus on the art. It’s a lifetime challenge, to prioritize making time and space for being creative. It’s easy in the early days to fantasize about how you’ll finally be able to focus solely on the art once you have a (______) – fill in the blank with booking agent, manager, business manager, record label, etc. And yes, those people are enormous helps and have made a huge difference in our career, but as things grow, you have more complex problems to juggle. Eventually you just have to face the fact that it’s the challenge of being an artist and that no one thing will suddenly make it a breeze.

On this same note, I’ve found that as soon as I stop wanting something desperately and get over the idea that it will somehow solve my problems and make me feel “successful” or a sense of arrival, that’s usually when the opportunity comes our way or the new person comes on board the team. I think knowing this would have saved me some trouble in my early, most ambitious days.

The roots of David Wax Museum stretch back over a decade, and all the way from New England to Mexico. As a student at Harvard, Wax began traveling south of the border to study and immerse himself in the country’s traditional music and culture. Back in Boston, he met fiddler/singer Suz Slezak, whose love of traditional American and Irish folk music fused with Wax’s Mexo-Americana into a singular, energetic blend that captivated audiences and critics alike (Bob Boilen of NPR Music hailed their live performance as “pure, irresistible joy”). Their 2010 breakout performance at the Newport Folk Festival made them the most talked-about band of the weekend, with NPR hailing them as “pure, irresistible joy.”

They released a trio of albums that earned escalating raves everywhere from SPIN and Entertainment Weekly (who described them as sounding “like Andrew Bird with a Mexican folk bent”) to the New York Times and The Guardian (which dubbed the music “global crossover at its best”). They earned an invitation to return to Newport, this time on the main stage, as well as dates supporting The Avett Brothers, The Carolina Chocolate Drops, Buena Vista Social Club, Guster, Los Lobos, and more.

Line of Light, their latest album, was released this month. Connect with the band online and on the road.