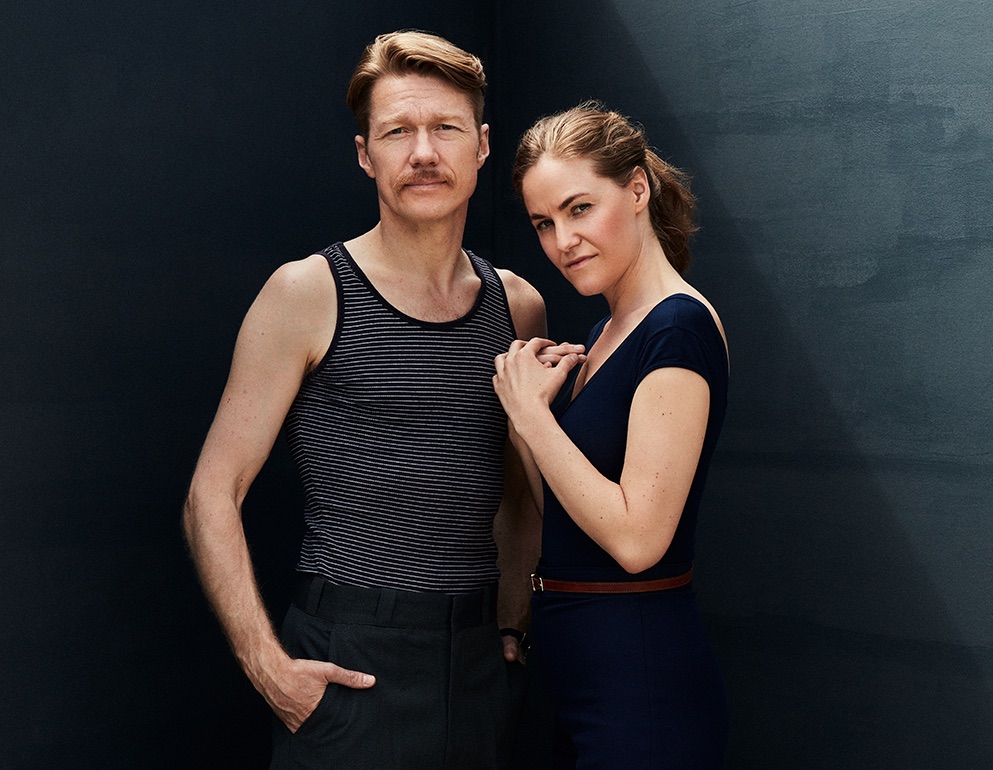 Mari Sandvær Kreken: We have a Ford that we drive in Norway. It fits just barely in our garage (which is super-convenient with all the snow during wintertime) and we’ve become quite skilled in packing it to the brim when we travel as a four piece.

When we tour abroad we always rent a van. This year has actually proved a little unfortunate in that area. In March we crashed our rental in Madison, WI. Luckily it was a minor accident, no one got hurt and we could drive the same car for the rest of the run, but it was still a horrifying experience. And in September we had a break in with a smashed window and a stolen computer in San Francisco. So we kind of feel that we’ve had our share this year. Maybe next year we’ll have more luck.

Mari: Yeah. That’s not the easiest thing in the world. We always bring a lot of vitamin supplements, omega 3 pills and apple cider vinegar. Sometimes we buy some good bread and avocado and some other spread to make sandwiches in the car, instead of turning to the good ol’ burgers and fries or Mexican food. But sometimes you also have to just go with the flow and be onboard with the different lifestyle that touring is, and get whatever nutrition you can get, and go for the healthier choices in the periods of time you stay at home.

Tor Egil Kreken: We don’t break a lot of strings. Mari uses a few different tunings on her guitars, so every once in a while one will break during tuning, but surprisingly seldom. We change our strings 2-4 times a year as we’re not dependent on nor fans of fresh, bright strings. On some of our instruments we use flatwound strings, and they hardly ever break. A set will last for years, but we usually replace the top three strings more often. A single string usually costs 3 to 4 dollars.

Mari: For a while we tried to rehearse in our own apartment, and that still works during daytime when we only play acoustic instruments as a duo. But when we tried upping it with some amps it didn’t sit very well with our neighbours (we had a couple of really uncomfortable encounters), so we stopped that pretty quickly.

When we rehearse with the band we have a space in an old warehouse. It’s super cold in the winter and roasting hot in the summer, but it works. We all avoid going to the restroom for as long as we can, because it’s located in a really creepy basement that is not very tempting to have to visit. Haha!

Tor: The first song we ever wrote together was actually called Darling West, and that’s where we took our band name from. It was written up in the Norwegian mountains in a cabin surrounded by the most beautiful scenery. It’s built around an idea about the four winds (Anemoi in Greek mythology), giving them each their own character.

West wind, west wind, forgive me for forgetting that you’re mine
Darling west wind, will you stay with me a little longer just this time

Tor: We have a favorite bar in Oslo called Revolver. It’s where we used to hang out whenever we could. We became friends with the owner, and at some point he asked us if we could perform a few songs at his 30th birthday party. Playing that night is what made us decide to form a band.

Tor: I don’t have a day job anymore, but my last one was working in a record store. That was a lot of fun but also quite stressful at times. I think my favorite day job was working in a kindergarten, spending a lot of time outdoors and hanging out with 4 to 6-year-olds. My kind of people.

Mari: I have also stepped into the world of music being my only income. I’ve worked different day jobs up until a few years back though. My education is being a florist, so I worked in a flower shops for several years, after that I did clothing design and I’ve also worked in an institution for disabled people. The latter being my favorite, I think. Sometimes I miss taking a break from the self-involved work that comes with being a band and making it your main income. Not to sound over altruistic It’s also for egoistically purposes.

Tor: We’ve been a band for around eight years now, and we don’t really feel it has changed that much for us. Our main source of income is live shows and selling merch. Streaming doesn’t generate much money, but it’s a brilliant way to reach people and build audiences in different parts of the world. We would never have been able to build a fan base in the US the way we have twenty years ago. And of course we hope to continue building that audience and play for bigger crowds and reach more people with our songs.

Mari: It’s hard to say what it will look like. Probably similar to the way it is at the moment, hopefully with a growing fan base. Our type of music is not in the hip genre where you have to be cutting edge and have a new peak for every track you release. Our listeners are mostly music interested people and they will always be around to receive heartfelt songwriting. House shows are becoming a big thing, so maybe that will keep on growing? And we have to hope people will keep on going to see live music. That’s the best way to support the bands you love, and it’s also such a different and healthy way to listen to music. You connect to each other in a total different way by being in the moment together, both performers and listeners.

Mari: That nothing comes without putting in the effort. I think that has been in the back of our minds always though, we’ve always been willing to work hard and love to practice our instruments. Apart from that maybe the fact that you can’t please everyone. Your music have to come from an honest place in yourself, then it will go straight to the core of some people and others will pass, and that’s totally ok. (Sometimes still hard to accept though.)

Darling West are always on the move. Since the release of their Spellemann-winning (Norwegian Grammy) album Vinyl and a Heartache (2016), they’ve been to the United States so often that you easily could call it their second homeland. Their Nordic twist on American songwriting traditions was further showcased with While I Was Asleep (2018). This time, parts of the new album was written in Nashville and on the tour both in the US and Europe.

We’ll Never Know Unless We Try, the group’s latest release, was recorded in Propeller Studios in Oslo, and is produced by Kåre Chr. Vestrheim (Marit Larsen, Highasakite). The music regularly pays tribute to heroes such as Fleetwood Mac, Jackson Browne and The Byrds, while what’s become the trademark Darling West sound seeps through everything: with acoustic beauty, gorgeous harmonies and melodies that won’t let go.

Connect with Darling West online and on the road.