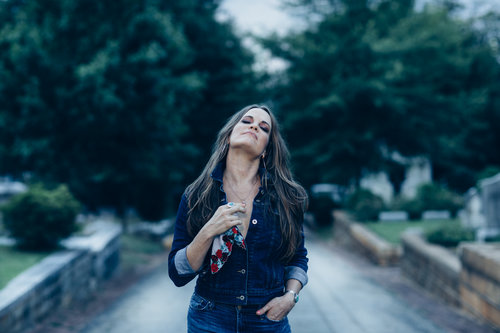 We tour in a white 15-passenger Chevy van with a brand new trailer (thanks to our friends at Herb’s Trailers in Baton Rouge!) This is the third Chevy van I’ve toured in since 2004. Ryan (Tharp) bought it after his RV broke down on tour with his old band and he had to sit in Tennessee for a week waiting for them to fix it. He came home and bought this van the very next week and has generously allowed me to use it for the last two years. We are currently nearing 100K and just had to put our third set of tires on it but other than that, this van has been good to us. Never had a breakdown personally – thank you CHEVY!

Ryan and I eat pretty healthy at home, as does the rest of the band, but the key for all of us being on the road is just to eat LESS. I recently quit drinking again (for the second time) because I can’t keep up with our schedule if I’m hungover on tour, so I’m saving lots of money and calories there. Also Harmoni and I like to get up before the boys and workout every day and that’s the most important thing for maintaining a healthy body on the road – KEEP IT MOVING!

Our daily food routing usually begin with a Starbucks run: vanilla latte no foam for Ryan, whole milk latte for me, black coffee for Clint, and Harmoni drinks coffee with cream…I think. We keep fresh fruit and vegetables on our rider, as well as nuts, beef jerky, hummus, whiskey (for colds, of course), honey, and fresh lemons so that’s our supply of free healthy snacks. Lemons are lifesavers – lemon water detoxes the body and the acidity helps when my vocal chords are tired from oversinging. I also gargle salt water to keep them bacteria free.

I don’t know how many strings I break a year but it’s always in the middle of a show. I break my G string more than any others and if I have a set of strings in my guitar case, that is usually the one that is missing. I like to use Elixirs on my Collings, which cost about $13 a set.

Ryan has a bad ass studio that he built in his house, so that’s where we rehearse. Sorry no exciting stories, it’s just work!

“Men Are Like Buses,” inspired by my college roommate’s mother who gave me this piece of advice about dating: “Bonnie, men are like buses. If you miss one, there will be another one by in fifteen minutes.”

Poodie’s Hilltop Bar & Grill outside of Austin. My first guitar player, Rob Albertson, convinced Poodie Locke to let me play there after he was dared to eat from the jar of hot pink pickled eggs that had probably been sitting on the bar for years. “If your friend is that talented, then eat them pickled eggs. Then I’ll think about giving her a gig.” Rob had a rockabilly band that was able to back me up and we rehearsed seven songs for my live debut. The whole church choir from Tarrytown Methodist Church came out and filled that place. They even made t-shirts for the gig and some of them still wear them out to my shows to this day!

The last day job I had was working in a catering kitchen and I absolutely LOVED it. I would go back and do it part-time in a heart beat. My boss was a really cool chick that let me have input when it came to recipes and I found that I love to make food almost as much as I love making music. I first worked for her when I was in graduate school but I also used to pick up work in her kitchen when I was living in Nashville. I really enjoyed not wearing makeup or being onstage, just being part of a team that was creating fun experiences for people through food and hospitality.

My primary source of income has always been live performance. I’ve hustled for every dollar that I’ve made over the last eighteen years. The only time in my life I ever had a regular paycheck was when I had a publishing deal for four years in Nashville. Even then it required me to do gigs in order to make enough to pay the bills.

Making money in this business has never been easy because there are a lot of people vying for the same spots on stages and it requires you to be extremely self-motivated, pro-active, and undeterred by rejection. It feels like it’s gotten even harder in recent years because the market for live music is so oversaturated, but all I can control is my output. I have to keep digging deeper to create even more meaningful content, keep being resourceful and frugal when it comes to how and where we tour, and continue to put one foot in front of the other. I’ve always believed that is the key – just keep doing it. I trust that the quality of my songs and the strength of our live show will keep me working for years to come.

I wish I had known that the journey was the destination and that the artist I wanted to be was inside me all along. The only way to find out who I was as a songwriter and a singer was to take the human journey of discovering my true self, my higher self. I wish I had focused on that from the beginning, on finding self-love and acceptance and peace instead of trying to find a version of myself that everyone in the industry would like. I don’t think that person exists…the real me is the raw, emotional, sensitive, creative, authentic girl I’ve been since birth. I wish I had been comfortable being that person from the beginning.

Bonnie Bishop began playing original music in dive bars and honky tonks across her native Texas, eventually moving to Nashville in 2008, sharpening her acclaimed songwriting chops with writers Mike Reid, Jimmy Wallace, Al Anderson and others. Her big break came when Bonnie Raitt recorded a song she and Anderson wrote entitled “Not Cause I Wanted To,” helping snag a Grammy for Best Americana Album in 2013. In all, Bishop has recorded five albums, rising though the country/Americana ranks and receiving various awards for her songwriting. A few years ago she decided to take a hiatus from the stress of the business and enroll in Sewanee University of the South, working toward a master’s degree in creative writing.

In 2016, Thirty Tigers convinced her to record a new album with producer David Cobb, the universally acclaimed Ain’t Who I Was, which brought her back with a splash and showcased the more soulful side of the dynamic singer.

The Walk, her latest album, was released on October 4th. Connect with Bishop online and on the road.