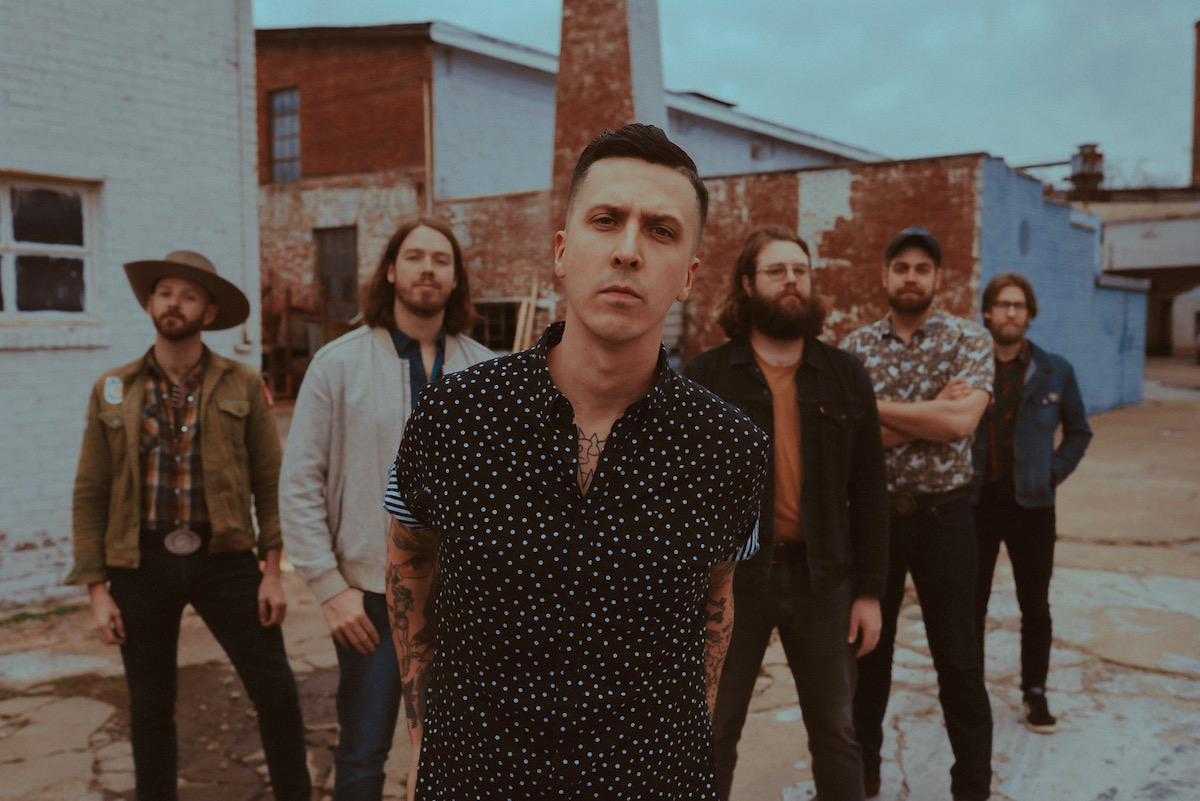 We have been in a bus since Things Change came out in 2018. Life got a whole lot easier when we were finally able to make that jump. We spent the first 13 years touring in a 15 passenger van. In 2007, we bought our first touring van. It was an old 2003 Dodge Cargo Van with no trailer and no air conditioning. I still don’t know how we crammed seven guys and all the gear into that van every night.

We had a friend in Alabama make decals that said “American Aquarium Baptist Church-Raleigh, NC”, to run along the side of the van to help prevent break ins and keep the cops from pulling us over. Surprisingly enough, it worked extremely well for both. She died right around the 200,000 mile mark.

In 2010, we made the jump to a 2007 Ford E350 with a trailer and we thought we had hit it big time. Every member of the band got their own bench seat. We would have three more E350’s before moving into the bus. We put around 250,000 miles on each one before upgrading to a newer one.

We were always lucky with break downs. We have never had to cancel a show because of van troubles. Cut it real close a few times, but luckily always made the gig. Biggest breakdowns were all routine stuff. Batteries dying, alternators going out, trailer tires blowing, etc. I’ve heard some horror stories and I feel extremely fortunate to have only had minor brushes with catastrophe.

Early in the band’s career it was close to impossible to eat healthy. We were all broke and the $.99 menus were where it was at. If the clubs fed us in the early days, it was always pizza or chicken fingers, so not really a healthy option at the venues either. Top it all off with the free case of PBR every night and the lifestyle can definitely start to take its toll on your body physically.

The more successful the band got, the more attempts we made at healthier choices. Stopping at Whole Foods for lunch every day was the game changer. Everyone got to choose something they liked and you had the option to eat healthy.

My recovery led me to making time on the road for physical fitness. I run every day after soundcheck just to explore the city and get the blood pumping. It’s amazing how just a few miles a day can completely change your mood on the road.

I don’t break nearly as many strings as I used to in the earlier, drunker days. I change my strings every couple weeks when we are on the road. Luckily, we are sponsored by D’Adarrio and they send us all bulk boxes of strings before every tour. When they got behind the band, it was a total lifesaver.

We don’t have a rehearsal space. The band is spread out these days between Raleigh, Austin, Atlanta and Nashville so the only time we are all together is for tour. Even in the early days, we’ve never been a “rehearsal” band. We always just showed up and played. After you start playing 250-300 shows a year, the shows become the rehearsals. Any new material gets worked out during soundcheck. We will soundcheck a new song/old song we are bringing back a few days in a row and then just throw it in the set. Trial by fire is the preferred method around here.

I wrote a song called “Turtleneck Sweater” in high school. It was about a girl that I liked who wore a lot of turtleneck sweaters. Extremely deep subject matter. haha.

Our first gig was on my parents’ back porch. We set up a full band and PA. My mom stood at the end of the driveway and charged $10 a car and my dad directed parking in our yard. All the kids from high school set up blankets in our backyard and we spent an hour playing songs. I had no idea what I was doing, but loved every second of it. Being in front of people performing is what I was put here to do. That first moment only solidifed that for me.

I am extremely lucky that music has been my only job for quite some time now. My last straight gig was back in 2008 waiting tables at a fancy Italian restaurant in Raleigh. I got fired because my touring schedule was getting too hard to work around. That was the “leap of faith” moment for me. Instead of trying to find another job to get me from tour to tour, I told myself I had to find a way to make music support me. I jumped and luckily landed on my feet.

Drastically. I’m extremely fortunate to be able to make a comfortable living writing songs. Which is pretty incredible when you think about how many great sognwriters are out there hustling to do the same thing I’m doing. I’m finally at a point where I’ve caught up with my friends who finished college and worked their way up the corporate ladder. It helps that I never gave away any of my music. Not many songwriters own every song they ever wrote. That was the one thing I refused to give up.

In a world of streaming, it is extremely advantageous to own your entire 15+ year catalog. As far as the future, I’d just like to be able to keep writing songs for a living and playing them for people. This year was better than last year and as long as next year is better than this year, our small business is moving in the right direction. Again, I am beyond thankful that I’m able to make a living doing something I love. I never lose sight of that. I think that’s why I go out of my way to make sure the fans know how much I appreciate them allowing me to do this. I remember what it was like having no idea where rent was coming from, and I don’t miss that feeling at all.

The importance of surrounding yourself with people that believe in your songs as much as you do. I’m really lucky to have a manager, agent, publicist, and band that share my vision. It hasn’t always been that way, but I didn’t know any better. Over the years I have learned that the people you surround yourself with are just as important, if not more important, than the thing you are selling. Again, I’m lucky to be surrounded by positive people that believe in my songs as much as I do. If you don’t take shortcuts or settle, you can go a lot further with a good team at your side.

On American Aquarium’s new album Lamentations, Barham shines light on dark American corners with heartbreaking conversations, long looks in the mirror, and empathetic questions, all through songwriting that is clear without sacrificing its poetry, and direct without losing its humanity.

Connect with Barham online and on the road.