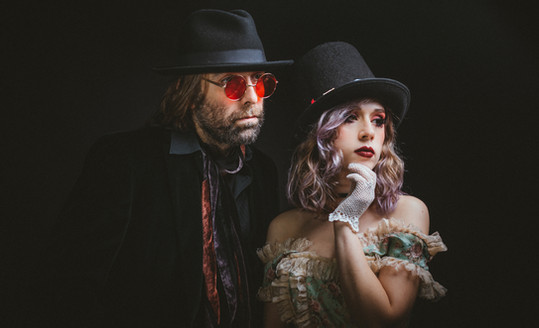 Irakli: It’s a 2002 Honda CRV. 170K miles on it, but it hasn’t seen much touring action lately, sadly, due all that’s been happening with the pandemic. Radiator, power steering, starter had to be replaced…

We had some “fun” in Virginia once, when the starter gave up, but luckily there were kind and skillful strangers at hand who knew how to bang it with a hammer and get the car started again. We didn’t turn off the engine all the way back to Nashville. I would not recommend it. But thank you, kind people of Virgina.

Anana: We love making sandwiches and taking a cooler with us. House concerts are great usually because you get fed, and some venues offer food as well. That’s always great. Part of the fun is exploring local eateries, wherever we may be, coffee shops, BBQ joints. There’s always a more boring but healthy option of going to a supermarket to stock up in bigger towns.

Irakli: It seems like it’s always the G string, isn’t it? Why? Maybe someone can enlighten me. Even if you don’t break them, it’s still a good idea to replace them every few weeks or months! Although that’s about one of my least favorite things to do. I tried Elixir strings which last longer but cost more, about 15 bucks for a set. But recently went back to D’Addarios, they sound better to me, although wear out quicker. About 8 bucks for a set I think.

Irakli: These days it’s our house. There’s a cat and a dog. The cat especially loves ballads, and acoustic guitars. If he starts rolling around on the floor, we feel like we’re doing something right. Of course, there’s a chance we may be gravely mistaken. Never a dull day with cats. The dog is rather indifferent in her old age and wisdom.

Anana: “In another lonely lifetime when I was fragile as a child

Irakli: It was at a rather tiny and nasty place called BMW Bar, in NYC. I don’t think it had anything to do with the car, BMW. I forget what it stood for. But there was always this one guy, I’m not sure what he was on – or what he needed, but he would do a peculiar dance each time, during the 3rd song, no matter what song it was. I took it as a good sign. Foolish move.

Anana: We fell into making music videos some years back since we needed to make one for one of our songs but couldn’t afford to hire anyone else to do it. We were both big film and photography people and having studied it in the past helped us out along the way. The word spread quickly and fast forward, we now have our own video production company called Duende Vision. We’re very grateful to have an artistic “day job” that we love and for the incredible musicians that we’ve gotten a chance to work with throughout the years.

Irakli: Well – it went from zero to not being broke, so that’s something to be grateful for – especially taking into account the video work. With no touring, no house concerts, and a lot less session work than before the pandemic, it’s been pretty tough. The good thing about technology is that we can record from home, so it’s nice when people ask us to overdub something on their records, vocals, keys, guitars…

Irakli: Not to pay attention to all kinds of music business advices and spend a lot more time on actually practicing and playing. Less thinking, the better it is, especially early on.

Meet Anana Kaye, a Nashville based Indie Alt-Americana Duo. Hailing from Georgia, the other one, where Argonauts sailed to steal The Golden Fleece and where wine was invented 8000 years ago, Anana Kaye and Irakli Gabriel deliver a unique sound we rarely experience in such potent doses today. With influences including Kate Bush, Nick Cave, Leonard Cohen, and David Bowie their music is a genre bending musical experience akin to twisting kaleidoscope.

Their first EP, the brilliant, atmospheric Sentient produced by Aaron Nevezie at The Bunker Studio in Brooklyn, came out in 2016, featuring Anana’s voice and her keyboards, along with Irakli’s left-of-center approach to guitar as well as songwriting collaborations with Freddie Stevenson and Mike Scott of The Waterboys. The record shrouds us with themes including purpose, love, death, and consciousness, but with their melodic guidance, the topics are accessible and enjoyable to question.

Their next album Detour was released on August 2nd 2019, diving deeper into the topics that make us human in the chaotic world around us, exploring themes of alienation and depression with an intensity from the couple’s spellbinding music married to imaginative lyrics about being kicked down and picking yourself up enough times to have an attitude about it.

Whispers And Sighs, to be released on 19 March, is a collaboration between Kaye, Gabriel, and the late David Olney. The album, Olney’s last studio recording, offers a unique, sonic landscape that blends the haunting sensuality of European music with the raw intimacy of Americana, weaving raucous, unapologetic rock anthems like “Lie to Me, Angel” and “Last Days of Rome” with sparse, introspective ballads such as “Tennessee Moon” and the record’s title track.

Connect with Anana Kaye and Irakli Gabriel online and (eventually) on the road.