On a Clear Night, by Missy Higgins 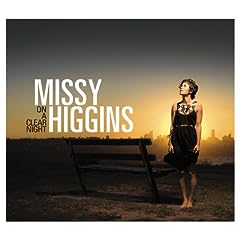 The first thing that you’ll notice about Australia’s Missy Higgins is her stunning voice, a magical blend of confidence and uneasiness. Opening track “Where I Stood” epitomizes this dichotomy. The song captures the moment where a woman realizes that, despite her emotional attachment to her lover, has become too ingrained in the relationship and needs to re-discover her identify. Set against a plaintive piano, Higgins vocals – and her lyrics – perfectly balance the pain of ending the relationship with the determination to stand by the decision. More uplifting but no less engaging is “Steer,” a charming acoustic pop song. It is so refreshing and airy that you can easily imagine yourself cruising in a convertible down a rural highway. From start to finish it is Higgins voice – both lyrical and sung – that makes this such an enchanting release.

THE PLAYLIST:
Be With Me, Foy Vance (from the 2007 Wurdamouth Records release Hope)
Take a touch of blues guitar, put it next to a slow funky groove and top with Vance’s distinctive soulful vocals and you end up with this smokin’ track.

Count to Ten, Tina Dico (from the Defend Music release Count to Ten)
Similar to Ani DiFranco, Tina Dico conveys tremendous confidence in her vocals. An urgent beat underscores Dico’s song about taking a moment to collect oneself and letting that moment put things in perspective. Like a less roots-oriented Ani Difranco, Dico’s confident songwriting and vocals are a powerful force.

I Do, Roger Clyne & the Peacemakers (from the Emma Java Recordings release Turbo Ocho)
For their latest release, Clyne and crew decamped for Mexico and wrote and recorded their entire latest release in eight days. The looseness shows, especially on this track built around an infectious hook and raucous guitars. Here’s to some mighty fine down-home rock and roll!

Into the Mystic, Jason Isbell (from the New West Records ep release Live at the Twist & Shout 11.16.2007)
This is one of two versions of the Van Morrison classic making the rounds (the other is by The Swell Season’s Glen Hansard and Marketa Irglova). Isbell gives it a proper Southern rock shine, letting the electric guitars ring true as he sings “I want to rock your gypsy soul.” My only complaint with this ep release is that it didn’t include Isbell’s rocking “Never Gonna Change,” which was downright incendiary at this point in the tour.

Heaven Inside and Out, Ted Lukas (from the Nine Alarm Records release Misled)
Big jangly guitars guide the way on this power pop gem from Tampa’s Lukas.

Love’s Standin’, Vince Gill (from the MCA Nashville Records release These Days)
I’ve only just begun to scratch the surface of Gill’s 4-cd collection, with each cd comprising a different musical style from rock to bluegrass to honky-tonk to acoustic ballads. I started with “The Rockin’ Record” and immediately latched onto this blissful ode to love. The lyrics can be a bit contrite, but between the euphoric melody and the jubilant horns this song never fails to put a smile on my face.

Thrash Unreal, Against Me! (from the Sire Records release New Wave)
The Gainesville power punkers tell a cautionary tale of a drug-addled woman who has lost too many years as a club denizen where “she can still hear that Rebel Yell just as loud as it was in 1983.” A persistent back-beat keeps the song moving while coarse lead vocals are countered by a catchy group harmonies on the chorus.