Traveling and Unraveling, by Steve Poltz 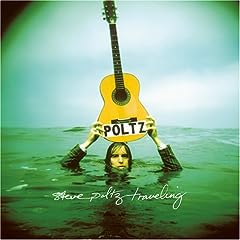 Poltz proves himself to be a genuine musical instigator across two concurrent releases, blending a comedic wit and biting lyrics with instantly hummable acoustic melodies. Who else would react to life’s frustrations by asking the semi-serious question “What would Ghandi do in this situation, go on a hunger strike or a big vacation?” Elsewhere Poltz exposes the heart of a romantic underneath his wicked sense of humor. The bittersweet “Once Again” is an impassioned plea to a former lover to take him back while he declares “a love so true I’m gonna break on through” on the string-laced “Break On Through.” All too often simultaneous releases result in two albums of mediocrity (remember G&R’s Use Your Illusion 1 & 2?, anyone), but Poltz mines pockets of gold across Traveling and Unraveling. [Note that Unraveling is only available at live shows.]

THE PLAYLIST:
Who You Are, American Music Club (from the Merge Records release The Golden Age)
AMC’s Mark Eitzel is among rock’s most introspective writers, quietly exploring his feelings and reflecting on the emotions of those around him. This elegant opening track from their latest release finds Eitzel pleading to a lover to commit to the relationship, “you never love when you never trust, it’s hard to love when you only see the dust.”

Real Long Distance, Josh Ritter (from the Sony Records limited edition release Live at the 9:30 Club)
A limited edition release from National Independent Record Store Day, we’ve got NPR to thank for recording this stellar show. Although a short eight tracks, it perfectly captures the energy and enthusiasm of Josh and band in concert. This track stands out for the intensity of Ritter’s vocals and the brilliant cacophony of the band’s performance.

I Make the Dough, You Get the Glory, Kathleen Edwards ((from the Zoe Records Release Asking for Flowers)
Edwards has a sweet airy voice that belies the sarcasm in her lyrics. Case in point, “You’re cool and cred like Fogerty; I’m Elvis Presley in the 70’s.” Regardless, the gentle ambling melody of this twang-filled gem is perfect for a lazy Sunday afternoon.

Every Fucking City, Paul Kelly (from Paul Kelly A-Z Downloads)
Kelly chronicles a couple’s vacation break-up and the protagonist’s subsequent sullen European wanderings until he finally declares that “every fucking city looks the same.”
Now I’m in a bar in Copenhagen, trying hard to forget your name, and I’m staring at the label on a bottle of cerveza, and every fucking city feels the same.” [Selections from A-Z Downloads are available at Kelly’s web site. A new “letter” is posted each month.]

When Yer Sad, Tim Rogers (from the Ruby Q Records release The Luxury of Hysteria)
On his frequent solo releases, You Am I’s Rogers leaves the guitar fury but not the songwriting chops behind. This is perhaps the most rock-oriented track on his latest release which finds strings and horns accompanying Roger’s (mostly) acoustic guitar. The melancholy oozes from the lyrics and Roger’s restless yet driving melody.

The Cheapest Key, Kathleen Edwards (from the Zoe Records Release Asking for Flowers)
“A is for all the times I bit my tongue; B is for bullshit and you fed me some; C is for charity and now you’re mine; D is for dollars but you’re counting dimes…” A classic opening line.