WHAT’S IN A NAME?

The running joke all week was how to define Americana. The context was typically in light of Merriam-Webster having recently added the term to their dictionary. “Look it up,” was the oft-proffered response that was even featured on the event t-shirt. The reality, though, is that it is a challenge to define a music genre that touches so many other types of music. The Conference and Festival did little to resolve this question, bringing together a group of artists as diverse as they were talented. From a Muscle Shouls R&B tribute to country gentlemen Marty Stuart, from the Mexican folk stylings of the David Wax Museum to the rock of Will Hoge, well, you get the picture.

The answer came to me on the final night while listening to James McMurtry play “Levelland.” Here was a song heartfelt and honest, tackling real subjects yet with a winsome melody that was engaging enough to transcend the lyrics.

Americana isn’t about the style of music, per se, it is about musical story-telling in the finest American tradition. It documents colorful characters dealing with the curveballs that come their way, chronicling how they sometimes succeed and sometimes take it on the chin. It is about musical integrity and commitment to the song.

That, for me, is Americana.

PANELS: STORIES, INSIGHTS AND LAUGHTER
One of the pleasant surprises was a collection of informative and entertaining panels each day. The panels explored topics both musical and economic, with a typically eclectic group of industry professionals offering their perspectives.

Among those I attended was a panel on songwriting featuring John Oates (yes, that one), Jim Lauderdale, Angel Snow and Matraca Berg. They had an interesting discussion on co-writing. Oates, no stranger to the topic, talked about how the experience is as much about trust between collaborators as it is about writing an actual song.

A discussion of fan-funding (a la Kickstarter) was as much about the intangible benefits as it was about the dollars. One of the panelists remarked that one of the great benefits of the model was that it has helped artists learn how to interact with their fans.

A panel on artist development centered on the Civil Wars, with the duo’s Joy Williams and John Paul White joined by their extended business team. It was fascinating to hear from the full team as they described their methodical approach to building the Civil Wars’ commercial success while staying true to the artistic vision.

The most entertaining, if not informative, panel was called “Road Warriors: Tales from Life on the Road.” A seasoned group that included legendary road manager Phil Kaufman (of Gram Parsons fame), the Bottle Rockets’ Brian Henneman, Billy Burnette (toured with Fleetwood Mac and Bob Dylan, among others), Amy LeVere and Ian McLagan swapped stories that kept a full room entertained.

The fun started early as each described their time spent on the road. When LaVere stated that she had only been on the road consistently for three years, the rest of the panel, all lifers, affectionately jeered here. It was McLagan who summed it up best when he declared, “there’s nothing special about being on the road. It’s the one or two hours that you get to play that matter most.”

Sure, many folks were there for the official evening showcase performances, but it was hard to step foot around Nashville without seeing music. The first afternoon found Will Kimbrough and Tommy Womack doing an impromptu performance in a hotel lobby space and Steve Forbert performing in an art gallery.

Nashville-based Brite Revolution magazine took over a conference room to record some impressive performances from a range of artists in attendance. I stopped by to catch the Jayhawks as an acoustic duo, sound checking with an impressive cover of “Love Hurts” before the cameras rolled for a performance of “She Walks In So Many Ways,” their latest single. (Download the studio version here). 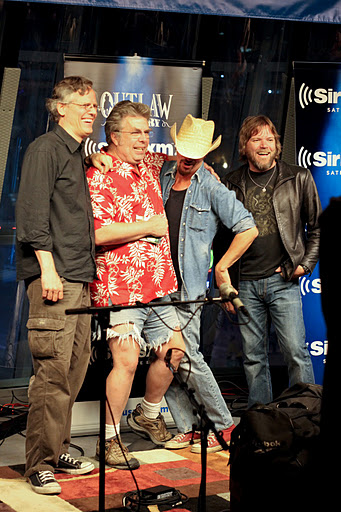 And then there was Mojo Nixon and his program for Sirius XM’s Outlaw Country radio program. Mojo invited the Bottle Rockets, Kenny Vaughan and Luther Dickinson (North Mississippi All-Stars) into the studio for a live performance in front of a small crowd. As one would expect, Mojo’s between song banter was as entertaining as the actual performances.

Nashville’s Broadway is home to many a honky-tonk, so when in Rome… I caught a stand-out set by the Silver Threads on Friday afternoon. Featuring former Bostonians Eileen Rose (voice/acoustic guitar) and Rich Gilbert (electric guitar/pedal steel), the group tore through some country classics that included a knock-out performance of Tammy Wynette’s “Stand By Your Man.”