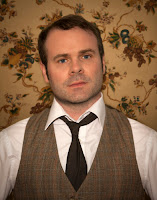 Listening to Mark W. Lennon’s new release Home of the Wheel, I felt as if I was transported back to depression era America without leaving 2011. At times it is the music that takes you there, and other times it is the lyrics. Lennon draws the parallels between the Modern and the past with a wide brush of Americana. There are influences from traditional styles and contemporary songwriters like Ryan Adams. In between you will find Country and even some Jam Band riffs. All of these diverse ingredients may sound like a case of creative schizophrenia, and in some hands that would be the case. However, Lennon keeps his many influences contained within his own singular vision. That is no small task, and the result is a compelling sound that will likely end up in many listeners heavy rotations. Fans of Chattam County Line, the Avett Brothers or Steel Wheels will definitely enjoy Home of the Wheel.

The album was produced by Marvin Etzioni, a former member of Lone Justice who has worked with Steve Earle, Counting Crows and Lucinda Williams. Lennon is a North Carolina native but he now resides in California. In the title cut, Lennon gives a powerful portrait of life in post-depression America, and the desperation of the time. Other songs on the album are modern in there setting, but the parallel between then and now is clear. “Blues Forever (in Your Eyes)” is simply one of best songs I have heard this year. A Country tune “California Calling”, presumably refers to his own move to California. The move has been a good one for him, at least musically. His sound is now complete and he is establishing himself as a rising star in the roots music community of the area. Look for the buzz to get louder on future releases. Mark W. Lennon’s music needs to be heard.

“Blues Forever (in Your Eyes)”