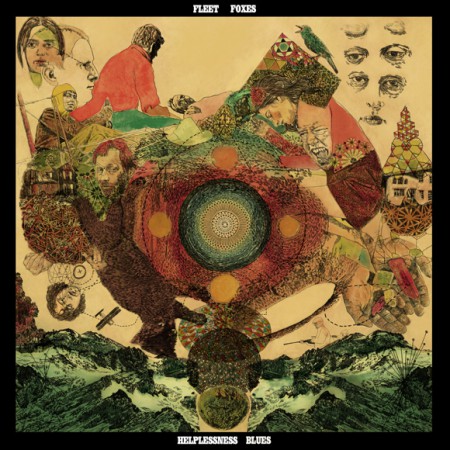 Let’s get this much out of the way: Everyone’s right about the new Fleet Foxes album, Helplessness Blues (Sub Pop). It’s astonishing.

Sorry. It’s a safe bet that many out there were hoping the gentle, bearded, harmonizing folkies form the Northwest would fall flat on their nature loving faces. But, alas, they stand triumphantly, even more so than they did after beautifully signaling their arrival a couple of years ago with their debut LP.

We’re not sure that we’re going to say anything here that hasn’t been said in a million other areas, but still, Robin Pecknold and crew have yet again made harmonic, English-style folk so darn accessible. And in the cases of the title track and the album closing “Grown Ocean,” they’ve made it sweeping and anthemic, a feat that fellow, critically lauded retro-folk rockers Midlake weren’t able to accomplish last year when they hit the critical and commercial skids of ambivalence with their impressive, but far-too-cumbersome-for-mass-consumption, The Courage of Others.

The opening lyrics of the title track are simple, but profoundly telling. “I was raised up believing I was somehow unique” is shortly followed by “And now after some thinking, I’d say I would rather be a functioning cog in some great machinery serving something beyond me.”

Such sentiment suggests this is an album of growth, regardless of whether the sound itself has progressed or not. The sound is still lush and pastoral, and Pecknold’s penetrating voice still resonantes in a way that soars naturally above the arrangements, as if to imitate one of the snowflakes he sings about in the title track. But the overall product is quite a bit more mature.

Perhaps some experimentantion with electronica, or moving into a more striaght-forward rock direction lie just beyond the horizon for this group, who knows, it wouldn’t be the first time an buzzed-about indie group flexed their mercurial muscle to bug their label bosses. But by building upon their current strengths – the very ones that made so many look forward to this new album in the first place – the band showcased a great deal of restrained maturity by sticking to their sonic guns without vaulting themselves into self-indulgent, or self-parodying terrain.