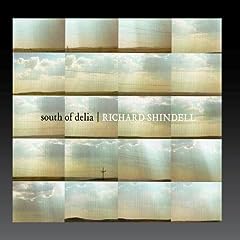 You’ve heard of the “Six Degrees of Kevin Bacon?” I prefer the “Six Degrees of Richard Thompson.” As a nascent Folk-Rock fan, I took a gamble on a little album called Shoot Out the Lights, and the floodgates opened. From producer Joe Boyd, I followed a breadcrumb trail to Fairport Convention, then to Sandy Denny, Nick Drake, June Tabor, Steelye Span and anything else I could find on Boyd’s Hannibal label. That one album cost me a small fortune…and enriched me at the same time.

Imagine listening to Tom Rush’s Circle Game in 1968 and gleaning the coming greatness of Joni Mitchell, Jackson Browne and James Taylor. Richard Shindell’s new album of remakes, South of Delia, is that kind of album — a windfall of suggested listening for a shameless musical piggybacker (like me).

As one-third of the Folk “supergroup” Cry Cry Cy (with Dar Williams and Lucy Kaplansky), Richard Shindell showed a knack for unearthing anonymous gems. For that project, he enlightened us with James Keelaghan’s exquisite “Cold Missouri Waters” and Cliff Eberhardt’s “Memphis.”

South of Delia builds on that promise with twelve more borrowed compositions that cover the full chronology of Roots music from pioneers like Woody Guthrie and the Carter Family to contemporaries Josh Ritter and Jeffrey Focault. The twelve songs are from six different decades, but Shindell’s breezy, acoustic style provides a sonic blend that makes them all flow.

Shindell describes the collection as “twelve songs that belong together.” It’s true; the lyrics share remarkably similar traits. The songs are rife with tales of weary characters in motion: drifters, refugees, hunters, soldiers and soul searchers.

“Acadian Driftwood,” Robbie Robertson’s account of the 1755 expulsion of French settlers from Nova Scotia, provides an energetic opening. Deportee (Plane Wreck at Los Gatos) is another song about displacement, this time with a solemn but penetrating tone. Written by Woody Guthrie about the indifferent treatment of Mexican immigrants, the words are 60 years old but could have been written yesterday. Eliza Gilkyson contributes a pretty harmony on this one.

Other renowned songwriters are represented on South of Delia, but Shindell’s selections from their catalogs are surprising. Of all the Springsteen songs to cover, “Born in the U.S.A.” seems an unlikely choice, but Shindell’s subdued reading brings out the best in this misunderstood lyric. He segues that with, of all things, a Peter Gabriel song! But “Mercy Street” is another winner, aided by Lucy Kaplansky’s yearning vocal. He also smartly revives Bob Dylan’s “Señor (Tales of Yankee Power),” an overlooked nugget buried on the maligned Street Legal LP.

The best cuts, though, come from the least heralded artists. Newcomers Josh Ritter and Jeffrey Foucault contribute two mature-beyond-years songs in “Lawrence, KS” and “Northbound 35” — thoughtful compositions that speak highly of the current crop of singer-songwriters. “The Humpback Whale” is even more memorable; it was originally “popularized” by Nic Jones on his cult classic, Penguin Eggs, voted the 2nd best folk album of all time by BBC radio listeners.

By the way, Richard Shindell is, himself, an accomplished songwriter, with five albums of original material to his credit. His debut, Sparrows Point, is well worth checking out for fans of contemporary Folk, and his live album, Courier, is a tidy career summary. Both include his signature, “Are You Happy Now,” a Halloween breakup song in which the departing lover flees with the toaster, the “spices from the rack,” and, yes, the Halloween candy.