It’s hard to beat a warm, sunny summer day, outside with a cold beer, some BBQ, and bluegrass in the MP3 player. It’s Labor Day as I’m writing this and I scored big in the music side of that equation as I’m reviewing the last effort from The Rubber Knife Gang, Drivin’ On. I just can’t keep from tapping my foot and snapping my fingers. In the spirit of The Infamous Stringdusters or Old Crow Medicine Show, The Rubber Knife Gang has that neo-traditional bluegrass thing going on with tasty instrumentals and harmonies that owe less to the high lonesome sound than to mainstream folk or country. 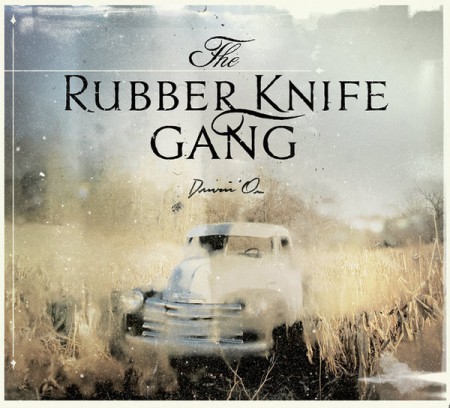 The album opens with the title track, a road-trip-to-see-my-baby tune featuring Todd Wilson on mandolin. In the next song, She’s My Only One, John Oaks’ banjo playing catches more of the limelight, and a couple of tracks later it’s the third member of the trio’s turn, Hank Becker, to shine with his guitar picking on Tennessee Mountain Girl. The record continues with all three members singing and showcasing their instrumental chops. Writing is attributed to the band at large, except for a version of the Billy Joel number, Travelin’ Prayer. I make note of that because a few songs here, Drink Up John and Let Her Down Slow in particular, have an immediate familiarity that give you a sense of musical deja vu.

Despite their skill, these guys don’t take themselves too seriously. First, there’s the obvious reference to being as sharp as a rubber knife. Then there are some of the lyrical winks, like “I knew she was a winner when she served me dinner”, from Tennessee Mountain Girl. Or, “I quit my job last week when they tested my pee”, from Praise the Lord, Pass the Weed. And the track A Moment of Silence that is 31 seconds of, you guessed it, nothing.

Overall, Drivin’ On is a tight studio effort that captures the essence of a live band that can finish each other’s sentences. It strikes you as a record you’ve been listening to for years even before you finish the first pass. I wish this had come out closer to Memorial Day than Labor Day as it would have stayed in my CD changer all summer.