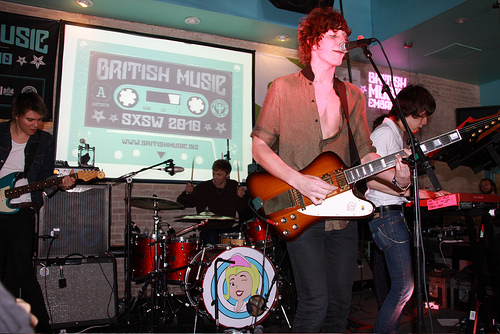 One Night Only perform at the Yorkshire Party

Of the 15 bands I saw on Wednesday at SXSW this year, the one that stood head and shoulders above the rest was One Night Only from Yorkshire, England. I’ve had their debut album for a couple of years now, and like it quite a bit, but the band that I saw onstage for the first time at South-by came across as almost an entirely different band, one with a much bigger sound; a sound that represented a sensational blend of power pop and Britpop. Though they did include my personal favorite song from their debut album, “Just for Tonight,” most of their set focused on their forthcoming sophomore effort. At their Wednesday night showcase, One Night Only featured many elements of a pure power pop band, with lean guitar lines, ringing power chords, spot-on drumming with effortless fills… heck, they only really lacked harmony vocals to complete the power pop picture. Combined with those power pop elements, and with an injection of Britpop bombast added to sound, songs like “Just for Tonight” were epic in their live performances, with the new material sounding equally strong.


Noting that this was just their second gig in a year, frontman George Craig remarked with a charmingly humble and almost apologetic air, “we’re just getting warmed up, this is a special time for us being here … [it’s] lovely.” If what I saw on Wednesday night was One Night Only just getting warmed up, I figured they must burn absolutely white-hot once they’ve been forged in the fires of the road. At the end of the set, George mentioned that they would be playing the Yorkshire party at the British Music Embassy the next day, inviting the audience by saying, “if you fancy a giggle, come on down.”

As it happened, I had already planned on attending the Yorkshire party, as the Crookes, one of the other bands I was most excited to see this year (based on “Chorus of Fools,” the ultra-snappy mp3 they provided for streaming on their official SXSW page) were also on the bill for the party. Since set times for the party hadn’t been announced in advance, I managed to wake up on Thursday in time to walk in the doors at the crack of noon, the scheduled start-time of the party, and was greeted by a lovely buffet of authentic Yorkshire cuisine. I had a sneaking suspicion that I might end up staying for the full 3-hour affair since I had a feeling that One Night Only would be headlining the show, and I didn’t think I could resist the urge to help myself to a rare-for-me South-by serving of seconds.

As it turned out, I did end up staying for the entirety of the 3-hour cruise through Yorkshire’s music scene which, in addition to the aforementioned bands, also included winning sets from Middleman, Slow Club, and Grammatics, but it was the Crookes who ended up stealing the show for me. 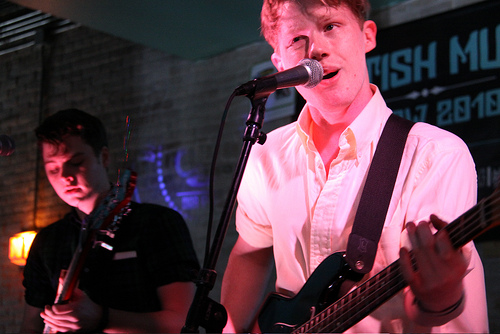 The Crookes perform at the Yorkshire Party at SXSW, 3/18/10

Much as I liked the Crookes’ “Chorus of Fools” (and I liked it a lot), it ended up being my third or fourth favorite of the songs they played in their six-song set; that’s how good they were. I love it when that happens. The Crookes are a band with such a refreshingly original sound, a sound which I would liken to a heaven-sent marriage of vaguely surfy guitar sounds and vaguely doo wop-inspired vocals combining for a bright, poppy sound, that’s just, well, snappy. A friend described their sound as, “Buddy Holly meets Vampire Weekend,” and there’s something to that as well. If either of those descriptions sounds even remotely pleasing to you, friends, I implore you, check this band out. You’ll be glad you did, even the Vampire Weekend haters out there. (Surely there’s no such thing as a Buddy Holly hater out there, so I needn’t even address such a sad bastard of a mythical creature, right?)

By the time they had concluded their set, having turned off their amps and wading out onto the center of the club’s floor, forming a circle and, with their four voices accompanied by a single unplugged acoustic guitar performed their final number in the middle of the audience, it was clear to me that the Crookes are something special. The Crookes are also something rare: a band with an original sound and a captivating live show, all dressed up in a clean-cut retro look which eschews the indie rock staples of jeans and t-shirts for a retro-fabulous look including tucked in button-down shirts, rolled up shirtsleeves, and pleated trousers. If you’re anything like me, the Crookes’ music will have you breaking out in goosebumps and rooting for the band’s success.

Following on the heels of One Night Only’s best-set-of-Wednesday, and having just seen the Crookes perform what was immediately the one to beat for title of my best-set-of-Thursday, I was proclaiming to friends that, “Yorkshire is ruling my South-by!”

And I still had another One Night Only set coming up at the Yorkshire party. Incredibly, with just that one more show from the previous night under their belts, when One Night Only took the stage to headline at what essentially amounted to sovereign soil at the Yorkshire party, many of the power pop elements, as well as the somewhat tentative between-songs stage presence from the night before had been replaced by a band that had been fired in the forge of a South-by showcase. The One Night Only of Thursday afternoon at the Yorkshire party had seemingly transformed into arena-ready rockers, with all of the onstage confidence and propulsive, anthemic sound that arena rock entails. I found myself missing the power pop notes that had been so prevalent the night before, but they undeniably rocked the house as if they were on a mission. Mission accomplished, lads.

There was so much competition for the South-by attendee’s attention at day parties this year, with what seemed to me like a record number of events, and a record number of them featured equally killer lineups of bands. Having said that, the Yorkshire party unquestionably gets my vote for party of the year this year. Not only was this event, which again took place at Latitude 30 (aka the “British Music Embassy”), the best party I attended at this year’s South-by, but it was also the only party I was there for from start to finish. The bands were righteous, with two of my absolute favorites from the week on one bill, and the full open bar and buffet of yummy Yorkshire food provided by our host, Chocolate Fireguard and party sponsor NorthernNet, made for a truly unforgettable afternoon in Austin.

Cheers, Yorkshire! Say, is it too early to RSVP for next year’s party?

Twangville gratefully acknowledges Debby Fulgoni and Chocolate Fireguard for the use of their photos.