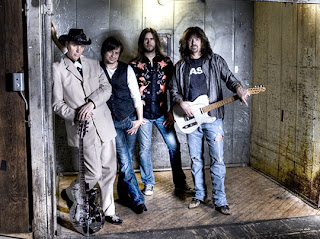 For all of you youngsters out there who love the history of alt-country, the first fact to know is that Uncle Tupelo started it all. Wrong Answer!!!! Before there was something called alt-country, there were many in the field. Rank & File (an early Alejandro Escovedo project), X was heavily roots influenced, The Blasters just to name a few. However, in my mind (which was clouded with Beer during this period) there is one band who created what later became alt-country. At the time it was referred to as Cow-Punk. Who cares what it was called then or now, Jason & the Scorchers fused Country with Rock in a way nobody had before. Jason was the panache and the voice and Warner Hodges raging guitar licks were the soul. Everyone who came to see them had kickin’ party they could almost remember. The energy in a Scorchers show could power a third world country.

My life changed in 1984 when I first heard Lost and Found. They dominated the college bar scene of the 80s. They began to grow in popularity and even played with Dylan. However, label troubles, sickness and rehab (the big three for all rock bands) eventually put them on hiatus. However, with the success of the alt-country sound, which they basically created, they came back with an excellent album A Blazing Grace in 1993.

Fast forward to 2010, two years after receiving a lifetime achievement award from the AMA, they release Halcyon Days. It is their first new release in almost 15 years. Guess what folks? They’ve still got it. It is a more mature sound but still has everything you would expect of the Scorchers. So go out and get yourself a history lesson. It appears they intend to finish what they started.