The Day After Everything Changed, by Ellis Paul 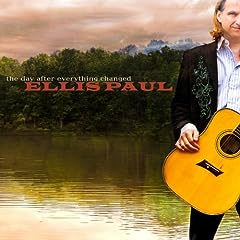 New England folk musician Ellis Paul headed south to Nashville to record his latest album and returned with a more polished sound. Despite the change of locale, however, the vividness of his songwriting remains the same. Paul’s songs are filled with rich imagery and colorful characters, beautifully complemented by his expressive voice.

“Hurricane Angel” tells the tale of a New Orleans man searching for salvation, both spiritual and economic, after Hurricane Katrina. “You can drown New Orleans but you can’t drown the blues,” he sings, “so bartender pour away.”

Love is a recurring theme, from the young courtship of “Once Upon a Summertime” to the infectious “Heaven’s Wherever You Are.” “I know this ‘bout the Blues, it only prints the bad news while ignoring the miracles,” he declares on the latter song, “so I stand and applaud with Buddha, Krishna and God ‘cause all this beauty’s hysterical.”

Album closer “Nothing Left to Take” finds Paul returning to his powerful folk roots. Accompanied only by his acoustic guitar, he chronicles a man in the hours after his lover leaves him. “There’s healing time, killing time, time will take its time,” he reflects before concluding, “and its only crime is what you let it steal from you.”

Although more known for her country leanings, Allison Moorer showcases her range with an album of modern standards. The thirteen songs on Crows have a timeless quality to them, rendered even more compelling by the plush musical accompaniment. “Should I Be Concerned” is a classic torch song, slowly building from a quiet piano introduction to a string-laced peak before an electric guitar breaks into an expressive solo. “Sorrow (Don’t Come Around)” finds Moorer firmly defiant, “you’ve worn out your welcome so just walk on past this house, you ain’t getting in here and I ain’t coming out.” “Just Another Fool” strikes a similar chord, albeit with a slightly more upbeat swagger. “The Broken Girl,” a personal favorite, shimmers with a 1960’s girl group vibe, right down to the sing-along “la la” chorus. The album’s focal point, however, is Moorer’s voice. Always commanding, yet never overwhelming.

The Natural State, Glossary (from the Liberty & Lament Records release Feral Fire)
If you miss John and Exene’s paired vocals from the heyday of X, look no further than Glossary. The Murfreesboro, Tennessee quintet marries gritty Southern rock with just the right amount of punk ethic. Throw in some ardent vocals from husband and wife Joey and Kelly Kneiser and you’ve got one raucous song. (See Eli’s full review here.)

Don’t Fall In Love With a Lonely Girl, Freedy Johnston (from the Bar None Records release Rain On the City)
Johnston is a master storyteller, weaving rich characters studies against generally acoustic-based melodies. This one cranks it up a notch with electric guitar while maintaining the lyrical integrity for which Johnston is known. (See Jeff’s full review here.)

Crave and Wonder, Arc Angels (from the self-released Living in a Dream)
They shunned the “supergroup” label but the musical sparks flew when Chris Layton and Tommy Shannon, the late Stevie Ray Vaughan’s longtime rhythm section, joined up with young Austin guitar-slingers CharlieSexton and Doyle Bramhall II. The group disbanded after a single 1992 release but recently reunited (minus Shannon) to record a fiery live album. This track, a new song from Sexton, fits nicely with their earlier release – loud and soulful.

History Lesson, Motion City Soundtrack (from the Columbia Records release My Dinosaur Life)
What a tease. This song begins with a strummed acoustic guitar before exploding into a bombastic electric guitar-driven sing-along. Power pop gold as it is meant to be played… loud.

Trash Day, Butch Walker (from the One Haven Records release I Liked It Better When You Had No Heart)
LA by way of Atlanta singer-songwriter Butch Walker packs his latest release with easy-going Southern California pop gems. This is the standout of the bunch. (With bonus points for a great album title…)

Please Don’t Come Around, Tommy Keene (from the Second Motion Records release In the Late Bright)
For over 25 years Keene has mined the intelligent side of power pop. This track from his latest is no exception. The crunchy guitars and saccharine melody line will draw you in before a post-chorus guitar explosion sends you reeling.

Radio Radio, Elvis Costello (from the Hip-O Records release Live At Hollywood High/The Costello Show Vol. 2)
Costello has become quite the musical chameleon over the years, shifting from rock to jazz to country and beyond. This track from a just released 1978 live performance is a joyous reminder of the fiery intensity of his early years.

FROM THE ARCHIVES
Will You Ever Understand, Swinging Steaks (from the Thrust Records release Suicide at the Wishing Well)
Every once in awhile my iPod pulls out a long lost gem from the archives, like this rowdy piece of rock and roll from the Boston-based Swinging Steaks. Hey Rascal Flatts, are you listening? This could be your next hit single.