Everyone has their favorite suit or set of clothes.  You wear them and somehow your confidence goes up a notch and invariably the day goes better.  For Jeff Johnston, that apparel turned about to be his musical identity.  After trying other styles for a few years he decided to embrace his heritage and upbringing in Austin, Texas.  That led him to create an homage to the music of the 70’s that contributed to the vibe that made Austin the “live music capital of the world.”  The album is called Undiscovered County and Johnston has enlisted some of Austin’s finest musicians to help with the project.

There are a number of musical styles on the record, but several fall into a sort of rockabilly beat.  Things Are Looking’ Up features Redd Volkaert on guitar and T. Jarrod Bonta on piano in a Jerry Lee Lewis style number.  Drinkin’ Cheatin’ Cussin’ & Fightin’ also features Volkaert and Lisa Pankratz’ driving drums in a scoot over to honky tonk.  Add a swing beat and you have You And Your Sister, Too where Johnston sings a light-hearted ditty where “I’m in love with you and your sister, too.”  The last song on the CD is Buck You, an alliteration to a rant about how the songwriter feels about complainers.

Some fine country songs made their way onto the album, too.  Whiskey Under the Bridge is a country shuffle featuring Rich Brotherton on guitar and Warren Hood on fiddle.  Brotherton does some slide work on Wild Eyes, with it’s pop leaning sound.  True Blue has that classic walking bass line.  El Toro uses the Tosca String Quartet to add some sophistication to a story that’s basically just a drunkard imagining his life’s glory by way of the mechanical bull in his local watering hole. 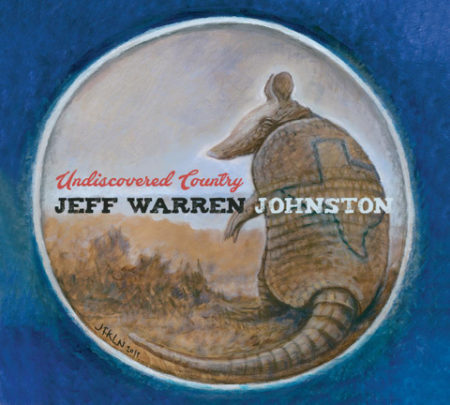 There are a number of musical angles I could use to talk about Undiscovered County, but at the end of the day it’s most endearing feature is that it’s just a lot of fun.  Johnston has found a groove that fits him, and you can hear that in the record.  So listen and enjoy.