Kris Kristofferson famously wrote that “freedom’s just another word for nothing left to lose.”  Kristen Grainger, lead singer & songwriter for True North, writes a corollary, “you call it leaving, but she calls it freedom”, on One Way Ticket, the opening track on their latest album.  While Me And Bobby McGee was about the journey and resulting angst of a young drifter, the songs on Open Road, Broken Heart reflect a more complicated set of worries that echo the angst in our current political and civil societal discourse.

I’m Gone is a nice bluegrass number that’s commentary on splitting up where “you take the house, I’ll take the truck.”  Sunday Night Blues is a folk ballad that observes “it’s so hard being grownup enough to lose the Sunday night blues.”  In an ode to place we should all have in our neighborhood, Dark Horse Bar & Grill “has a special vault, for storing things that aren’t your fault.”

Several of the songs on the record take a more wry approach, like Mighty Bourbon, with its vocal harmonies from Grainger and guitarist Dan Wetzel, about some of the faces of temptation.  The harmonies on Ratio Of Angels To Demons are even better, where Grainger notes “you play scissors, fate it plays rock.”  They also do a cover of a Fred Eaglesmith song, Wilder Than Her, about the attraction of someone who’s even more of something than you are. 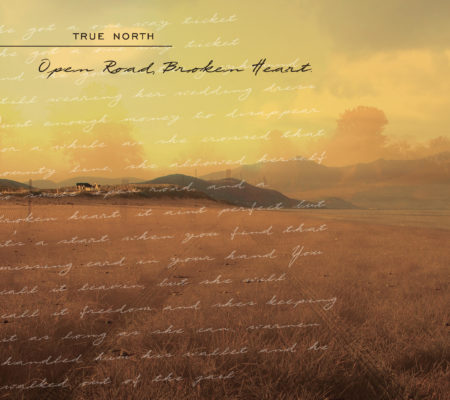 Whereas the previous album from True North, Elsebound, leaned heavily toward bluegrass, most of the songs on Open Road, Broken Heart have more of a modern folk sound and beat.  The harmonies of Grainger and Wetzel really shine.  The bluegrass tunes that are included serve to keep things a little more airy than the song topics might normally drive.  The result is a record that’s both complicated and listenable.  Perfect for being stuck inside on a long winter day.