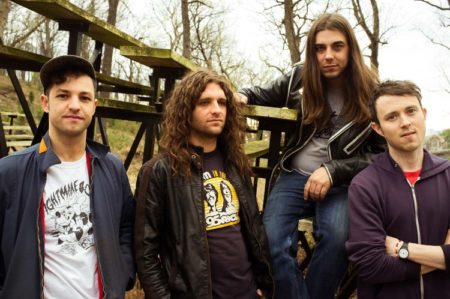 There is only one way to listen to a Lee Bains III and the Glory Fires album…. LOUD!!! Don’t worry about disturbing the neighbors. Just crank it up and wake up the whole neighborhood. On their new album, Youth Detention, the band combines their power chord driven Southern Rock and Blues influences with a Punk defiance. The targets of their wrath are cultural hierarchy and bigotry. These days everyone is disillusioned and angry, so an album full of angst in and of itself is nothing special. There is so much reactionary anger everywhere in the current American social landscape that we are retweeting ourselves into diminishing returns. However, this group of songs is fresh and invigorating. It is clear that the band has thoughtfully wrestled with their particular cultural surroundings, but they don’t resort to preaching. The band chooses to unleash their rejoinders to society in 17 machine gun blasts, most of which clock in around three minutes. Lee Bains hails from Birmingham, Alabama and Youth Detention is clearly a reflection of his wrestling with the racial issues and the unofficial caste system the South is struggling to dismantle. I find his sharp observations evocative of my own experience, since I also live in the Birmingham area and grew up in Alabama.

The songs on this album may wrestle with weighty issues, but they are pure unspoiled fun. From beginning to end, with only a couple of exceptions, these songs move at break neck speed. The ones that don’t like “Picture of a Man” are needed detours that allow you to catch a breath. The album starts with “Breaking it Down!” a rock song reminiscent of their previous work. The punk rock gets thrown in on the following track, “Sweet Disorder!”, in which you can clearly hear The Clash, Stiff Little Fingers and even some mod influence of The Jam. The lyrics are delivered with Bains distinctive raspy Soul drenched vocals and shouts. A lot of bands are mixing the Southern Rock sound with Soul these days. However, they are tweaking it up with Punk influences in ways that deserve notice. “Underneath the Sheets” is infused with the dissonance of Husker Du. Even with the mix of musical styles the Southern idiom is never lost in these songs. For example, “Crooked Letter” uses an old children’s rhyme used to teach kids how to spell Mississippi. (Since my teachers used it, I guess that means I am old.).

This was an ambitious undertaking for Lee Bains III and the Glory Fires, but these 17 tunes delivered at mach speed are a masterpiece.