On various patches of land continuously testing the boundaries of wet and dry in the sea level portions of southeast Texas, southwest Mississippi and southern Louisiana live a breed of men thriving on the margins of humanity.  For a 2 week stretch they manage to semi-control their impulses enough to be trusted by others of their ilk on oil platforms where 14 consecutive 12-hour shifts mock the definition of “safety”.  That’s followed by a couple of weeks of debauchery and pillage excessive enough to make Caligula and Attila the Hun blush.  Both parts of the cycle contribute to years upon years of living every day as your last.  Raised around that hyper-elevated combination of hard work and hard partying, Kevin Russell has applied the ethos to music.

On his latest Shinyribs record, Okra Candy, the first impression I got was “where did those horns come from?”  It’s not like he’s never used any brass or reeds before, but they’re very front-and-center here.  Pack-It-Right starts the disk with a bluesy number with those horns and a sweet Muscle Shoals-sounding electric organ.  Baby What’s Wrong punctuates a classic Russell lyrically-ironic composition with well timed pops of trumpet.  Upsetter takes that a step further and could be an English Beat song from the 80’s.

As usual, there are several numbers that have Russell’s flair for lyrical pictures.  Donut Taco Palace is undoubtedly an amalgam of East Austin eateries, but it also just might be the latest hipster food truck.  The aforementioned Pack-It-Right laments the “same old bourgeois bullshit always killing the spark.”   Red Quasar is filled with fun analogies “like a disco ball in a new gay bar.”  Feels Like Rain takes a more somber tone and reminds you the band can tackle any sound they desire. 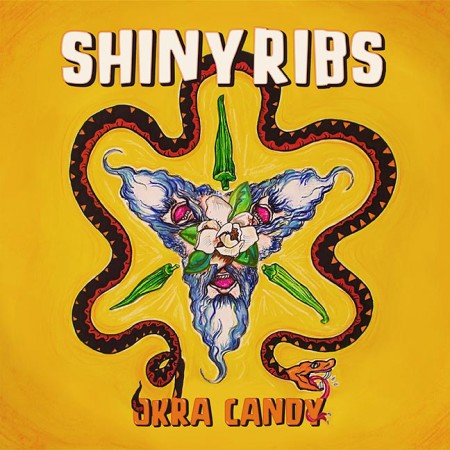 As perhaps the best live show in Austin, if not America, these days, it’s hard not to think of Shinyribs in a single dimension. But as Okra Candy demonstrates, they can go in any direction they please and still deliver the foot-tapping, finger-snapping, chair-dancing music everyone expects.  If you’re new to Shinyribs, Okra Candy is a great introduction to hear what the fuss is all about.