Down To Believing, by Allison Moorer 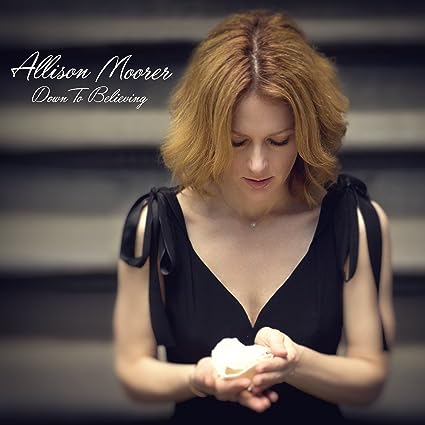 Real life is often the best inspiration for art, notably when it is created in response to heartache and sorrow. Such is the case for Allison Moorer, who channels her emotions into a collection of songs that is by turns sad, angry, regretful and defiant.

Down To Believing starts strong with Moorer standing her ground on “Like It Used to Be.” Don’t want to say goodbye but it’ll set me free,” she sings as an electric guitar wails, “ain’t never gonna be like it used to be.”

Things get darker in “Thunderstorm/Hurricane.” A strummed guitar may open the song but things build quickly into an intense fervor driven by an angry electric guitar and ominous strings. “Let it pour over me, holy water make me clean,” pleads Moorer before declaring, “Everything is washed away, a thunderstorm a hurricane.”

“Wish I” finds Moorer reflecting on what she might have done differently all the while realizing that the relationship just wasn’t meant to be. “But I guess I ain’t your Cinderella,” she concludes, “and if you don’t want me then I don’t want you back.”

The album’s centerpiece is “If I Were Stronger,” a leading candidate for song of the year. Moorer reaches deep to capture the anguish and emotional exhaustion that lead to the finality of a broken heart. It is painful yet stunningly beautiful.

Moorer’s voice is magical from start to finish. She uses it to pack tremendous emotion into every song, relying on nuance and restraint rather than force. The results are something truly special.

Broad Street, PJ Bond (from the Xtra Mile Recordings/Black Numbers Records release Where Were You?)
Musical troubadour Bond is a new artist for me but I’m damn glad that I found him. His music recalls early Wilco with its folksy storytelling style set to an acoustic-based Americana sound. The songs generally flow with an airy feel although he occasionally turns up the tempo with an indie rock vibe, as he does here. Bond’s vocals are front and center, all the better to enjoy the tales that he tells.

This is the lead-off track to my summer soundtrack, not to mention a lock on my list of fave songs from 2015. Bonus points for unleashing a track that belongs on my Kiss Off playlist.

Every Time It Starts to Rain, Lyal Strickland (from the self-released Balanced on Barbed Wire)

Write what you know, as the old adage goes. Singer-songwriter Lyal Strickland takes it to heart, drawing inspiration from his experience running his family’s cattle farm in rural Buffalo, Missouri. He brings it all to life with gracious melodies and a voice that blends world-weariness with a youthful earnestness.

The songs that make up Balanced on Barbed Wire are rooted in the folk-storytelling tradition yet the arrangements tend more towards acoustic rock or Americana. I’m partial to this song that tackles the tribulations of farm life and finds him lamenting, “you’re gonna get your fill from these Midwest Hoovervilles.”

My Favorite T-Shirt, Michelle Malone (from the release Stronger Than You Think)

It’s great to hear Malone rocking again. Don’t get me wrong, I enjoyed her last release, the stark Acoustic Winter. To these ears, however, Malone is at her finest when she plugs in and rocks out. Malone has a tremendous feel for guitar, coaxing a sound that is as rowdy as it is sincere.

She lets the guitar loose on the bruising kiss-off “My Favorite T-Shirt.” Against that bluesy, riff-heavy backdrop she wails, “just give me back my favorite t-shirt, the one that I bought at the Stones concert.” I’ve no doubt that Mick and Keith would approve of the song (not to mention the t-shirt purchase).

Too Afraid to Love You, Dylan Gardner (from the Warner Brothers Records release Adventures in Real Time)

Every year in advance of SXSW, I pour through all the mp3s posted for showcasing artists. It’s an arduous task but it invariably unearths some great artists who weren’t previously on my radar. Dylan Gardner emerged from this review as a “must sees” and, even better, surpassed expectations with his SXSW performances.

Although he is only 18, Gardner has spent years studying the masters – everyone from the Beatles to Sam Cooke to Brian Wilson. He’s taken the lessons that he’s learned* and translated them into a collection of his own wonderfully infectious pop songs.

Gardner and co-producer John Dragonetti took a craftsman-like approach in the studio, packaging Gardner’s songs with lots of nuanced pop flair. At SXSW, Gardner proved that he and his rhythm section have the chops to bring it live, as well.

The Damnwells ran through the major label machine in the early aughts. It didn’t stick. Half of the quartet soldiered on through a series of excellent independent releases. For this go-around, however, the other half of the original line-up has returned to the fold. Damn if they don’t pick up right where they left off.

Singer-songwriter Alex Dezen has a knack for infectious pop melodies that the band serve up in healthy rock arrangements. The songs tend to focus on break-ups and heartbreak but you’ll be hard-pressed to not find yourself humming along with a big ol’ smile on your face.

While other artists flock to Nashville to pursue musical careers, Prass has followed a slightly different path – she commuted from her Nashville home to Richmond, Virginia to work on her debut album. The results are lush and exquisite. How about a piano flourish here, some tempered horns there and some luxurious strings over there. The centerpiece, though, is Prass. Her silky voice is captivating and her songs are so intoxicatingly sweet that it is easy to miss that they are generally about heartache and loss.