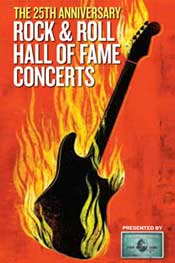 If Night One was about the late night party, night two was about the tributes. Most of the headliners – most notably Metallica and the Jeff Beck Band – mixed a healthy dose of covers into their sets, many with special guests along for the ride.

Similar to Night One, the legendary Jerry Lee Lewis (HoF inaugural class of 1986) opened up the show with a hearty “Great Balls of Fire.” As if to remind the crowd of his bad boy reputation, the 74 year-old kicked over his piano stool then picked it up and threw it down again. The only thing betraying his bad boy persona was his ear-to-ear grin as he walked off the stage.

Aretha Franklin
I wasn’t quite sure what to make of Franklin’s (HoF class of 1987) set. She hit the stage in a formal red gown, fronting a 20-piece band that included a 10-piece horn section. In addition to a couple of hits (“Chain of Fools” with Annie Lennox and “Think” with guest Lenny Kravitz), she played songs ranging from “Make Them Hear You” from the musical “Ragtime” to the New York City “New York, New York.” The latter song was introduced as the New York City “national anthem.”

Jeff Beck
Jeff Beck (classes of 1992, 2009) can play a mean guitar. After opening with a tasteful version of Ray Charles’ “Drown in my Own Tears,” Beck was joined by Sting (class of 2003) on the Curtis Mayfield/Impressions classic “People Get Ready.” Beck later introduced legendary bluesman Buddy Guy (class of 2005) as “the guy who inspired me” before the duo dueled to the delight of the crowd. ZZ Top’s Billy Gibbons (class of 2004) was Beck’s final guest, leading Beck and band through his own “Rough Boy” before trading guitar licks on a fiery version of the Jimi Hendrix classic “Foxy Lady.” Beck and company closed their set with a powerful read of the Beatles’ “A Day in the Life.”

Metallica
“We are Metallica and this is what we do,” declared singer-guitarist James Hetfield (class of 2009). It would have been hard to argue the point as the band opened with a ferocious “For Whom the Bell Tolls” followed by the intense “One.” A knock-out version of Bob Seger’s “Turn the Page” was introduced as “this is one of the songs we wish we wrote.”

Before introducing their first special guest, Hetfield commented “Lots of names were suggested but we’re not the most jamming kind of band.” Au contraire, Mr. Hetfield. Contrary to a comment made later in the evening (see below), Metallica was the night’s best house band. Just ask Lou Reed (class of 1996), whose “Sweet Jane” hasn’t sounded so visceral in years. Reed appeared to have developed a special bond with drummer Lars Ulrich as the two frequently locked eyes while burning through Reed’s “White Light/White Heat.” As the crowd caught its collective breath, Hetfield remarked, “That was fun. Well, we’ll clean up Lou’s mess here.”

Next up, Ozzy Osbourne (class of 2006). The “Prince of Darkness” stalked around the stage for Black Sabbath’s “Paranoid” and “Iron Man.” Both singer and band appeared to be reveling in the moment.

“We got schooled on early, early riff-rock,” said Hetfield by way of introducing the Kink’s Ray Davies (class of 1990). The band then breathed new life into the Kink’s classics “You Really Got Me” and “All Day and All of the Night.” Similar to the earlier performance with Reed, the band was a mighty force.

U2
Closing out two days of phenomenal performances and extraordinary performances has to rank among the toughest spots is the history of rock. Who better to fill the slot than U2 (class of 2005)? Despite a disappointingly short set, the band more than rose to the challenge with help from a few special guests.

The set begin with a bang as the band tore through “Vertigo” and “Magnificent.” Then things got interesting.

“This is a song we wish we’d written,” declared Bono, “It’s a Bruce Springsteen (class of 1999) song, so we’d like to ask him to come out here. It’s also a Patti Smith (class of 2007) song, we’d like to ask her to come out here.” The performance got off to a dramatic start as E Street Band pianist Roy Bittan played the brooding piano intro to “Because the Night.” Alas, the wheels came off when Smith and the rest of the band misplayed their entrances. No one said that rock was easy. Given that the show was being recorded for broadcast on HBO, they gamely tried it again to the delight of the crowd.

Smith departed but Springsteen stuck around for a spiritual take on U2’s “I Still Haven’t Found What I’m Looking For.”

“Here’s a little Irish dance music,” said Bono by way of introduction to “Mysterious Ways.” The band got through most of the song before the members of the Black Eyed Peas joined them on the stage and the song segued into the Peas’ “Where Is the Love.” Bono, enjoying the moment, stepped back to let the Peas enjoy the limelight before stepping forward as the song morphed into U2’s “One.”

As the band broke into a haunting and familiar guitar intro, Mick Jagger (class of 1989) stepped onto the stage to join in a rousing version of the Rolling Stone’s “Gimme Shelter.” With all due respect to the boys in the band (including the Black Eyed Peas’ Will.i.am), the song belonged to Fergie that night. Her vocals pierced the room as she wailed, “It’s just a shot away.” Brilliant.

Before he left, Jagger swapped vocals with Bono on U2’s “Stuck in a Moment You Can’t Get Out Of” before the band, sans guests, finished up with “Beautiful Day.” And it was.

For a report on Night One of the Rock Hall of Fame 25th Anniversary awards, check out part 1 (Crosby, Stills and Nash; Paul Simon; Simon and Garfunkel) and part 2 (Stevie Wonder and Bruce Springsteen).