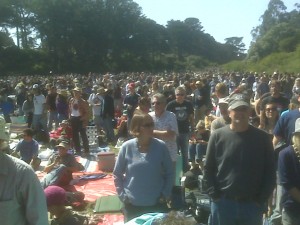 Move over Bonnaroo.  Step aside Coachella.  With crowd estimates hovering around 750,000 this year, Hardly Strictly Bluegrass is now the country’s largest music event.  And it’s free.  Three days, 6 stages, 80 acts with a broad range of appeal, all courtesy of Warren Hellman, a local investment banker and philanthropist.  With that many sets of music and crowds of that size, even trying to see a majority of the bands is folly.  Bearing that in mind, here are some of the highlights for me this year.

Best Band Masquerading As Another Band.  Rosie Flores and Jon Langford played a great set late Saturday afternoon.  It was filled with a wide variety of musical genres and pointed out just how much a polished stage presence can add to a show like this.  Although I’m sure they started with a set list, they were clearly making some ad hoc decisions along the way, like doing a second Johnny Cash number when the crowd showed appreciation for the first Cash tune.  Oh, and the backup band, advertised as the Pine Valley Cosmonauts, was none other than The Sadies.

Zen Of The Moment Medallion. Being the first band up at 11 in the morning can be a challenging gig.  Some of the audience is there for a later act and doesn’t care.  Some (many?) are still nursing the remnants of last night’s fun.  Plus, you have to do a sound check about the time you might normally go to bed.  So while Elvis Perkins in Dearland certainly came to the stage with enthusiasm and a get-up-and-going set of songs, this award goes to Great American Taxi.  While they normally cop to being a more raucous band, lead singer Vince Herman looked around at the setting and the crowd and pronounced themselves a hippy country band.  The set featured several neo-70’s-Eagles-type tunes that easily slipped into the vibe of the morning.

Best Nostalgic Moment. Booker T. Jones joined the Drive-by Truckers for a live variation of one of this summer’s popular albums, Potato Hole.  Although not quite the MG’s, the Truckers did a fine job of laying down a beat for both older Booker T songs as well as Truckers material and songs from the collaborative effort.  The crowd was up and dancing for much of the set.  But toward the end, Booker walked up to the microphone and talked about being in Monterey 40 years ago with his friend Otis Redding.  He then lit into Sittin’ On The Dock Of The Bay.  The hush of the crowd gave way to a soft sing-along, and finished with tens of thousands of people whistling along.  Words don’t do justice to a special moment like that.

Laying Down The Groove Award. One year ago at HSB ’08, Dave Alvin took to the stage for the first time with a collection of awesome musicians labeled The Guilty Women.  They’d never played together before, but hit it out of the park nonetheless.  Fast forward a year: they did one of the year’s best album, and they’ve been touring relentlessly.  Although the tragedy of losing a friend, Chris Gafney, that started this particular path for Alvin continued last week with the death of fiddler Amy Farris, you couldn’t tell it from the performance.  The rhythm section of Lisa Pankratz, Sarah Brown, and Cindy Cashdollar was laying down a groove that was old school.  Think the Funk Brothers of 60’s Motown fame or the Swampers from Muscle Shoals in the 70’s.  Celine Dion would sound funky and bluesy with these gals putting it down.

Best Act I Didn’t See. I’m disappointed I didn’t see Neko Case, but by late Sunday the thought of jostling with 100,000 people for every square millimeter of space at her stage was more than I could tolerate.  As for ones I don’t have an excuse for, the winner has to be Buddy Miller.  I caught a couple of songs in his set, and I knew Emmylou Harris was likely to sing a few duets given their decades long friendship.  But who knew Robert Plant was going to show?  Honorable mention to Gillian Welch having Emmylou and Old Crow Medicine Show for a couple of tunes.

Golden Gate Park works so well for an event like this, the crowd manages to maintain a tolerance for the morass of fellow human beings that doesn’t always exist elsewhere, and the musicians love the event.  So once again, HSB put a brilliant end to the festival season.