I’ve mentioned previously that one of the reasons I’ve been going to SXSW for 10 straight years (which is to say, 11 South-bys) now is in search of those only-at-South-by moments of pure magic. Of the magical South-by moments that I’ve been privileged to witness over the years, more than a few have involved the incomparable Alejandro Escovedo, but this year‘s instance may very well have topped them all.

I should mention that the first time I saw Alejandro (well, not counting a Buick MacKane show at the 9:30 Club in D.C. in 1997) was on the Sunday night of the first South-by I attended, back in 1999. More than anything else about that first pilgrimage to “rock ‘n’ roll spring break,” it was the amazing show that the Alejandro Escovedo Orchestra performed at La Zona Rosa that night –a show which served at that time as the official “closing ceremony” of South-by– that sealed my fate to heed the siren’s call to Austin every March.

That 1999 performance was not only the final official Sunday night Alejandro Escovedo SXSW closing ceremony (thankfully, the closing night tradition continued, it just moved to the Continental Club as an “unofficial” show the following year, and that hallowed venue has been its home ever since) but, as I understand it, it was also the last-ever performance of the Alejandro Escovedo Orchestra.

Until this year, that is.

I got the word a few weeks before South-by began this year that Alejandro would be reassembling the Orchestra for a single performance on Friday night at the annual block party known as South by San Jose. As you might imagine, I was positively ebullient over that news. And there it was: the one damn-the-torpedoes, I-don’t-care-who-else-is-playing-elsewhere, absolutely un-missable show of the year. To say that my expectations were high would be an understatement in the extreme. As I stood in the parking lot of the Hotel San Jose in south Austin on the evening of the first day of spring (and what a perfect spring day it had been too) watching the band set up and realizing that there would be a four-piece horn section, my anticipation and excitement suddenly reached new heights. You see, I’m an absolute fiend for horns in my rock ‘n’ roll … the combination represents the musical equivalent of peanut butter and chocolate as far as I’m concerned.

Should I have been concerned about an inevitable letdown given the admittedly ridiculously high expectations I had for this show?

Playing under the stars on a beautiful spring evening in south Austin, the Alejandro Escovedo Orchestra played not only the finest show I saw at South-by this year, but one of the finest shows I’ve seen in my entire life. (As I approach 40, the total number of shows I’ve seen has comfortably numbered in four figures for years now.) This was one of those for-the-ages, continuously goosebump-inducing, all’s right with the world, and by god, it’s great to be alive right here, right now nights of live music. What I’m trying to say is that this was a king hell slab of rock ‘n’ roll salvation. If you were there, I can’t imagine you’ll ever forget it. It was that special. If you weren’t there, however, I’ve got some great news for you: the entire show was filmed for release on DVD. I don’t know any further details, but there were a minimum of six cameras (one crane-mounted, two stationary, and three handheld/mobile) documenting the phoenix-like rebirth of the Alejandro Escovedo Orchestra. 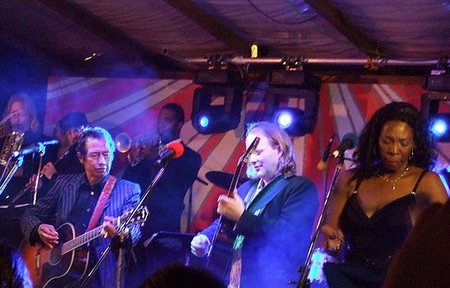 So, the Orchestra. In addition to Alejandro and the aforementioned four-piece horn section, augmenting the current lineup (violin, cello, guitar, bass and drums) and rounding out the 15-piece (16-piece on “Sensitive Boys” when Amy Cook joined on vocals) Orchestra were two additional percussionists, a keyboard player, and two backup singers.

My notes from the show read like a gushing schoolgirl (the horn section played on every song!), and I’m just going to throw caution to the wind and include some of my unedited notes as commentary to accompany the setlist below:

Sister Lost Soul (“for Chuck Prophet,” this was a particularly gorgeous performance in a show that was filled with them)
Juarez / Rosalie
Sensitive Boys (“goosebumps again”)
Chelsea Hotel ’78 (“not only the best but also the loudest Alejandro show”)
Real Animal (By way of an introduction, Al asks, “Who remembers Iggy Pop? Let’s put it this way: who can forget Iggy Pop?” In the Orchestra arrangement, “Real Animal” is truly a rock ‘n’ roll juggernaut.)
People (Al prefaces this one by saying that the coolest thing he/they did last year was to play this at the Democratic National Convention. “It’s called ‘People,’ and it’s about all of you.”)
Everybody Loves Me
Velvet Guitar
Castanets (This set-closing trio was so captivating that I didn’t write a word in my notebook, save for the song titles themselves.)

The Golden Age of Rock and Roll (“We’re gonna try a Mott the Hoople song we’ve never done before.”)

Too Little Too Late (A Doug Sahm cover that Al has recoreded with Nic Tremulis for a Sahm tribute record; “both of these covers are great and Al sings his heart out on ’em.”)
Slow Down (As with “Always a Friend,” “Slow Down” features the horns playing the parts done by the strings on the recorded version. “Gorgeous.”)
Sway (Prior to playing this Rolling Stones cover to end the show, Al took a minute or two to confer with the band, announcing “we’ve never played this one before.” Well, you’d never have guessed, because this unrehearsed performance was the best version I’ve ever heard, and I’ve heard some stunning versions before. My notes include the following descriptions: “Sublime,” “Awe-inspiring,” “Jaw-dropping.”)

As the final notes of “Sway” drifted into the south Austin evening, an hour and forty-five minutes after the show began, the monumental concert drew to a close, leaving those of us in the audience positively in awe … and anxiously awaiting the DVD release so that we might revisit this magical night in something more than memories and YouTube videos.