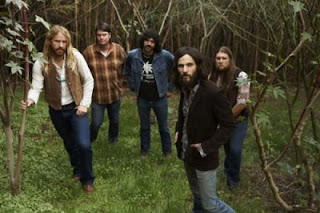 It is a digital world, mp3s are our music, the internet provides our news, and we can read on multiple devices. Oh and by the way we are connected wherever we go. Digital communication is the best …. Or is it? Along comes Whispering Pines. They take us to their world of analog recording. The band is based in California, and their music brings to mind The Byrds, The Band and Gram Parsons. Listening to the self-titled second album by Whispering Pines, makes the listener revisit the days when Country and Rock were becoming kissing cousins. There are all out slide guitar rockers like “Fine Times” and songs that utilize Byrds influenced Harmonizing vocals. “Love is Free” is an up tempo Jam that brings the keyboards to the front. While “Come and Play” is the most singular representative of the music on the album. It begins as a country song and gradually evolves into mid-tempo Rock and Roll. The opening song “Move On” will reach out and grab you. Then the songs that follow will not let you go.

It is not a long album. It clocks in at just under 40 minutes and has only 10 songs. In fact, four of the songs are less than 3 and a half minutes. Whispering Pines would not be able to claim their California roots if they did not know how to jam. Fortunately “Purest Dream” shows that indeed they are fully immersed in the California Roots Rock tradition. Perhaps the most impressive aspect is that all four band members write and sing their own songs on the album. Such virtuosity allows every song on the album to stand on its’ own. However, Whispering Pines do not lose site of the fact that they are a band. Thus all of the songs work together and fuse the individual talents
of the band members together.

So go down to your local record store and hit the vinyl section. Read an actual newspaper, and get a book that requires you to physically turn pages. (You can steer clear of listening to eight track tapes though.) Whispering Pines has provided a reminder that digital is not always better.