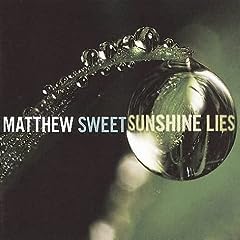 “’cause we’re already good and we’re already evil, unfazed by a world of constant upheaval,” sings Matthew Sweet on “Let’s Love” from his latest release. It’s a moment that carries meaning beyond the song’s intended topic. In the nearly fifteen years since Sweet’s seminal Girlfriend, the music business – and the world for that matter – has changed. Yet here is Sweet returning from an extended solo hiatus to reinvigorate us with his inspired blend of sunny 1960’s pop melodies and boisterous guitars. Sweet establishes his presence early with the determined “Room to Rock”, a song that lives up to its title with a torrent of blistering guitars. That leads directly into lead single “Byrdgirl” which has all of the jangle that one would expect given the title. “Burn Through Love” and “Around You Now” both hit the mark with the rich harmonies and distinctive guitar interplay that are a Sweet hallmark. “Feel Fear” highlights another of Sweet’s longtime strengths, his ability to craft a ballad that mixes melancholy and urgency in both lyrical and musical context. Sweet may be a bit more reflective since we last heard from him but he’s no less potent. It’s good to have you back, Matthew.

This City (Is Bound to Do Us In), The Break and Repair Method (from the Bluhammock Records release milk the bee)
Another entrant in the moonlighting bandmate discussion finds Matchbox 20 guitarist/drummer Paul Douchette releasing his solo debut. I had a tough choice between this and lead-off track This City. Centered around Douchette on keyboards, both songs are filled with immensely hummable melodies and are musically light and breezy.

GfC, Albert Hammond, Jr. (from the Red Ink release ?Como Te Llama?)
Strokes guitarist Hammond stretches out on this impressive rocker from his second solo release. A distinctive guitar anchors the song but it’s the dark and moody melody that instills this track with its energy.

Stuck on the Corner (Prelude to a Heart Attack), Todd Snider (from the album Aimless Records release Peace Queer)
Snider rumbles through the barroom with this raucous gem. The interplay between Snider’s rat-a-tat vocals, a plinky piano and a fuzzy guitar make this a party song despite its lyrical venom. “We’re stuck on the corner of sanity and madness, we’re looking ‘em over, we can’t see a difference.”

Don’t Say a Word, Phantom Limb (from the Naim Edge Records release Phantom Limb)
This was a 2008 SXSW miss. Doing some computer clean-up I stumbled on this track. It’s been haunting me ever since. It would be easy to highlight singer Yolanda Quartey’s brawny voice as the centerpiece of the song. I’d defer, however, to the brooding mix of soul and gospel that is utterly intoxicating.

Waving Flags, British Sea Power (from the Rough Trade release Do You Like Rock Music?)
A rock epic from this quartet from England. A wall of sound built around symphonic guitars and a backing choir only add to the majesty. Bonus points for a great band name.

We Should Fight, Ezra Furman & the Harpoons (from the forthcoming Minty Fresh release Inside the Human Body)
Furman bears more than a vocal resemblance to the Violent Femmes. Decide for yourself as you enjoy this raw rock song that showcases Furman’s sharp angled lyrics.

FROM THE ARCHIVES
The Trouble With Love, Dog’s Eye View (from the 1997 Sony release Daisy)
“Love is blind, baby, deaf, dumb and stupid. If I ever find that little turd, I’m going to kill cupid once and for all… The trouble with love is that just when you’re sure you’ve got it all figured out, then you know you don’t know anything about love.”