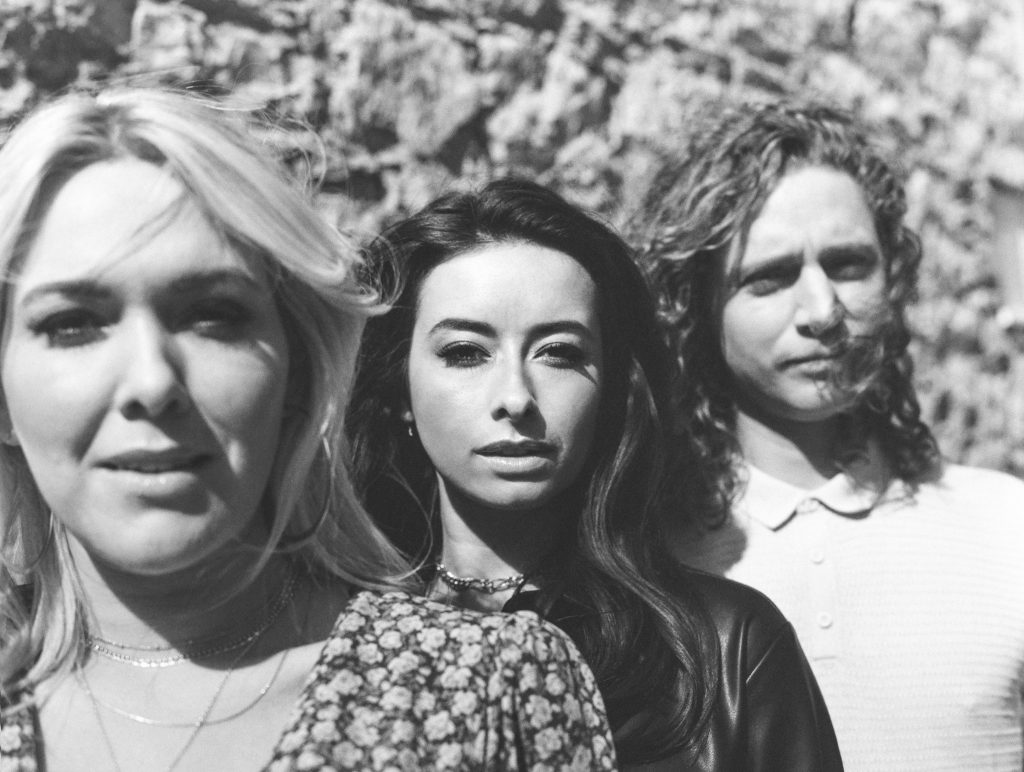 Our tour vehicle varies, depending on where we are. In the UK, we’re in a rented splitter van with the extended band and crew but when we’re in the States, we usually play acoustically and hire a car and drive ourselves when possible. It’s made for some tight squeezes but amazing to see so much of the country, from the snowy Catskills to the California beaches. We cannot wait to get back over and play more and explore more. No breakdowns fortunately but we have got stuck in the mud a few times, memorably at Secret Garden Party Festival in the UK! Mud at summer festivals over here is definitely a hazard haha.

Between us, we have a vegan and someone who can’t have gluten, so we try to make choices we all can enjoy – salads and vegetables naturally feature heavily. And our taco game is strong – we have everyone covered! When it comes to healthy and cheap, we try to get some good nibbles on our rider but sometimes our diet can be a little tortilla chip heavy! We are all into food and love getting to check out the local scene wherever we are in the world and hunting down the best vegan spots.

When it comes to buying strings, you kind of have to plan for how many you COULD break, not how many you will. Of course, we hope we don’t break them during a show but it does happen and you just have to be prepared for the worst case scenario when you’re touring. And then hope it doesn’t happen! Prices vary but often end up paying between 8-15 quid a set. Some people pay more… We are really lucky to have our friends at Gibson look after AJ and Chess with guitars and mandolins when we’re touring – they’ve been amazing to us.

We rehearse at The Premises in Hackney, east London. The Premises plays a huge part in our lives and careers and we love everyone there. It is a true home from home, with the best studio cat – Doris. We also created and wrote a lot of our new album there which makes it all the more special. We can’t wait for everyone to hear it and to get back into The Premises and rehearse for our shows later this year. It’s been too long!

We have had many crazy experiences in that place. We are often the last ones there getting kicked out or on the odd occasion having a lock-in after hours…but you didn’t hear that from us…!

One of the first songs we wrote together as a band was “Wish I Could”, from our debut album Wild Silence. We had other songs on the go when we wrote it but they were generally songs that one person had brought to the table and we added harmonies to. “Wish I Could” was our first real collaboration.

The first gig as The Wandering Hearts was in a speakeasy in the London Bridge arches, called Cecil’s. It was amazing but looking back at it now, hilarious. We were very, very nervous. We hadn’t ever sung together in front of an audience before and didn’t know what to do with ourselves. Tara and Chess just gripped the mic stands for dear life and did not let go for the entire gig! We played everything at a million miles an hour. We have come a long way since then and played a ton of shows! We are so thrilled to be releasing our second album – who would’ve thought it after that first gig?!?

We have all done various jobs in the past, as you do! We have been fortunate that the majority of those have had something to do with singing or music. One of Chess’s most memorable – for all the wrong reasons – was being a shot girl in London. Basically, going round bars and selling shots of liquor. She lasted three weeks and made a lot of money in that time but it was one of the worst jobs any of us have had – and the hardest.

We have been very sensible. We have managed to make a living (just) in music over the last five years and kept our business afloat. We have never just paid ourselves lump sums of money when we have got advances, we have really stretched that money as far as it could go, so at times it’s meant we haven’t always had a lot of money in our pockets personally, but we’re still able to put on shows and make music. Hopefully 5-10 years from now, we will be doing the same thing maybe with a few extra pennies in our pockets but if not, we will still be here, making music and being happy about that.

Truly grasping the power of saying NO to people. When you’re young and naïve, you’re much more easily led and can end up agreeing to all sorts of things that you think (or are told) will help your career. Often, these things lead you down a path that you might not have chosen for yourself or may later regret. Of course, it’s all a learning curve but saying NO sometimes is more important and more powerful than saying YES.

Harmony-laden Americana band The Wandering Hearts burst onto the scene in 2018 with their debut album Wild Silence. Discovered a mere 30 mins after uploading their first track to Soundcloud, the London-based band had a whirlwind 2018. They won the coveted Bob Harris Emerging Artist Award at the UK Americana Awards before heading out on a sold-out album tour.

After being personally invited to the US by music legend Marty Stuart, The Wandering Hearts became the first UK band to debut at two of the most prestigious venues in Nashville – The Ryman Auditorium and The Grand Ole Opry – in the same week. Receiving a rapturous welcome and standing ovations, the band were invited back to the Opry the following week, after a trip to Memphis to support Marty Stuart at Graceland.

A busy summer of UK festivals followed, including Latitude, Black Deer and BST Hyde Park, before the band whipped back to Nashville for Americanafest, then returned home to finish the year with their second sold-out UK headline tour.

The band is now preparing to release their self-titled sophomore album on August 6, 2021. Connect with the band online and on the road.