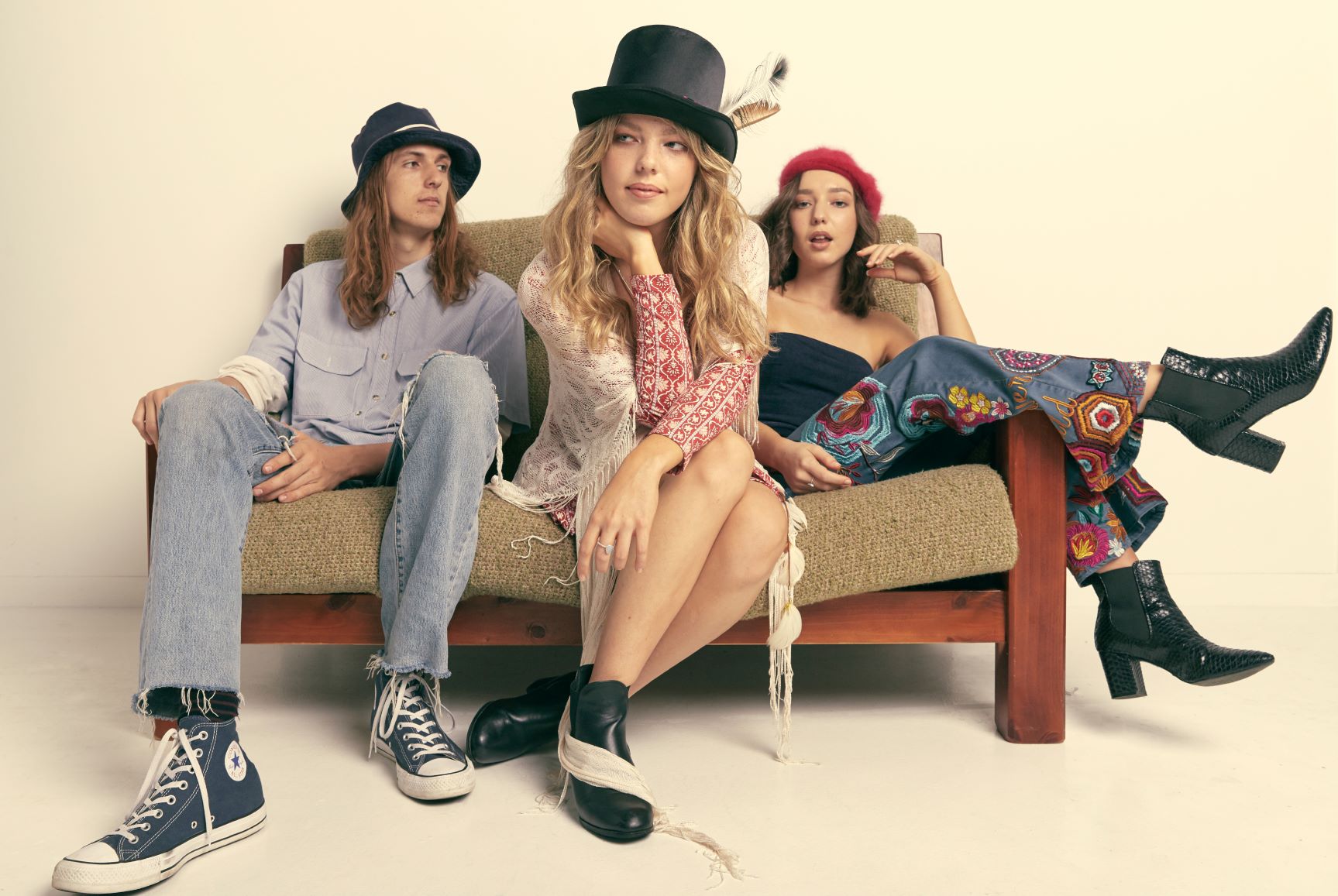 Lachlan: Our tour car / only car is a nice, long Ford Falcon wagon which has gained 60 thousand kilometres since we bought it last year! Nothing fancy but something that survives through the tough trips we give it. She’s gone quite well actually with no major repairs, however, it likes to give us a bit of pay back every now and then.

One time we were heading off to the Tamworth Country Music Festival (8 hrs away) the day after shooting our ‘Money’ music video and as the band was waiting for me to fill the gas tank up one of the tyres decided to go flat! As I was changing it in the blazing sun, we also remembered about the photo shoot in 5 hours… We were literally only 1 minute into the 8hr trip, soooooo yeah that was cool.

Molly: None of us really love fast food and we don’t live in an area that has it, so we always prefer healthy, feel good food. We try our best to get fresh fruit and if were touring by car it’s fun to stop at those tiny family owned stalls on the side of roads! We also make an effort of scout out petrol stations on our route that have food on the healthier side (Oliver’s is a good one). It’s definitely a challenge to keep up a healthy lifestyle/ diet when touring but practice makes perfect and we want to keep practicing that’s for sure 😉

Sarah: It’s actually a running joke on stage and in rehearsals when I break a string because it happens so often! I’ll give you the luxury of doing the math because I break a string pretty much every 2nd show and it’s been a regular occurrence since I started playing. The ideal strings are usually around $40 but because I break them so often, there’s really no point getting the expensive no-rust ones since they won’t last long enough to rust…Generally I keep a couple good quality full packs and then buy cheaper low E and G strings in bulk (as there the one’s that break all the time)! Whilst it’s annoying, I kinda like breaking strings because it makes me feel like I’m really playing into my guitar and it means I’m playing it a lot!

Lachlan: Honestly breaking strings is like stubbing your toe, you never know when it’s going to happen. It happens way too often and I don’t even want to think about how much money I’ve spent on strings… too much!

Sarah: Our rehearsal space is right, smack, bam in the middle of our house and there’s 6 of us that live here so it’s often quite chaotic. Our rehearsals are usually in the evening so it’s pretty funny when mum’s making dinner, Dylan (our little brother) has his video games on and dad’s probably just trying to find some peace and quiet somewhere. Some would say our neighbourhood is in conflicting opinions because we do get some noise complaints which results in us closing every single window and door in the house (it gets really hot in Summer!), but on the other hand some neighbours want us to crank everything up louder! So, we beg the question, “WHAT SHOULD WE DO?”.

Molly: The first song Sarah and I wrote, I was about 9yo and Sarah around 12yo. We lived on a farm at the time and it was about our neighbour who lived over the hill… The man, the myth, the legend, ‘Hillbilly Robbie’. He taught and introduced me to the mandolin and he’s such a classic character, so we HAD to write a song about him. ‘Hillbilly Robbie’ was one of our first ever songs we put out and it channels some hardcore bluegrass vibes, one of the lines being “He’s a banjo pickin, hillbilly singing, honkey tonk down the road” so I mean… enough said!

You’ll actually see a snippet in our upcoming documentary ‘Meet The Buckleys’.

Sarah: Well we’ve been playing all our lives whether I’d be jumping up on stage at one of our dads shows, or playing at a local jam night, so it is hard to pinpoint an exact first gig. However, one of The Buckleys earliest gigs would’ve been the ‘Wintersun Rockabilly Festival’. We actually played live on the back of a flat top truck in a street parade! As I am writing this it’s occurring to me how bizarre that sounds but it was honestly one of our favourite yearly gigs to do… Minus the 5.30am wakeup call. Everyone dressed up in 50s/60s rockabilly gear and we would just jam Elvis Presley, Chuck Berry, Brian Setzer songs and so many more legends of that genre.

Lachlan: Working at a distillery and farm. When I’m not making whisky I’m pretty much just working out on the field. It’s a really nice place to work in the hinterlands of Byron Bay so you won’t hear much complaining from me… Definitely my favourite day job but can’t wait till I can just be playing music full time.

Sarah: It’s really not about the money for us, we just love playing music and if we can make a living from it, what an incredible thing! I guess most of the money comes from touring and because we write all of our songs, royalties. The goal is to keep writing the best songs we possibly can and for people all around the world to relate to them; And we LOVE touring so playing as many shows as we can and reaching as many people as we can. We’re always looking at the bigger picture so even if something takes a hit at the bank, we are working towards our dream so it’s worth it! Every musician / entrepreneur makes financial sacrifices for their passion and goals, it’s just what you got to do.

Molly: Just to follow our gut/ vision and stay true to it. We try our best to see situations as ‘gain disguised as loss’ and ‘look at the glass half full’ so every situation that could be seen as a negative, we really try to flip it around. So many times in our career when we thought something was a negative, it’s lead to something even better than we could have imagined. Everything happens for a reason. It’s also super important to surround yourself with people that are passionate, optimistic and make you want to do better… don’t listen to the naysayers!

Consisting of Sarah Grace (Lead Vocals and Acoustic Guitar), Molly (Vocals, Mandolin, Piano/Organ) and Lachlan (Electric Guitar), The Buckleys are a chart-topping teenage sibling trio from Byron Bay, Australia. Their hit single ‘Daydream’ raced up the Official Australian Country Radio Chart, landing at #1 and achieving mainstream radio crossover success as well. The track scored them an Australian Country Music Association Award nomination (The Golden Guitars) for “Best New Talent” and spent the most weeks at #1 (six in total) then any other song that year on the KIX Country Network.

The trio just released “Money”, their debut worldwide single. Connect with The Buckleys online and on the road.